Drunk On Ink Q & A with Kristen Miller Zohn and “The Currency of Taste: The Gibbons Georgian Silver” 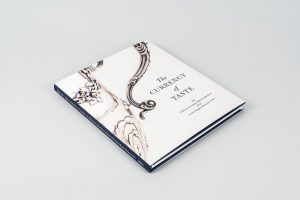 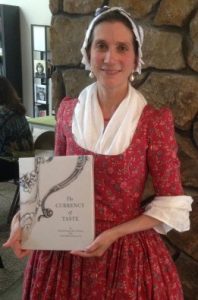 Art historian Kristen Miller Zohn lives and works in Columbus, Georgia, where she is the Executive Director of the Costume Society of America.  She also serves as Curator of Collections and Exhibitions for the Lauren Rogers Museum of Art in Laurel, Mississippi.  Ms. Miller Zohn has an M.A. from Florida State University and a B.A. from Salem College in North Carolina, both in Art History.  She is a 2016 graduate of The Summer School of the Attingham Trust for the Study of Historic Houses and Collections.  Miller Zohn has written numerous exhibition catalogues and is a contributing author to Central to Their Lives: Southern Women Artists in the Johnson Collection (Columbia: U of South Carolina P, 2018) and Grandeur of the Everyday: The Paintings of Dale Kennington (Tuscaloosa: U of Alabama P, 2017). She has published articles about Jane Austen and the visual arts in Jane Austen Society of North America (JASNA) publications, Persuasions and Persuasions On-Line.

About  The Currency of Taste: The Gibbons Georgian Silver Collection of the Lauren Rogers Museum of ArtT.

Kristen Miller Zohn’s most recent publication is The Currency of Taste: The Gibbons Georgian Silver Collection of the Lauren Rogers Museum of Art.  This full-color, 136-page book explores silver implements associated with dining, drinking, and luxury. The publication offers insight into the production, use, and aesthetics of Georgian silver.

First author/book you read/fell in love with? Why?

The Monster at the End of This Book: Starring Lovable, Furry Old Grover by author Jon Stone and illustrator Michael Smollin.  Grover reads the title and begs the reader not to turn the pages, but the monster turns out to be him.  I loved Sesame Street and Grover in particular, and this book was read to me in a most dramatic fashion. I also adored Beatrix Potter’s Peter Rabbit series , because our library had diminutive vintage editions with green hardback covers, and I loved them as objects.

Wine, or even better, Bourbon

Tell Us About Georgian Silver

The Georgian period in British history is regarded by many as the pinnacle of elegance and refinement in art and architecture, and it produced some of the finest silver and other decorative arts ever made. In order to live in polite society, a Georgian needed to possess “taste,” or the ability to recognize and appreciate beauty and excellence, which they showed off with expensive possessions such as silver objects. Moreover, the gustatory pleasures of the beverages and foodstuffs involved in sumptuous Georgian meals were enhanced by the visual aesthetics of these objects.  Georgian silversmiths used the diverse styles of the 18th and early 19th centuries (Baroque, Rococo, Neoclassical, Regency) to produce multitudes of silver objects, from the simplest of spoons and the plainest drinking vessels to elegant personal objects and dramatic table centerpieces. 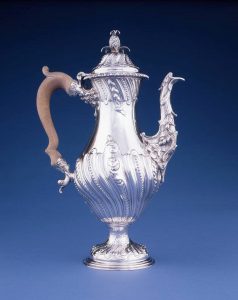 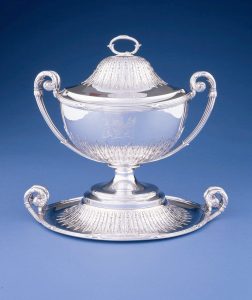 A Lauren Rogers Museum of Art purchase in memory of Thomas M. Gibbons 76.10

I can’t think of anything that should be universally mandatory, but I would suggest that everyone should have their own favorite of each.

Middlemarch by George Eliot. I started it three times, the first in my teens, but could never get past the first few chapters. It is too verbose for my taste.

From the chapter on Silver for Alcohol and Other Household Luxuries: “Madeira was Thomas Jefferson’s favorite wine, and it was used to toast the signing of the Declaration of Independence, thus signaling the end of Georgian rule in America.”

The 1995 Pride and Prejudice produced by BBC. The almost six-hour length allowed the inclusion of most of the plot and dialogue, and the casting, costuming, set design, and score were all spot-on.

Dog.  I am partial to the Italian Greyhound, a miniature breed. 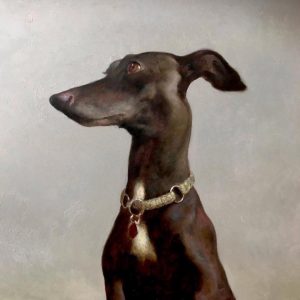 What is your favorite painting/art piece?

As an art historian who has seen multitudes of artwork, it has always been hard for me to choose a favorite. Until recently, that is. The painter Bo Bartlett is known for large-scale figurative pieces, and pet portraits are not part of his oeuvre. However, he repaid a favor from me by producing a portrait of my dog Enzo. It is absolutely the best painting I have ever seen!

Traveling to any location with excellent museums, architectural history, and foodways.

The Birmingham Museum of Art’s The Look of Love: Eye Miniatures from the Skier Collection by Graham C. Boettcher, cover design by James Edward Williams. 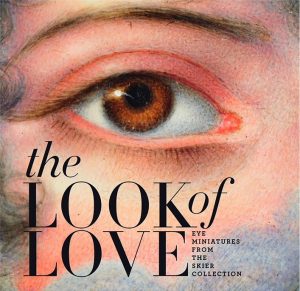 Blackbird by The Beatles

In 2012, Dr. Cornel West was one of the speakers at JASNA’s Annual General Meeting. His enlightening presentation “Power and Freedom in Jane Austen’s Novels”  was like a sermon, and we all felt so proud to be Janeites after hearing him speak. Later, as he stood for pictures with his new acolytes, he called us sisters and brothers, and bent his tall body down so that his face would be on the same level as ours. He is a very gracious person.

JASNA’s journal Persuasions is excellent, and Nathan Moehlmann at Goosepen Studio & Press does amazing work in graphic design, book design, and production.  He designed and produced The Currency Of Taste.

Citizen Emperor: Napoleon in Power by Philip Dwyer because I thought I’d see what the French were up to during Austen’s life.

FROM: BLOG
? Chaitali Sen and ‘The Pathless Sky’
Drunk on Ink Q & A with Kristen Miller Zohn and “The Currency of Taste: The Gibbons Georgian Silver” ?
No comments yet