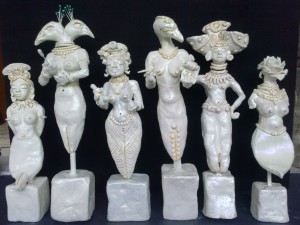 New York based artist Jaishri Abichandani is working on a stunningly expressive series of 108 sculptures inspired by figures of goddesses from the Indus Valley. The series, entitled Before Kali, plays with notions of womanhood and depicts goddesses in various roles and gestures – squatting, standing, sitting, birthing, seducing, conversing. The image of the vagina, petal like and slitted, figures prominently in many of the sculptures. 56 of the 108 sculptures have been completed. Three are on display now at the Queens Museum of Art. See more here:

Literature that Reflects the Politics of Its Time.

Renuka Rajaratnam argues in The Hindu that the Indian novelists of the 80s and 90s championed Nehruvian ideas, whether intentionally or not, in response to the Emergency imposed by Indira Gandhi. She discusses, amongst other novels, Rushdie’s Midnight’s Children, Vikram Seth’s A Suitable Boy and Shashi Tharoor’s The Great Indian Novel. For me, however, it is Rohinton Mistry’s A Fine Balance which stands out for its powerful depiction of the atrocities forced upon Indians during the Emergency (castrations, anyone?), as well as how people from disparate socio-economic backgrounds come to live together and grow to respect and even love each other (the final scene is a microcosm of individual against authoritarian rule beautifully depicted through one woman and her domestic setting).

“Fiction of the 1980s and the 1990s demonstrated the role of English in embracing secular modernity to move beyond the pigeon-holes of caste and tradition. In Rushdie, we note the use of linguistic excess, particularly in the Midnight’s Children, symbolising the democratic mingling of all linguistic forces and the ‘chutnified’ outcome of English when spoken alongside other bhashas (languages).

Salman Rushdie’s Midnight’s Children is a powerful anti-Emergency narrative and can be in many ways — alongside Vikram Seth’s The Suitable Boy — seen as a Nehruvian epic. Where Rushdie dismantles the idea of a single national identity through a minoritarian perspective, Seth’s novel is an explicit endorsement of Nehruvianism and strongly opposes a way of imagining the nation on religious terms. Similarly, Rohinton Mistry in his A Fine Balance engages deeply with the issues of the State and offers a relevant critique that is more reformative rather than revolutionary.” read rest here 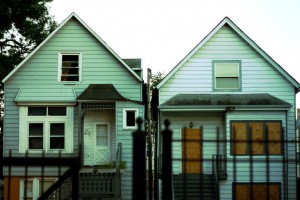 Strife between India and Pakistan over Kashmir stretches back to the era of Partition, and it’s a history filled with contention and the dissonance of politicians, cultural critics, religious scholars, and Western “experts.” Hence, it’s incredibly pleasing to hear from not only professional analysts but also “common people” on what it’s like to live in a conflict zone. The Kashmir Walla is a monthly digital journal on the arts, politics, and society of Asia and the Middle East, focusing upon expressions of dissent within the broader context of conflict while seeking to bring a more nuanced understanding of ordinary lives amidst these regions. The November 2013 issue contains a haunting photoessay of grand homes abandoned by Kashmiri Pandits during periods of escalating violence. Stark black and white images captured by photographer Muhabit al Haq are accompanied by text from writer Siddhartha Gigoo. Image and text catapult the reader into a milieu of houses still waiting, bereft of loving owners and the sounds of everyday life:

Nothing escaped me. The conversations stuck to my walls like tattoos. Grandmother roasted chestnuts in firepots. The fragrance is still trapped in my bosom. Well, to be honest, some of it has faded away over the years. The long and desolate winters stole it. I saw myself through the eyes of my family. I saw my reflection in their dreams. I was beautiful.

The Crossword Book Award, only open to Indian citizens, is awarded in a variety of categories.

The 2013 awards were given to the following books

Boats on Land by Janice Pariat

Em and the Big Hoom by Jerry Pinto

From the Ruins of Empire by Pankaj Mishra

A Life in Words: Memoirs by Ismat Chugtai translated by Dr. M Asaduddin

Book Uncle and Me by Uma Krishnaswami

The Bankster by Ravi Subramaniam

Commonwealth Writers sat down with Pakistani novelist Nadeem Aslam and asked him some very interesting questions about politics and ideas and whether there is place for them in fiction, a need for them even, as well as what defines him as a writer.  Watch his interview here.