Drunk On Ink Q and A with Aruni Kashyap and ‘There Is No Good Time For Bad News’, poetry collection 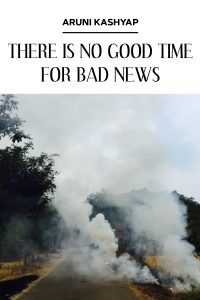 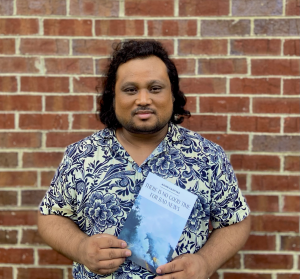 Aruni Kashyap writes fiction, poetry, essays, tweets, Facebook posts, screeds, in Assamese and English. He is an Assistant Professor of Creative Writing and English at the University of Georgia and lives in Athens, Georgia.

About There Is No Good Time For Bad News

There Is No Good Time For Bad News is a collection of poems that depict, through oral histories, narratives of survivors, on what it means to live under the duress of an authoritarian state. Poems that attempt to show the possibilities of storytelling when it intersects with the discourse of human rights and justice. Poems that draw heavily from oral history, folktales to critique the modern state’s abuses of power.

ARUNI KASHYAP: Jun Beli, Tora Aru Onyanyo by Dipti Dutta Das: a feminist auto fictional work set in a small town called Golaghat in the state of Assam in India. It is a town I love and know very well. Also, it depicted a world before my state Assam burst into an insurgency against Indian rule, seeking independence. My childhood was all about gun battles and bomb blasts because I grew up during an armed insurgency. This novel portrayed my homeland before the insurgency, providing a clear picture of what it meant to live peacefully in the sixties and seventies. It is also the first novel I ever read in my life.

Always, chai. With milk, cardamom, and a hint of ginger.

The Book of Night Women by Marlon James. First, it is a riveting work of fiction. It is so damn well written, and I wish I could write like that. Reading the book makes me wonder what the hell I am doing because I can never write at that superior level. But the book is also radical in terms of language. Can we write in an English that defies conventions? Can we write in an English that is derived from the spoken? It questions what kind of language the modern Anglophone publishing industry privileges repeatedly and I find that especially empowering and inspiring. It is also radical for many other reasons, and if I elaborate, it will become a 5000 words essay. So, I will stop. But everyone should read it!

I wish I had read The Old Man and the Sea more diligently. I read it in my teens but didn’t enjoy it. And I didn’t read it for many years but reading it in my twenties was a wonderful experience.

“Definitions have always belonged to the definers.”

The Namesake. Mira Nair managed to transform the novel and make it much more invigorating. Amazing music. Incredible acting by Tabu and Irfan Khan. I have watched the movie many times, but I have read the novel only a couple of times. It is one of those rare instances when you like the movie more than the book.

I love Avid Book Store in Athens, Georgia. They are close to where I live, have a great staff, and hosted one of my readings! How can I not love them?

Many things! I wish I had a mentor. I never had one to tell me, “Aruni, you should do this.” But above all, I wish I had known that success means what it means to me now in the post-2020 world. I think that I am successful as an author, and I feel very fortunate about that. I know I worked and but also lucked out. I do want the big book deal, and I do want to be a bestselling author, and of course, I want to speak to massive crowds in large auditoriums, but I used to think that is the only kind of success, but after 2020, I have realized that success is all about the ability to practice my art with the least hindrance. I am immensely grateful I can do that.

I think the writing gets easier as we write more: it is like Hindustani or Carnatic classical music; the more you write, the easier it becomes. But publishing and marketing are things that are not in our control. If I had an influential literary family, I would open my own press and publish myself. But I have chosen this, so I complain a lot to my friends and still submit and still get upset occasionally with rejections. I don’t get affected by negative reviews because I am an academic and know literary history well and have seen how artistically audacious books are reevaluated after a few years. I hope to continue writing such books.

I have had dogs and cats.

Anywhere with loved ones, but with a thriller and lots of good food.

After it was adapted as a movie, the new paperback edition of Beloved was published I think – the woman with that black gown, the black hat. It is a stunning cover, but I think you can appreciate that cover more if you had already read the novel and have not watched the movie.

“Bimurto Mur Nixati” by Bhupen Hazarika is a song about lovemaking, but it is so suggestive and euphemistic that it can be a song about anything else. I know it by heart.

Writing in Assamese regularly has given me a huge set of readers who have also become friends and part of my life. Some of them have been with me through thick and thin. Sometimes we write serialized novels in Assamese, and my first Assamese novel was serialized in a magazine called Satsori. Once, a reader fell in love with Rajeev, who is also the protagonist of the novel. He comes to Minnesota, studies English, falls in love, and often wonders about his home in Assam. He is critical of US foreign policy (as one should be!), racism (of course!), etc., and airs those views usually in between conversations. This reader fell in love with Rajeev and would share her responses with me often but often thought I am Rajeev: “When you do this in the novel in that episode, I thought.” I would correct her, “No, that’s not me, that’s the character.” But one day, she stopped calling and left a comment on my social media that she doesn’t like Rajeev anymore because he “sleeps around”. “This novel reveals what kind of a character-less person you are,” she said. I have laughed about it for all these years.

My god, the list is so long, but I like Hazaroan Khahishein Aisi. I also love watching commercial Indian movies that don’t make much sense. My favorite movie is Mr. India: about a man who finds a device that makes him invisible when he wears it. He uses this newfound superpower to fight corruption in India.

What is your favorite Austen novel and film adaptation? Why?

I am not an Austen fan, but I enjoyed reading Pride and Prejudice and Emma. I read them because they were was in my English literature course. It was compulsory reading. I have not watched any of the adaptations.

An hour ago! My house is full of books that are waiting to be read. When will I have the time to read them all!

From: Blog
← Drunk on Ink Q & A with Gayatri Sethi and ‘Unbelonging’, a memoir
Drunk On Ink Q and A with Saumya Dave and ‘Well-Behaved Indian Women’, a novel →
One Comment Post a comment