Drunk on Ink Q & A with Yousra Imran and ‘Hijab and Red Lipstick’, a novel 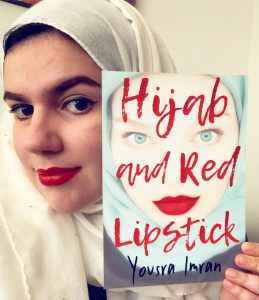 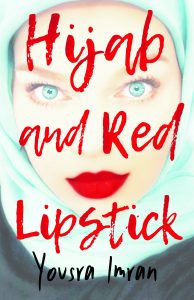 Yousra Imran is a British Egyptian writer and author of YA novel Hijab and Red Lipstick (Hashtag Press). She works full time in marketing and events in the higher education sector, and lives in West Yorkshire. When she isn’t writing and reading, she enjoys long walks, listening to vintage Arabic music and watching movies.

About Hijab and Red Lipstick

Being a teenager isn’t easy. All Sara wants to do is experiment with make-up and hang out with friends. It doesn’t help when you have a super-strict Egyptian dad who tells you that everything is “haram” a.k.a. forbidden. But when her family move to the Arabian Gulf, it feels like every door is being closed on Sara’s future. Can Sara find her voice again? Will she ever be free?

YOUSRA SAMIR: The first author I fell in love with was Jacqueline Wilson, which would come as no surprise as she was every girls’ favorite author during the 1990’s. I used to enjoy seeking out her earlier titles from the 1980’s, which unfortunately are no longer printed. My favorite book of hers from the 1980’s is Waiting for the Sky Fall, firstly, because there is a mixed race girl on the front cover, and secondly it was the first time I had ever read a young adult novel that spoke about doing your O-Levels (GCSEs), relationships, sex and pregnancy so openly.

Karak chai for sure!

I’d like everyone to read It’s Not About the Burqa edited by Mariam Khan. It’s an anthology of essays written by British Muslim women and they are just such a diverse group of women, from different walks of life, different sexual orientations and all doing such different things with their lives. It’s a must-read because not only is this the first time that I’ve seen Muslim women write so openly about sex, queerness, sexual orientation, relationships and issues within society that are traditionally considered “taboo” by Asian and Arab cultures, it’s an anthology that shows readers that Muslim women aren’t a monolith – each one of us is different, and we have such vibrant stories to tell.

I think it was probably Charles Dickens in general – growing up I felt like I should read at least one Dickens book from start to finish, and tried Great Expectations and A Tale of Two Cities and just never got through them!

“The most subversive thing a woman can do is talk about her life as if it really matters.”

I love both The Color Purple watch trailer and Beloved watch trailer and strangely, Oprah Winfrey acted in and produced both of them! I think it was the first time I watched movies that had such strong, black, female leads. I think the other reason I love them is that the stories involve women finding their voice and standing up for themselves.

The Book Case in Hebden Bridge and Bert’s Books (online).

I read some really good advice recently which said “don’t call yourself an aspiring writer. If you write, you are a writer” and I wish I’d owned that sooner.

Hijab and Red Lipstick is my debut novel so I will have to let you know when book number 2 gets eventually published! But in terms of getting this debut published, I won’t lie – it was hard! Literary agencies kept saying on their websites that they were looking for authors from ethnic and under-represented minorities and I’d make a submission and rejections always came back with “your writing is very good” or “there’s nothing wrong with your writing” “but we don’t see a market for your book.” I disagree – there is definitely a market for books with Muslim characters.

Exploring a historic city – I have wanted to go to Cordoba and Istanbul for ages!

I absolutely adore the book cover of The Seven Necessary Sins for Women and Girls by Mona El Tahawy.

Lady (Hear Me Tonight) by Mojo

Not an Austen fan – I know, shocking! I prefer the Bronte sisters and George Eliot. The women in Bronte and Eliots’ novels are far stronger and have more complex personalities.

(SK NOTE HERE- we can debate the stronger and more complex- 🙂

Diary of a Muslim Nobody by Reaz Rahman – I came across it through my publishers, and when I knew Rahman had self-published, I wanted to support a fellow Muslim author