Drunk On Ink Q & A with Nancy Johnson and ‘The Kindest Lie’, a novel 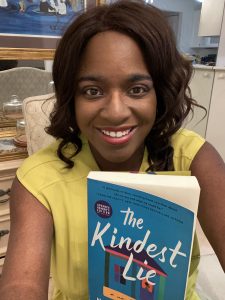 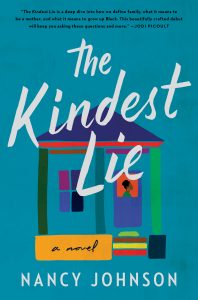 A native of Chicago’s south side, Nancy Johnson writes at the intersection of race and class. Her debut novel, The Kindest Lie (February 2021 William Morrow/HarperCollins) has been featured in Entertainment Weekly and has been named a most anticipated book of the year by Marie Claire, ELLE, The Chicago Tribune, The New York Post, Good Housekeeping, Parade, Popsugar, Refinery29, and more. The book received starred reviews from Publishers Weekly and BookPage, and was selected as Indie Next and LibraryReads picks. It’s also a selection for the Book of the Month Club. Nancy has also written personal essays for Real Simple and O, the Oprah Magazine. A graduate of Northwestern University and The University of North Carolina at Chapel Hill, Nancy lives in downtown Chicago and manages brand communications for a large nonprofit. The Kindest Lie is her first novel.

About The Kindest Lie

The Kindest Lie is the story of an unlikely connection between Ruth Tuttle, an Ivy League-educated Black engineer searching for the son she left behind, and Midnight, a poor, young white boy adrift in a dying Indiana factory town at the dawn of the Obama era. The novel explores family, sacrifice, and the pursuit of the American Dream.

It’s 2008, and the rise of Barack Obama ushers in a new kind of hope. In Chicago, Ruth Tuttle, an Ivy-League educated black engineer, is married to a kind and successful man. He’s eager to start a family, but Ruth is uncertain. She has never gotten over the baby she gave birth to—and abandoned—when she was a teenager. She had promised her family she’d never look back, but Ruth knows that to move forward, she must make peace with the past.

Returning home, Ruth discovers the Indiana factory town of her youth is plagued by unemployment, racism, and despair. While her family is happy to see her, they remind her of the painful sacrifices they made to give her a shot at a better future—like the comfortable middle-class life she now enjoys.

Determined, Ruth begins digging into the past. As she uncovers burning secrets her family desperately wants to hide, she unexpectedly befriends Midnight, a young white boy who is also adrift and looking for connection. When a traumatic incident strains the town’s already searing racial tensions, Ruth and Midnight find themselves on a collision course that could upend both of their lives.

The Kindest Lie examines the heartbreaking divide between black and white communities and plumbs the emotional depths of the struggles faced by ordinary Americans in the wake of the financial crisis. Capturing the profound racial injustices and class inequalities roiling society, Nancy Johnson’s debut novel offers an unflinching view of motherhood in contemporary America and the never-ending quest to achieve the American Dream.

NANCY JOHNSON: Every girl in fourth grade was reading The Triple Hoax by Carolyn Keene. Soon, I devoured it, too, and eventually started at the beginning of the Nancy Drew mystery series with The Secret of the Old Clock. Soon, I had more than 60 of those yellow-spined books. Maybe it was because Nancy was my namesake or perhaps it was my strong desire to be a detective when I grew up. As much as I loved following Nancy in her blue convertible as she careened down the sleepy streets of River Heights solving cases, it didn’t occur to me until I was an adult that there no Black characters in those books. It’s now that I lament not seeing myself reflected on the page during those early, formative years. Now those books are collecting dust in my mother’s garage. She threatens to donate or dump the books, but I can’t part with them.

None of the above. My go-to drink to unwind and feel cozy is hot chocolate from Starbucks: 5 pumps of mocha, no whipped cream.

Everyone should read The Fire Next Time by James Baldwin, which began as a letter from Baldwin to his nephew on the 100-year anniversary of the so-called emancipation of Black folks. That book is a prophetic warning to America about what will happen if it doesn’t do the work to achieve racial justice. I’ll never forget that last line: “God gave Noah the rainbow sign. No more water, the fire next time.”

Yes, Beloved by Toni Morrison. I read it early in my college career at Northwestern University in Professor Leon Forrest’s class. The text seemed incredibly dense and I struggled with the intricacy of the language. When I read it, I was “just calling words” as my late father would say. At that time, I lacked the intellectual maturity to appreciate Morrison’s work. Today, she’s my favorite author and my inspiration as a writer.

Eli (Ruth’s brother) describing his wife’s reaction when he lost his job at the auto plant.

“She took it real good in the beginning, rubbing my face, whispering sweet words in my ear. You know how y’all women do. Talking ‘bout how she loves me more than biscuits and gravy and I would always be her husband no matter what. That’s what she said until the bill collectors started calling. Then I started smelling some other brotha’s sweat on her.”

Alice Walker’s The Color Purple is a masterpiece in literature. Watch trailer here. The story of Celie and Mister and Shug Avery came to life through Steven Spielberg’s interpretation on the big screen. That was one of the few times I thought a movie gave nuance and dimension to the book.

I love Semicolon, the only Black woman-owned bookstore in Chicago!

I wish I’d known that a well-told, compelling story would ultimately find its way to its readers.

Well, The Kindest Lie is my first book, so check in with me sophomore year!

No pets for me. I had a terrifying encounter with a stray dog when I was three-years-old and unfortunately, that experience stuck with me. So, I admire other people’s pets from afar. *laughing*

Oh, too many over the years to name a favorite, but right now I’m digging the covers of The Other Black Girl by Zakiya Dalila Harris and The Lost Apothecary by Sarah Penner.

Too many to pick one. A few of my faves:

“As” by Stevie Wonder

My dear author friend, Julie Carrick Dalton, had a young, African-American artist named Dylan Gabriel hand paint a rendering of my book cover. He’s so talented and I love the piece.

I haven’t been to any literary festivals since publishing my book. However, I have been hearing from readers. One told me that the character of Mama, who is Black, reminded her of her own Belgian and Jewish grandmother who also made hot water cornbread and kept a can of bacon drippings on the back of the stove. It was a great reminder of the universality of story.

After hearing the poet Amanda Gorman’s brilliant, anointed performance at the Inauguration, I was craving more of her work. I pre-ordered the audio version of “The Hill We Climb.” The world needs her voice and her wisdom right now. I sure do.