Drunk on Ink Q & A with Eman Quotah and ‘Bride of the Sea’, a novel 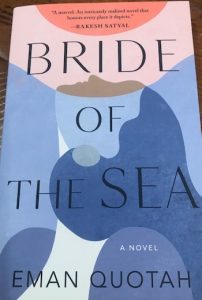 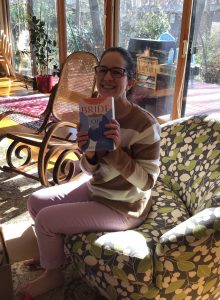 Eman Quotah is the author of the novel Bride of the Sea. She grew up in Jidda, Saudi Arabia, and Cleveland Heights, Ohio. Her writing has appeared in The Washington Post, USA Today, The Toast, The Establishment, Book Riot, Literary Hub, Electric Literature and other publications. She lives with her family near Washington, D.C.

About Bride of the Sea

During a snowy Cleveland February, newlyweds Muneer and Saeedah are starting their lives in America and expecting their first child. But Muneer harbors a secret: the word divorce has begun whispering itself in his ear. Soon, their marriage will end, and Muneer will return to Saudi Arabia, while Saeedah remains in Cleveland with their daughter, Hanadi. The more time she shares with her daughter, the more Saeedah wants to keep her close, and before long, her fear of losing Hanadi leads Saeedah to think that she and her daughter have no choice but to hide. Saeedah disappears with the little girl to build a new, secret life, while Muneer is left desperately searching for his daughter in a different country for years. The repercussions of this abduction ripple outward, not only changing the lives of Hanadi and her parents, but also their interwoven family and friends—those who must choose sides and hide their own deeply guarded secrets. And when Hanadi comes of age, she finds herself at the center of this conflict, torn between the world she grew up in and a family across the ocean. How can she exist between parents, between countries? This question lies at the heart of Eman Quotah’s spellbinding debut about colliding cultures, immigration, religion, and family; an intimate portrait of loss and healing, and, ultimately, a testament to the ways we find ourselves inside love, distance, and heartbreak.

SONIAH KAMAL: First author and book you fell in love with? Why?

EMAN QUOTAH: I don’t know the first for sure, but I was a big fan of Scott O’Dell’s historical fiction for a while, and of Madeleine L’Engle’s books, both the Wrinkle In Time series and the Austin family series. I loved Lloyd Alexander’s Prydain series, Ursula K. Le Guin’s Earthsea books, and the Belgariad books. And Gerald Durrell’s My Family and Other Animals and the books that followed, about his quirky English family living in Corfu and his early love of nature.

Then, eventually my favorite author of childhood became Robin McKinley. I remember seeing The Blue Sword in the library in Cleveland Heights one summer and loving the cover of a veiled character on a horse with a flaming blue sword. I had to read it! The protagonist, Harry, becomes a sword-wielding, magical hero. Even better, she’s mixed-race, like me, something I don’t remember finding in other book characters in those days. It’s exciting that these days, my kids have so many more books about characters that aren’t white — and by authors from many backgrounds — to choose from.

To unwind, chai. To wind up, coffee. No wine. I’m a teetotaler.

Toni Morrison’s Playing in the Dark: Whiteness and the Literary Imagination. Many people don’t think reading literature and understanding it and analyzing it has any bearing on the real world. But read Toni Morrison’s literary criticism, and you will understand a lot more about race in America.

Oh, gosh. I pushed through a lot of classics in grad school, including Clarissa and Wings of the Dove, so I don’t have many regrets about the books I haven’t read. Maybe I wish I could get myself to read The Satanic Verses and others by Rushdie. But not really.

“If anyone aims the sentence ‘You are divorced’ at Saeedah three times, she is not there to hear it.”

Lord of the Rings. Because there is no epic film or film series that can match it, and I feel no need to read the books with the movies in the world.

Nope, but I do think seeing a list of outlets I’ve published in and holding my published novel makes me feel like I’m really a writer. 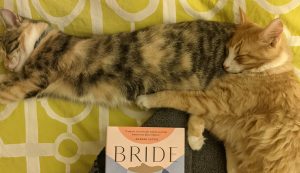 A beach or a city.

I’m a big fan of Arabic and Islamic calligraphy. There are a lot of great artists working in this medium today, and one of them is Shaker Kashgari.

I have only read at one literature festival, pre-book and pre-pandemic. But I’m loving hearing from people who find solace in my book. One woman wrote on Twitter, “Bride of the Sea grapples w. belonging, assimilation, erasure, and Islamophobia. Still, @EQuotah’s words are like hot tea in a snowstorm. The ultimate comfort.” I mean, this is why I write.

I used to go to a lot of movies, but since my kids were born, I don’t as much. So I feel like there’s a decade of films I’ve missed out on. But, I’ll say The Philadelphia Story and the Lord of the Rings trilogy.

I think Pride and Prejudice for the novels — it’s the only one I’ve reread recently. For film adaptations, I like the cheeky modern ones, like Clueless and Bridget Jones’s Diary. How are those two movies more than 20 years old?

Does Tin House count as a small press? I love being on their list. And I’ve enjoyed books from Graywolf Press, Red Hen Press, Catapult and Unnamed Press recently.

Morgan Parker’s poetry collection Magical Negro had been on my “want to read” radar for a while, and when it won the National Book Critics Circle Award for Poetry I decided to grab it. So maybe that was a slow-burning impulse!

Soniah Kamal is an award winning novelist, essayist and public speaker.  Soniah’s novel Unmarriageable is a Financial Times Readers’ Best Book of 2019, a People’s Magazine Pick, a Library Reads Pick, an NPR Code Switch Summer Read Pick, a 2019 Book All Georgians Should Read, a 2020 Georgia Author of the Year for Literary Fiction nominee and more. Soniah’s TEDx talk is about second chances and she has delivered numerous keynotes addreses. ‘We are the Ink’, her address at a U.S. Citizenship Oath Ceremony, talks about immigrants and the real American Dreams, her keynote at the Jane Austen Festival is about universality across time and cultures and she’s given keynotes at Writers Conferences. Soniah’s work has appeared in critically acclaimed anthologies and publications including The New York Times, The Guardian, The Georgia Review, The Bitter Southerner, Catapult, The Normal School, Apartment Therapy and more.  www.soniahkamal.com
She’s on twitter and instagram @soniahkamal

Ilana Masad, All My Mother’s Lovers, a novel

Eman Quotah, Bride of the Sea, a novel

Awais Khan, No Honor, a novel

Aruni Kashyap, There is No Good Time for Bad New, poetry collection