Drunk on Ink Q & A with Awais Khan ‘No Honor’, novel 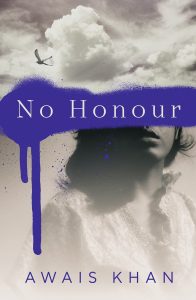 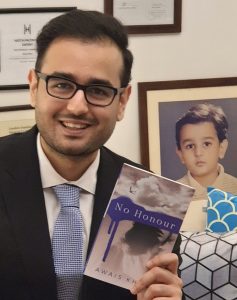 Awais Khan is a graduate of the University of Western Ontario and Durham University. He has studied Creative Writing at the prestigious Faber Academy in London. He is the author of thr critically acclaimed In the Company of Strangers (published by Simon & Schuster, Isis Audio and Book Guild) and No Honour (published by Orenda Books, August 2021). He has given lectures on creative writing at Durham University, American University in Dubai, Canadian University in Dubai etc. His work has appeared in The Aleph Review, The Hindu, Missing Slate etc and he has appeared on several media stations including BBC World Service, Dubai Eye, Voice of America, Cambridge Radio, Samaa TV, PTV Home, City 42, SpiceFM etc. He is represented by Annette Crossland at A for Authors Agency Ltd London.

In sixteen-year-old Abida’s small Pakistani village, there are age-old rules to live by, and her family’s honour to protect. And, yet, her spirit is defiant and she yearns to make a home with the man she loves. When the unthinkable happens, Abida faces the same fate as other young girls who have chosen unacceptable alliances – certain, public death. Fired by a fierce determination to resist everything she knows to be wrong about the society into which she was born, and aided by her devoted father, Jamil, who puts his own life on the line to help her, she escapes to Lahore and then disappears. Jamil goes to Lahore in search of Abida – a city where the prejudices that dominate their village take on a new and horrifying form – and father and daughter are caught in a world from which they may never escape. Moving from the depths of rural Pakistan, riddled with poverty and religious fervour, to the dangerous streets of over-populated Lahore, No Honour is a story of family, of the indomitable spirit of love in its many forms … a story of courage and resilience, when all seems lost, and the inextinguishable fire that lights one young woman’s battle for change.

AWAIS KHAN: The first book I fell in love with was The Railway Children. I think I read one of those abridged Ladybird classics, but there was something about the strength and resilience of those kids that made me read that book again and again. The first author I fell in love with would have to be Enid Blyton. I devoured her books. There are so many, but the Secret Seven series was a particular favorite of mine.

Strangely, caffeine doesn’t really wake me up. That’s why I can drink all the coffee I want and still be able to sleep. In an ideal world, I’d like to unwind with an XL cup of Tim Hortons French Vanilla coffee, but since that’s not available in Pakistan, I settle for a White Chocolate Mocha from Gloria Jeans.

There are so many, but if I were to choose, I’d say ‘A Gentleman in Moscow’ by Amor Towles. It’s fiction, but the protagonist’s force of will to live, to enjoy life even in the worst kind of circumstances imaginable, makes it something everyone should read. It is a book to be savored and cherished.

Ayn Rand’s Atlas Shrugged and the works of Dostoyevsky. I do love Austen and Dickens, but I feel that Russian classics also deserve our attention. I wish someone had told me about books like ‘The Idiot’ and ‘Anna Karenina’ back when I was a teen. Yes, they are a bit depressing, but so is life sometimes.

This is a tough one, but if I had to choose one, it would be

‘That’s the beauty of life. You always have a choice.’

It’s from In the Company of Strangers.

Lord of the Rings (watch trailer). (Book). I think I simply don’t have the words for it. One only has to watch the film series to appreciate the sheer scale of work that has gone into it. Everything from the location to the actors is perfect. I’ve read the series only once, but I’ve watched it for over a dozen times.

I absolutely love my local bookshop, Readings. I don’t know how they do it, but somehow they have all the books I want to read. They import some of the best books from the UK and US and make them available for reasonable prices. They also stock my book, In the Company of Strangers, and have promised to stock No Honour too.

That it’s a lonely job, and that 90% of the time, you have to deal with rejection. After a while, it begins to crush your soul.

I don’t think writing ever becomes easy. Not for me, at least. I really envy the writers that can produce three books a year. For me, it is a mammoth task. Marketing does become easier as with each book you consolidate on your existing following, but I don’t think publishing gets any easier unless you’re James Patterson or J.K. Rowling. My agent had to struggle for No Honour just as hard as she struggled for ITCOS.

I’m not into pets, but if I were to ever keep a pet, I think I’d go with both a cat and dog. They have such different personalities. I love the indifference from a cat and the sheer unfiltered love from a dog.

London! That’s all. I have so many friends there that if it were up to me, I’d be visiting that city ten times a year. I love London!

These days, publishers are coming up with such amazing covers, but if I had to choose, I’d say the covers of The Miniaturist (Jessie Burton) and The Illustrated Child (Polly Crosby) are absolutely stunning!

Anything featuring Juhi Chawla. She is my all time favorite actress! I can listen to her songs on a loop. As far as western songs are concerned, it’s a mixed bag. I don’t listen enough, but I like most of the popular songs.

My cousin, Ujala Khan, is an artist and creates the most beautiful art. She recently gifted me a piece from her collection, and it is just exquisite. Apart from that, I do like Victorian art. 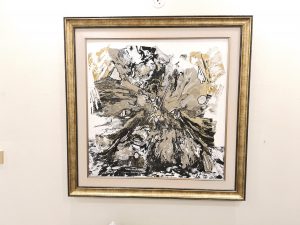 I haven’t been to a lot of literary festivals, but I remember I was at a university for an event (before Covid) and while I was walking back to my car, someone tapped me on the shoulder. I turned and saw that there were almost a dozen young people smiling at me with pens and paper at the ready. They all wanted me autograph. I was shocked! I remember asking them if they had the correct person. They also wanted to take selfies, and I happily posed with them.

There are too many to count, but I absolutely love Lord of the Rings, The Hobbit, Harry Potter, Jurassic Park, 2012 and The Help.

I think Persuasion is my favorite Jane Austen novel. I found it to be very different from Austen’s other novels, more grounded and assured. I really liked BBC’s adaptation of Emma, the one with Ian McKellen. I found it to be such a breath of fresh air. I also liked Bride and Prejudice for its peppy songs.

There are so many small independent publishers out there that are doing an absolutely fabulous job publishing good books. Orenda Books is publishing my next novel, No Honour, and I really like the passion and verve with which Karen Sullivan brings out her books in the world. In addition to that, I also like Red Dog Press, Hera Books and Legend Times, all of which are doing a great job.

My entire life is a series of impulse buys. You do not want to let me loose in a bookshop. You should see the smiles with which the staff at my local bookshops greet me. The last time I was there, I bought Atlas Shrugged and Thorn Birds even though I had perfectly pristine editions of both books sitting at home.

Soniah Kamal is an award winning novelist, essayist and public speaker.  Soniah’s novel Unmarriageable is a Financial Times Readers’ Best Book of 2019, a People’s Magazine Pick, a Library Reads Pick, an NPR Code Switch Summer Read Pick, a 2019 Book All Georgians Should Read, a 2020 Georgia Author of the Year for Literary Fiction nominee and more. Her novel An Isolated Incident was shortlisted for the Townsend Prize for Fiction and the KLF French Fiction Prize. Soniah’s TEDx talk is about second chances and she has delivered numerous keynotes addreses. ‘We are the Ink’, her address at a U.S. Citizenship Oath Ceremony, talks about immigrants and the real American Dreams, her keynote at the Jane Austen Festival is about universality across time and cultures and she’s given keynotes at Writers Conferences. Soniah’s work has appeared in critically acclaimed anthologies and publications including The New York Times, The Guardian, The Georgia Review, The Bitter Southerner, Catapult, The Normal School, Apartment Therapy and more.  www.soniahkamal.com
She’s on twitter and instagram @soniahkamal
More Drunk on Ink Interviews:
Natalie Jenner: The Jane Austen Society, a novel
M.J Irving: Nova’s Quest for The Enchanted Chalice, a novel
Saumya Dave: Well Behaved Indian Women, a novel
Aruni Kashyap: There Is No Good Time For Bad News, poetry
Gayatri Sethi: Unbelonging, a memoir