Drunk on Ink Q & A with Natalie Jenner and ‘The Jane Austen Society’, novel 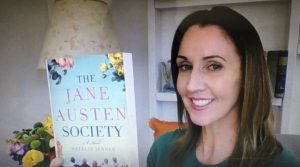 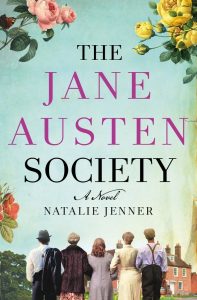 Natalie Jenner is the international bestselling author of THE JANE AUSTEN SOCIETY, a fictional
telling of the start of the society in the 1940s in the village of Chawton, where Austen lived. Born in
England and raised in Canada, Natalie is a former lawyer who was also the founder of Archetype
Books, an independent bookstore in Oakville, Ontario, where she lives with her family and two
rescue dogs. THE JANE AUSTEN SOCIETY is her debut novel and is being published in sixteen
different languages around the world.

About The Jane Austen Society

THE JANE AUSTEN SOCIETY by Natalie Jenner is a fictional tale of the start of the society in the
1940s in the village of Chawton, England, where Austen lived and wrote or revised her six famous
novels. There are eight main characters in the novel, all of whom are obsessed with Austen and
conspire to create the society and turn the Austen cottage into a museum in her honor: a WWII war
widow, a village doctor, a farmer and local handyman, a town solicitor, a house-girl on the Knight
family estate, the anticipated heiress of that estate, an employee of Sothebys, and a Hollywood
actress. Multiple social, romantic, and cultural collisions ensue. Jenner brings all of these disparate
characters vividly to life, and you’ll root for all of them to find their own happiness.

SONIAH KAMAL:  First author/book you read/fell in love with? Why?

NATALIE JENNER: The Canadian author L. M. Montgomery and her Anne of Green Gables series. I loved how spirited,
chatty and imaginative Anne was (in part because, as a child, I too was all those things and a handful
more). I loved the hate-to-romance arc with her schoolroom nemesis Gilbert Blythe. And I loved the
thawing over time of both of her adopted parents, the brother-and-sister Cuthbert team, who
thoroughly captured the older, rural and stoic spirit of their generation. Anne took a really bad situation
in life and found ways to make it magical, and that is such a powerful message for children as we grow
up and realize that the world can be a very difficult and complicated place.

Wine. But my morning latte is my greatest joy.

I love Good Bones by Maggie Smith. It always gives me not only a feeling of being less alone with my
concerns, but also of hope, in equal measure. This, to my mind, is the best type of art.

Until my 40s, I think I compulsively finished almost every book I ever started to read, including the
classics (I am much more ruthless now in middle age with my reading time!). But classics I missed along
the way, and wish I hadn’t, include War and Peace and Moby Dick, both of which I hope to read this
winter.

I have to paraphrase this one:

“Sometimes hope is all we have. But hope can also sometimes be just
enough.”

Ang Lee’s Sense and Sensibility-watch. I love that it’s an Austen adaptation, and that although Emma Thompson
only incorporated a few dozen lines of dialogue from the book into her Academy Award-winning
screenplay, she still managed to capture the essence of the story and the characters. But more than
that, I just love it as a film that stands on its own. The humour, the pathos, the angst written all over
Alan Rickman’s face, the dogs scuttering everywhere, the gorgeous locations, the sumptuous picnics, the
evocative music: this movie has it all.

As a former indie bookshop owner myself, I have too many to name! But if pushed, I aspire for any
bookshop to be as good as the following: Toppings Bookshop in Bath; Village Books in Dulwich, London;
Hatchards in London; Shakespeare and Company in Paris; Blue Heron Books, A Different Drummer and
Ben McNally Books in Ontario; and The Bookstore in Lenox, Massachusetts;

That so much of it happens when it happens, and how little of it is in your control except for the writing
itself, and so just to keep writing, learning and enjoying along the way.

I think different things become harder than before and others get easier. The more often that you write
and complete a long-form story, the more you develop an intuitive radar for what makes a story work,
and so in that way the act of writing does become easier. Publishing, including the marketing of books, is
in a state of disruption like so many other industries, and I think I strangely benefitted from entering the
profession in middle age and at this particular time: I have little to compare any of the current
uncertainty and disruptions to, and even fewer expectations, which helps me stay focused on the craft. 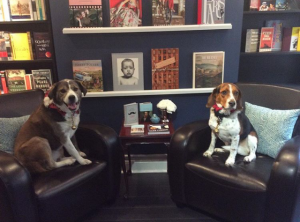 Henry James the Beagle and Molly the Akita

A villa in the heart of Chianti, Tuscany: the most beautiful place in the world.

My own. Hands down. It’s a totally emotional response that there’s no getting around. But I also really
love the cover of the 1936 first edition of Summer Will Show by Sylvia Townsend Warner. It’s a
wraparound design by M. T. Ritchie who did other covers for The Hogarth Press run by Virginia and
Leonard Woolf. Ritchie’s illustration shows two women peering out a window in two different
directions, and both the perspective and the edgy, almost cubist, lines elevate the entire object for me
as a book.

I love music and film as much as books, so this is tough—but one song that I have loved all my life, and
have no idea why, is My Funny Valentine by Rodgers and Hart. I walked down the aisle to the second
movement of the Harpsichord Concerto in F Minor by Bach, perhaps my favourite classical composer. I
also really love I Can’t Tell You Why by the Eagles. Huge Eagles fan here. And Rock the Casbah by the
Clash, Wonderwall by Oasis, and Roxanne by the Police. I am dating myself here!

I love the large-scale Water Lilies panels by Monet that are on display at the Musee de l’Orangerie in
Paris. I love how expansive they are, making you feel like you could step right into them and be on your
way, and how there are no edges or perimeters at all: just this wondrous sense of beauty and infinite
time and space. Monet gifted these large-scale paintings to the nation of France the day after the
armistice of November 11, 1918, as a symbol for peace, and the fact that they continue to exist and
move people like me one hundred years later speaks to the power of that as much as anything.

Unfortunately, my debut novel released in May during the initial height of the pandemic, leading to the
cancellation of all my in-person events. Yet I doubt anything can top the emails from complete strangers
telling me how much my book helped them through a difficult time in life. Nothing, I swear, will ever be
more rewarding than that.

In addition to Ang Lee’s Sense and Sensibility, I also adore the 1995 Persuasion. Although much grittier
and realistic in tone, it too captures so much of the essence of the book: Anne’s inner struggle to be true
to her needs, the abomination that is her immediate family, the respect and joy that her friendships
yield, and the lure of the sea and second chances. When Captain Wentworth takes her small hand in his
large gloved one and leads her down the empty Bath street in the wake of the travelling carnival, I am a
puddle every time.

There is an amazing bookshop in London, England, called The Second Shelf which puts out a semi-annual
magazine featuring some of the collectable editions by women authors that it carries. The beautiful
photos are accompanied by text written by amazing modern authors like Lauren Groff and Daisy
Johnson. It’s gorgeously made and designed, and I am a little obsessed with it.

A first-edition signed copy of August Is a Wicked Month by Edna O’Brien, purchased from The Second
Shelf for my daughter’s nineteenth birthday. Late teens is the perfect age to be introduced to O’Brien,
and one of the great joys and privileges of my life is sharing my love of stories, and books as valuable
objects, with my daughter in this way.

Soniah Kamal is an award winning novelist, essayist and public speaker.  Soniah’s novel Unmarriageable is a Financial Times Readers’ Best Book of 2019, a People’s Magazine Pick, a Library Reads Pick, an NPR Code Switch Summer Read Pick, a 2019 Book All Georgians Should Read, a 2020 Georgia Author of the Year for Literary Fiction nominee and more. Her novel An Isolated Incident was shortlisted for the Townsend Prize for Fiction and the KLF French Fiction Prize. Soniah’s TEDx talk is about second chances and she has delivered numerous keynotes addreses. ‘We are the Ink’, her address at a U.S. Citizenship Oath Ceremony, talks about immigrants and the real American Dreams, her keynote at the Jane Austen Festival is about universality across time and cultures and she’s given keynotes at Writers Conferences. Soniah’s work has appeared in critically acclaimed anthologies and publications including The New York Times, The Guardian, The Georgia Review, The Bitter Southerner, Catapult, The Normal School, Apartment Therapy and more.  www.soniahkamal.com
She’s on twitter and instagram @soniahkamal
More Drunk on Ink Interviews:
Gayatri Sethi: Unbelonging, a memoir