Drunk On Ink Q & A with Veena Rao and ‘Purple Lotus’, a novel 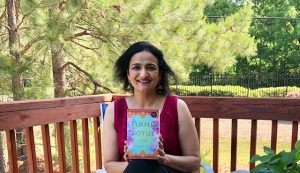 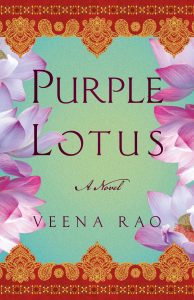 Veena Rao is the founder, publisher and editor-in-chief of NRI Pulse, an Atlanta based Indian-American newspaper. She has been recognized by the Limca Book of Records as the first Indian woman to edit and publish a newspaper outside India. Purple Lotus, her debut novel, is the winner of the She Writes Press and SparkPress Toward Equality in Publishing (STEP) contest, and is scheduled for a September 29, 2020 release.

Tara moves to the American South three years after her arranged marriage to tech executive Sanjay. Ignored and lonely, Tara finds herself regressing back to childhood memories that have scarred her for life. When she was eight, her parents moved to Dubai to make a new life for the family, taking her baby brother along with them—but leaving Tara behind in Mangalore with her aging grandparents and a schizophrenic uncle. Tara’s memories of abandonment and isolation mirror her present life of loneliness and escalating abuse at the hands of her husband. She accepts the help of kind-hearted American strangers to fight Sanjay, only to be pressured by her patriarchal family to make peace with her circumstances. Then, in a moment of truth, she discovers the importance of self-worth—a revelation that gives her the courage to break free, gently rebuild her life, and even risk being shunned by her community when she marries her childhood love, Cyrus Saldanha.
Life with Cyrus is beautiful, until old fears come knocking. Ultimately, Tara must face these fears to save her relationship with Cyrus—and to confront the victim-shaming society she was raised within. Intimate and deeply moving, Purple Lotus is the story of one woman’s ascension from the dark depths of desolation toward the light of freedom.

VEENA RAO: Agatha Christie kept me up all night in high school. I loved Poirot and had fun trying to beat him at his deduction game. I will always love Christie for her ingenious plots, and for adding to much joy to my growing up years.

Chai in the morning, green chai in the afternoon and plenty of water to keep me hydrated through the rest of the day. (no ice for me, thank you).

A novel, short story, poem, essay, anything you believe should be mandatory reading? Why?
Khaled Hosseini’s A Thousand Splendid Suns, a poignant, powerful story told through the voices of women caught between the ravages of war and an abusive marriage. There’s so much to learn from this book about the futility of war, and that countries are made up of men and women who deserve peace as much as we do; that women endure so much more in patriarchal cultures.

Leo Tolstoy’s Anna Karenina. I read large parts of it when I was 16. Hope to read it again some day soon. My Tara (the protagonist of Purple Lotus) has read it. I must, too!

“The names they have for me are not the names I give myself.”

3 Idiots (watch trailer) based on Chetan Bhagat’s Five Point Someone— that rare instance where the movie was way better than the book.

Eagle Eye Books in Decatur. My son practically grew up there, and I, with him. ?

When I was twelve, I decided I would one day write a book and make it big. I had no idea what a long and challenging journey it would be! It took me ten years to write and find a publisher for Purple Lotus.

I sure hope it does! My next novel is waiting to burst out of my head.

Any vacation would be ideal in the current times ?

The cover of Purple Lotus, designed by the super talented Brigid Pearson.

It’s hard to pick one favorite when you’ve grown up with Hindi film songs. I can listen to the R.D. Burman/Kishore Kumar magic from the 70s all day. Also, Andy Williams’ version of Moon River is such a soulful, timeless classic. Oh, and Michael Jackson’s Thriller album.

A dear friend, who’s now a well-known Atlanta area artist, gifted me one of her original works during a particularly rough phase in my life. The cheerful painting, of a kitchen window with bright red and yellow valance, brought so much sunshine into my life when I needed it the most. It will forever remain my most favorite work of art. 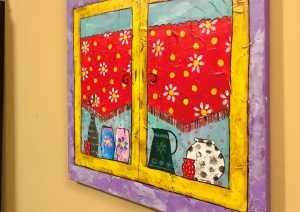 I haven’t been to a lit festival as an author yet, thanks to covid.

Unmarriageable by Soniah Kamal transports Jane Austen’s timeless characters to a South Asian culture and a modern time. What’s not to love?

My awesome publisher, She Writes Press, is at the forefront of addressing the publishing industry’s whiteness problem. They have been incredibly supportive of my publishing goals.

I’m constantly buying books written by South Asian-American authors. I ordered Shabnam Samuel’s, A Fractured Life, recently after Amazon recommended it to me. I was interested because the memoir is partly set in Cuttack, where I spent the first six years of my life. I finished this deeply moving story of abandonment, sadness, courage and hope in a couple of sittings. If you like memoirs, I highly recommend this book.

Soniah Kamal is an award winning novelist, essayist and public speaker.  Soniah’s novel Unmarriageable is a Financial Times Readers’ Best Book of 2019, a People’s Magazine Pick, a Library Reads Pick, an NPR Code Switch Summer Read Pick, a 2019 Book All Georgians Should Read, a 2020 Georgia Author of the Year for Literary Fiction nominee and more. Her novel An Isolated Incident was shortlisted for the Townsend Prize for Fiction and the KLF French Fiction Prize. Soniah’s TEDx talk is about second chances and she has delivered numerous keynotes addresses. ‘We are the Ink’, her address at a U.S. Citizenship Oath Ceremony, talks about immigrants and the real American Dreams, her keynote at the Jane Austen Festival is about universality across time and cultures and she’s given keynotes at Writers Conferences. Soniah’s work has appeared in critically acclaimed anthologies and publications including The New York Times, The Guardian, The Georgia Review, The Bitter Southerner, Catapult, The Normal School, Apartment Therapy and more.  www.soniahkamal.com
She’s on twitter and instagram @soniahkamal