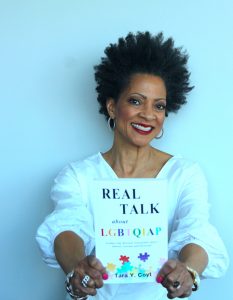 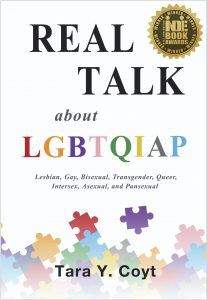 Tara Coyt is an award-winning marketing and advertising professional, author, speaker, photographer, and painter. Her book Real Talk About LGBTQIAP won a New Generation Indie Book award and was nominated for the Georgia Author of the Year Award. Tara has also developed books for two NBA All-Stars, a Death Row Records photographer, and several entrepreneurs. She is also the founder of Coyt Communications and Get it Write, a coaching program for aspiring authors. Following her mother and grandmother’s examples, Tara has been active in community and  non-profit organizations since childhood. Board include appointments include the Atlanta-Rio Sister Cities Foundation, Atlanta Technical College Foundation, and Atlanta Writers Club. Tara has been a member of the Black Journalists Association, and National Association of Minorities in Communications, and is a graduate of the United Way of Metropolitan Atlanta VIP. She is an ally for LGBTQ equality, a GLAAD Media Institute alumnus, and has participated in Georgia Equality’s speaker training program. Tara Coyt and her twin brother were born in Cleveland, OH. She earned a BS, Natural Sciences from Xavier University (OH) and an MBA, Marketing from The Ohio State University. Tara resides in Atlanta, GA.

TARA COYT: I’ve been a voracious reader since childhood, and when I ran out of library books and my parents’ books I resorted to the Encyclopedia Britannica. The first book that rooted itself in my soul and never left was Toni Morrison’s The Bluest Eye. It is one of the most painfully beautiful books ever written. Around the same time I read The Autobiography of Malcolm X: As Told to Alex Haley, which convinced me that I could not stop speaking, writing, and acting on behalf of equality.

Reading the newspaper should be mandatory. My brother and I grew up sitting at the kitchen counter reading the newspaper with my parents. I began with the comics, then added Arts & Entertainment, the front page, sports, and finally business. Newspapers entertain, inform, and expand our horizons. They can also spark conversations.

None come to mind.

There are so many memorable quotes in Real Talk, from every person I interviewed and few from myself. I also added quotes from Zen proverbs, greeting cards from my mother, activists, and celebrities like Lena Waithe and David Letterman. I’ll share the closing quote, which describes what I believe is my calling. It’s from The Goddess Tara, According to the Legends of Tibet: “Therefore, may I, in a female body, work for the welfare of all beings, until such time as all humanity has found its fullness.”

Malcolm X. There we encounter Denzel Washington and Spike Lee at their best. The film was beautiful, emotional, dramatic, and inspirational.

(read the Drunk On Ink Interview  with Charis Books Here)

That there’d be some days I wouldn’t want to do this thing I love. Those days appear just before I’m about to reach a breakthrough, and knowing that pushes me forward.

Some aspects become easier because, as with most things, there’s a learning curve. Then once I feel I’ve mastered something I discover another area that needs improvement.

Dog. My first dog was Bunny, a black Scottish Terrier my parents bought when my twin brother and I were 6 months old. Dogs require a lot of attention, and the reward is that they offer tons of attention in return.

Visiting at least 2 cities or countries I’ve never been, with the love of my life. No crowds, warm weather, cultural activities, historic sites, delicious food, and a rental house or condo are preferred.

Aside from Real Talk nothing comes to mind. It’s interesting that I don’t pay a lot of attention to covers, even though I’m also a visual artist.

There is too much music in the world to ever select one song as my favorite. How do you do that when there’s Fela Kuti’s “No Water No Enemy,” “Move Your Body” by Marshall Jefferson, “Valeu” by Tania Maria, “Europa” by Gato Barbieri, and artists like Tony Bennett, Karen Carpenter, Charles Mingus, Franky Beverly & Maze, Angela Bofill, Arturo Sandoval, Aretha Franklin, Michael Franks, James Brown, Janis Joplin, Bob Marley, Sarah Vaughan, The Roots, Grace Jones, Sly & The family Stone, Fiona Apple, Bruce Springsteen, Diana Krall, Yo-Yo Ma

I like works by Romare Bearden, Elizabeth Catlett, Paul Cezanne, Diego Rivera, and Joe Barry Carroll, and have recently added myself to that list.

I always arrive early to set up the room and collect myself. Upon arriving at the Decatur Book Festival the room didn’t have what was requested so and I began working with the room monitor and others to get what was needed. I was so focused on getting the stage set that I never looked behind me until about 20 minutes later when my partner stopped me and said, “Turn around.” The room was full. The faces that stared at me ranged from children to seniors, and people of different races, sexualities, gender identities. You never know who’s going to show up to an event or if anyone will show up. Seeing a standing-room-only crowd brought me to tears.

I’m proud to be a part of Joe Barry Carroll Publishing, which focuses on presenting uplifting and impactful stories of our shared human experience.

“Caste” by Isabel Wilkerson. I love reading about history and her first book, “The Warmth of other Sons” was presented in such an engaging way that prompted me to buy Caste without even reading an excerpt.