Drunk on Ink Q & A with Zetta Elliott and ‘A Place Inside of Me’, middle grade lit 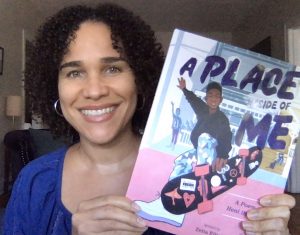 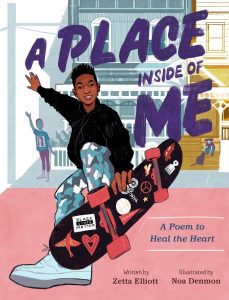 Born in Canada, Zetta Elliott moved to the US in 1994 to pursue her PhD in American Studies at NYU. Her poetry has been published in several anthologies, including We Rise, We Resist, We Raise Our Voices and New Daughters of Africa; her first young adult poetry collection, Say Her Name, was published by Little, Brown in 2020. Elliott is an advocate for greater diversity and equity in children’s literature; her essays on race and publishing have appeared in The Huffington Post, School Library Journal, and Publishers Weekly. She is the author of over thirty books for young readers, including the award-winning picture book Bird and the critically acclaimed middle grade novel Dragons in a Bag. Her plays have been staged in Cleveland, New York, and Chicago. She lives in Evanston, IL. Learn more at zettaelliott.com.

About A Place Inside of Me

In this powerful, affirming poem by award-winning author Zetta Elliott, a Black child explores his shifting emotions throughout the year.
Summertime is filled with joy—skateboarding and playing basketball—until his community is deeply wounded by a police shooting. As fall turns to winter and then spring, fear grows into anger, then pride and peace. In her stunning debut, illustrator Noa Denmon articulates the depth and nuances of a child’s experiences following a police shooting—through grief and protests, healing and community—with washes of color as vibrant as his words. Here is a groundbreaking narrative that can help all readers—children and adults alike—talk about the feelings hiding deep inside each of us.

ZETTA ELLIOTT: I feel like I’ve had multiple lives as a reader. When I was a child, I had a crush on Frances Hodgson Burnett; as a teen it was Dickens. Then I was introduced to Jamaica Kincaid in a politics and literature class at college and I also read Toni Morrison for the first time that semester. Those two books (Lucy and Beloved) changed the course of my life. They helped me begin the process of decolonizing my imagination by de-centering Whiteness. I left Canada, moved to NYC, and started graduate school in a program at NYU where I had—for the first time—majority Black professors and Black peers. I began studying Black literature and was able to situate my own writing within a much longer, larger storytelling tradition.

After a really hard day, a milkshake! Otherwise, tea.

Everyone should read June Jordan’s “The Difficult Miracle of Black Poetry in America: Something like a sonnet for Phillis Wheatley.” I give a lot of talks and have written too many essays on the racial disparities in US publishing; this essay gets to the root of the problem and explains why it’s still so hard for Black women to get published in this country.

Ha—as a teen I always finished what I started. As an adult…not so much. I was a teaching assistant for a course in Early American Literature at NYC in 2000 and managed to teach—without ever finishing—Moby Dick. Ugh.

“I know how long and hard we have struggled / & against all odds my people have emerged / strong /triumphant & beautiful.”

I flounder whenever I see the word “favorite” in a question! Menopause brain makes it hard to pull up titles from the past fifty years, but a film that stayed with me was the 2015 adaptation of Thomas Hardy’s Far from the Madding Crowd with Carey Mulligan and Matthias Schoenaerts (watch trailer here). The casting and performances were excellent and it didn’t follow the standard coupling convention.

I only lived in Philly for a year, but Uncle Bobbie’s was a great place to meet friends and attend events. Harriett’s Bookshop opened just as I was leaving but I really admire the activism of owner Jeannine A. Cook.

That it’s not a meritocracy. It takes a lot more than talent to get ahead, so you need to have your own definition of success and be very clear about why you write and for whom.

No! Because it’s not a meritocracy. So even when you win awards or have a commercially successful novel, as a Black woman you’re still operating within a system that was never designed to serve you or your community. You can follow the rules and still not get ahead or earn as much as other writers (see #publishingpaidme). And if you try to operate outside of that system by self-publishing, you’ll be penalized—bookstores won’t carry those titles, review outlets ignore indie books or else charge high fees for a review, libraries won’t acquire titles that haven’t been reviewed…either way, it’s a hustle. I’m fighting right now to get a fair deal from my publisher. AND I’m self-publishing my third book of the year. And I’ve got close to twenty unpublished manuscripts sitting on my hard drive. The writing does get easier because once you’ve written three, or thirteen, or thirty books, you trust yourself to finish.

I grew up with cats so I’m definitely a cat person. I was attacked by a dog as a kid, so I was afraid of them for a long time. Then, to write my first novel, I moved in with my sister and she had a black lab crossed with a pitt bull. Raf terrified the neighbors but he was actually a really sweet dog and he loved having me around all day. I’m still a cat person but I understand the appeal of dogs.

Somewhere unpretentious where I don’t have to dress up or worry about how I look. Where I have the option of being around people or being by myself. I’m not a tropical girl so no extreme heat or humidity. I love to walk so a walkable city or a place with paths through forests or fields.

NK Jemisin is one of my favorite authors and Subterranean Press commissioned a special edition of How Long ’Til Black Future Month illustrated by Paul Lewin.

I listen to a lot of different kinds of music. I found out about Cécile McLorin Salvant this summer and love her voice. I haven’t heard every one of her songs but her rendition of the folk ballad “Omie Wise” is remarkable.

There’s too much art I haven’t yet seen for me to name a favorite, but when I saw the work of Dutch photographer Jenny Boot, I had to have it. I have a print by Mickalene Thomas and I love her work, but I bought Ruler by Jenny Boot two years ago and it was worth every penny!

I did a panel with other Black women writers at NCTE last year and at the end, we had a book swap. Everyone attending and presenting brought a book to trade with someone else, and a Chicago teacher, Kimiko Pettis, came up and gave me Eve Ewing’s new book of poetry 1919. It’s got this gorgeous blue cover and my mouth just fell open when she offered it to me. It’s a book I wouldn’t have given away!

I like Emma but best adaptation goes to Persuasion with Ciarán Hinds and Amanda Root (trailer) All the actors were mature adults who looked their age and Amanda Root perfectly played an unmarried woman “past her prime” who’s used to being overlooked.

I have two brilliant writer friends (Rosamond S. King and Gabrielle Civil) who worked for years to get book deals. They both found a home at small presses: Nightboat Books and Civil Coping Mechanisms.

.Last impulse book buy and why?

The Collected Poetry of Nikki Giovanni. I was lucky enough to get permission to include one of her early poems in my first book of poetry, Say Her Name, and it occurred to me that I hadn’t moved beyond “For Saundra” from ’68. I’m getting ready to publish my second collection of poetry, American Phoenix, and I’m making a concerted effort to read—and buy—more books of poetry.