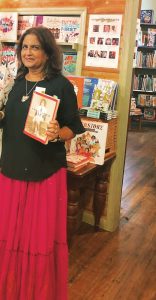 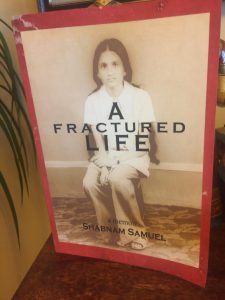 Shabnam Samuel is a writer, coach, social media trainer, and the founder of the Panchgani Writers’ Retreat, an international writing retreat based out of Panchgani, India. The retreat incorporates mindful living along with creativity and wellness following Ayurveda principles, with yoga, meditation and writing workshops. As a writer, Shabnam has been writing ever since she can remember. Her essays have been published online in Brain Child Magazine and Your Tango.  Shabnam also hosts a local TV show called Dew Drops and Words that broadcasts to 2.4 million viewers on the MHz network in the Washington, DC area. You can find her on YouTube under the name ‘Dew Drops and Words’. Shabnam is also a business coach and she mentors with the Empowered Women International in Alexandria, Virginia, an organization that helps train low-income, immigrant, and refugee women on how to be a successful entrepreneurs.

About A Fractured Life.

Abandoned by her parents as a three-year-old, and ultimately leaving her home country India for a new life in America as a young mother of a three-year-old son, this is not only an immigrant’s story, but a poignant and powerful memoir that is at first, one of sadness and continuing adversity, but ultimately one of strength, purpose, and the universal triumph of hope. It is a story of dislocation, disruption, and despair, and brings focus to the silencing of girlhood and womanhood and how with time, love, and support we can work our way out of that silence.Raised by an orphan of the Russian Revolution and an Indian Sepoy who, during WWI was stationed in Iraq (Mesopotamia), her story arc begins in a small town called Cuttack in the East of India and takes her to the capital of the most powerful nation in the world, Washington DC. It is a humanizing story of mixed races, religion, and continents. Shabnam Samuel was twenty seven when she moved to the US, carrying with her a troubled marriage, an almost estranged husband, and a three-year-old son. Hoping to create a fresh start from everything that was holding her down, it took Shabnam twenty-five years of trials and tribulations to finally find her voice, her strength, and her place in this world.

SHABNAM SAMUEL: The first author I fell in love with was Enid Blyton. The families that she created with the Famous Five, were families that I longed to belong to. They had everything, that I did not have.

Okay, don’t laugh, Archie and Jughead comics!!  In your youth to show you that life should be one where you can laugh and as an adult to tell you not to take life too seriously.

Anne Lamott. I am not sure which of her books this is from. I want to say Bird by Bird, but I could be wrong.

The Godfather. Everything was so brilliantly portrayed. The voice, the intonations, the accent, just about everything.

That once you write a book (non-fiction) you are supposed to keep writing essays that revolve around your theme.

I am not so sure. This is my first book.

Sea, sun and my ideal partner.

Can I say mine?

As of now a Bollywood song called Hawayein from the movie  Jab Harry Met Sejal.

My son’s drawing  of a lion and a poem he wrote to go with it when he was 9.

I was at the Bangalore Literature Festival in October and the women and girls who came up to tell me, how my book inspired them to write their own stories.

Sense and Sensibility. I loved the costumes, the drama, the humor the bonnets!!

Green Writers Press out of Vermont.

You know, I actually never buy books impulsively. I buy a lot of them but each one is carefully considered. I read mostly memoirs, but will buy all friends books that I am connected to.