Drunk on Ink Q & A with Emily Midorikawa and ‘A Secret Sisterhood: The literary friendships of Jane Austen, Charlotte Bronte, George Eliot, and Virginia Woolf’ 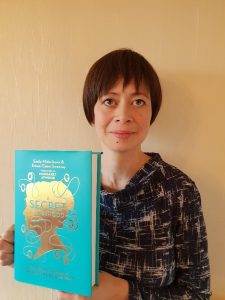 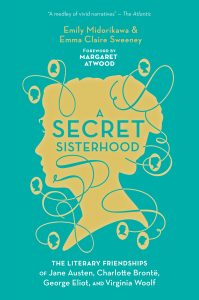 Emily Midorikawa is the author of A Secret Sisterhood: The literary friendships of Jane Austen, Charlotte Bront?, George Eliot, and Virginia Woolf, co-written with Emma Claire Sweeney and with a foreword by Margaret Atwood. Emma and Emily also run the website Something Rhymed, which celebrates female literary friendship. Emily is a winner of the Lucy Cavendish Fiction Prize. Her journalism has appeared in, among others, the Daily Telegraph, the Paris Review, The Times and the Washington Post.

About A Secret Sisterhood

EMILY MIDORIKAWA: As a child, I loved Enid Blyton’s mystery stories and also her school stories, especially the Malory Towers series. I was a big fan of Judy Blume too.

I love a cup of tea or a glass of red wine.

Anything by Jean Rhys is worth reading. I read After Leaving Mr Mackenzie when I was a teenager and it completely blew me away. Her writing made me feel that (in skilled hands like Rhys’s) there were no limits to what language could do).

I’ve somehow never got round to reading War and Peace.

I love Harriet Beecher Stowe’s comment in a letter to George Eliot that book-writing, from an author’s perspective, resembles ‘a hand stretched forth in the dark passage of life to see if there is another hand to meet it’.

Peter Weir’s 1975 film of Joan Lindsay’s novel Picnic at Hanging Rock is immensely atmospheric and stays true to the atmosphere of the novel. I love re-watching it. I think Quentin Tarantino’s Jackie Brown, adapted from Elmore Leonard’s Rum Punch, is great too.

This is really tough, since I have quite a few favorites, but perhaps it’s Persephone Books in London – home of the publisher of the same name. They publish works by neglected, mostly female authors from the mid-twentieth century, and their small shop is a lovely place to discover forgotten literary treasures.

It’s easier with good friends. As a child, I bought into the well-worn stereotype of the isolated writer – someone shut away in a garret with only their words for company! As such, I imagined writing would be a very solitary profession. Of course, the nature of authoring a book means that you are bound to spend many hours cooped up on your own, but my interest in writing has also led me to make many wonderful fellow-writer friends. I’m lucky to have met my Secret Sisterhood co-author Emma very early on in our careers, and so I’ve had her at my side right from the beginning. We give each other writerly advice, swap early drafts of stories, celebrate the good times together and help to pick the other one up whenever the going gets tough.

In a way it does. You at least have the knowledge that you have done this before. You know that you can finish writing a book or a story. Regarding the publicity side of things, you’re also able to learn from past successes and misfires, in terms of what has worked or not worked in the past. On the other hand, each new project brings its own challenges. In many ways, it was a joy to work with Emma on A Secret Sisterhood, but when you have two authors – both with strong opinions – working on a single book this means that you are going to spend a lot of time debating the fine detail. This could occasionally get frustrating, but in the end we realized that, by arguing things out between us at a desk, we had taken our manuscript through a really rigorous drafting process even before we showed the final draft to our editors.

I have no pets.

My mother was Japanese and I lived in Japan for a couple of years when I was in my early twenties, so I always love revisiting Japan – both the nostalgia of returning to old haunts and the excitement of discovering new places.

I feel very lucky that the cover designer for A Secret Sisterhood did an excellent job of conveying what lay inside. Aside from this one, though – which of course holds a special place in my heart – I really like the beautiful yet chilling design for The Wicked Cometh by Laura Carlin.

Again, it’s very hard to pick just one, but ‘Think’ by Aretha Franklin would be right up there.

Back in the autumn of 2017, Emma and I were delighted to give the keynote speech at the George Eliot Fellowship’s 46th Annual Lecture. Among the audience members was a sixth-form student, Jess Molyneux, who had travelled some distance to be there. We enjoyed talking with Jess and were so happy when she got in touch many months later to ask if we would be interested in featuring a post by her – on the literary friendship between Charlotte Mew and  May Sinclair – on our blog Something Rhymed. It’s always nice to meet readers at festivals, and especially when that meeting turns out to be just the start of a connection that stretches into the future.

Sense and Sensibility – the Ang Lee picture starring Emma Thompson and Kate Winslet – is full of warmth and humour. I first saw it at the cinema when it came out in the mid-nineties and I feel that it has stood the test of time.

The Good Journal – a new British magazine featuring the work of UK writers of color.

A writer I follow on Instagram posted an image of Did She Kill Him?: A Victorian tale of deception, adultery and arsenic by Kate Colquhoun. I was instantly intrigued by the sound of this Victorian true crime and ordered it right away.