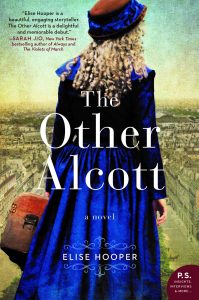 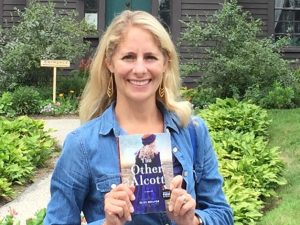 Elise Hooper lives with her husband and two young daughters in Seattle, where she writes and teaches literature and history. The Other Alcott is her first novel. Learning to See will be releasing January 29, 2018.

About The Other Alcott

Elise Hooper’s debut novel conjures the fascinating, untold story of May Alcott—Louisa’s youngest sister and an artist in her own right. We all know the story of the March sisters, heroines of Louisa May Alcott’s Little Women. But while everyone cheers on Jo March, based on Louisa herself, Amy March is often the least favorite sister. Now, it’s time to learn the truth about the real “Amy”, Louisa’s sister, May.  Stylish, outgoing, creative, May Alcott grows up longing to experience the wide world beyond Concord, Massachusetts. While her sister Louisa crafts stories, May herself is a talented and dedicated artist, taking lessons in Boston, turning down a marriage proposal from a well-off suitor, and facing scorn for entering what is very much a man’s profession.  Life for the Alcott family has never been easy, so when Louisa’s Little Women is published, its success eases the financial burdens they’d faced for so many years. Everyone agrees the novel is charming, but May is struck to the core by the portrayal of selfish, spoiled “Amy March.” Is this what her beloved sister really thinks of her?So May embarks on a quest to discover her own true identity, as an artist and a woman. From Boston to Rome, London, and Paris, this brave, talented, and determined woman forges an amazing life of her own, making her so much more than merely “The Other Alcott.”

ELISE HOOPER: I’ve loved books for as long as I can remember, but I didn’t think much about the authors behind them until I was about nine or ten and visited Louisa May Alcott’s Orchard House in Concord, MA. It sounds silly, but it wasn’t until I traipsed through her little bedroom and saw the desk at which she wrote Little Women that I realized that actual people wrote books and maybe I could write them too.

Depending on the time of day, I’m happy to unwind with an iced tea or cocktail.

Oh boy, how about the Constitution?

This is an unpopular opinion, but I’m not a huge fan of Wuthering Heights. I’ve tried several times and just can’t slog through it.

“I long to turn back the clock and mend the rift between us, though now that I think on it, if I could go back in time when would I go back to? When was our relationship ever simple?”

It’s been a long time since I’ve seen it, but I remember thinking that The Joy Luck Club adapted surprisingly well to the big screen.

I have so many favorites! My daughter’s swim team practice is close to Island Books (Mercer Island, WA) so this is the independent bookstore that I visit the most. The staff is awesome and they always offer great book recommendations.

I held off on trying to write a book telling myself I needed to wait until life settled down and my kids got older. Well, it took a while, but finally I realized that life doesn’t settle down one bit as kids get older, it just changes. So I just dove in and started working and have been surprised by the delight I’ve taken in writing as my girls have developed as readers and writers. My daughters have seen my books take shape and I love that there’s no mystery about the creative process for them. They understand that if you want to produce something, you have to sit down and work on it for a long time. Creative work doesn’t just appear in a poof of special magic sparkle dust. It comes from hard work and a whole lot of elbow grease.

I’m not sure yet because I only have one book out, but I can let you know after Learning to See is released (January 29, 2018).

Dogs all the way. 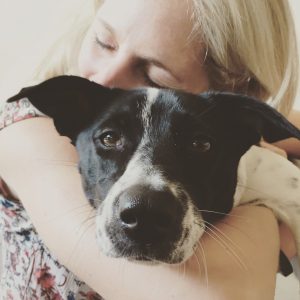 This is a tough one! I just got up and scanned my bookshelves. Stolen Beauty by Laurie Lico Albanese is gorgeous. All of that gold? Mmmm.

We’re still gaga for Hamilton at my house. I’m still trying to get all the words down to “Satisfied.”

Flights, the literary journal produced by students at the school where I teach.

A staff recommendation tag at Elliott Bay Book Company drew me into buying Sawbones by Melissa Lenhardt a couple of weeks ago. It described it as a feminist Lonesome Dove and I was SOLD!

From: Blog
← Bearing Too Many Burdens: BEYOND BOLLYWOOD, THE SMITHSONIAN EXHIBIT ON INDIAN AMERICANS
Drunk on Ink Q & A with Shabnam Samuel and ‘A Fractured Life’ a memoir →
No comments yet