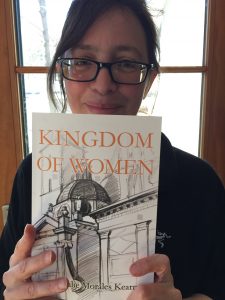 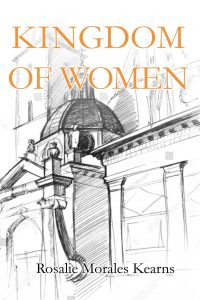 Rosalie Morales Kearns, a writer of Puerto Rican and Pennsylvania Dutch descent, is the founder of the feminist publishing house Shade Mountain Press. She’s the author of the novel Kingdom of Women (Jaded Ibis Press, 2017) and the magic-realist story collection Virgins and Tricksters (Aqueous, 2012), described by Marge Piercy as “succinct, smart tales rooted in a female-centered spirituality.” Kearns is also the editor of the short story anthology The Female Complaint: Tales of Unruly Women (Shade Mountain Press, 2015), praised by Kirkus Reviews as a “vital contribution to contemporary literature.”

About KINGDOM OF WOMEN

In a slightly alternate near-future, women are forming vigilante groups to wreak vengeance on rapists, child abusers, and murderers of women. Averil Parnell, a female Catholic priest, faces a dilemma: per the Golden Rule she should advise forgiveness, but as the lone survivor of an infamous massacre of women seminarians, she understands their anger. Her life becomes more complicated when she embarks on an obsessive affair with a younger man and grapples with disturbing religious visions. She had wanted to be a scholar, before the trauma of the massacre. Later, all she wanted was a quiet life as a parish priest. But now she finds she has become a mystic, and a central figure in the social upheaval that’s gathering momentum all over the world.

ROSALIE MORALES KEARNS:  The first books I fell in love with were Alice in Wonderland and Through the Looking Glass. I probably read them two dozen times as a child. As an adult I still read them, and still laugh.

Anything by Charlotte Bronte. When I was a teenager I assumed she was too stuffy to read.

Years after the massacre, when well-meaning acquaintances asked her how she felt, how she survived, Averil wanted to tell them about those encounters during the plague years. She was still there, she wanted to tell them, still on that road.

The writing doesn’t get easier, but I think it’s easier to find a publisher, and easier for the publisher to market your book, if you have a prior track record.

Cats, definitely. I have three of them. 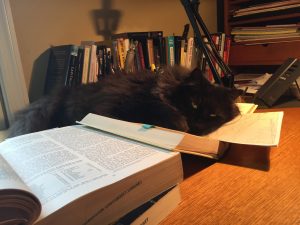 For several years in the 1990s I used to go to a wonderful feminist writing retreat in central New York State. One year the featured guest was Ruth Stone. Each morning, she and I were usually the first ones up because she was desperate for coffee and I was an early riser and woke up ravenously hungry. We would sit in the lounge and look out at Seneca Lake. I was in my early 30s and she was about 80 at the time, very unpretentious and easy to talk to, but I was too awed by her brilliance to say much. I do remember that we both loved spiders and were horrified at the idea of anyone killing them.

Someplace in a forest with lots of walking trails, but with a decent restaurant so I don’t have to do any cooking.

Carnival Evening, by Henri Rousseau. When I saw it for the first time at the Philadelphia Museum of Art, it was on the landing of a stairwell. It’s a large painting, and I kept backing up to get a better view and almost toppled over the railing.

I don’t really have a particular favorite Austen novel. I appreciate her genius, but her work doesn’t resonate with me the way Dickens and Charlotte Bronte do. Dickens in particular had such a sympathy for characters like Mr. Dick and Mr. Micawber, people the world considers unsuitable, unsuccessful, abnormal, etc.

I haven’t watched many film adaptations, so I don’t have a strong opinion. A few years ago I listened to several Austen novels as audiobooks, some of which I had read before and some I hadn’t. I love her omniscient narrators, their restraint and dry wit, how they gently but inexorably zoom in on a character’s foibles. I shudder to think how I would be portrayed in a Jane Austen novel. A Dickens narrator would be more forgiving, I think.

Architecture at the End of the Earth: Photographing the Russian North. The novel I’m drafting now is set partly in Russia. With all the historical research I’m doing sometimes I just want to look at pretty pictures.

From: Blog
← Drunk on Ink Q & A with Saadia Faruqi and ‘Meet Yasmin’
Drunk on Ink with S J Sindu and ‘Marriage of a Thousand Lies’ →
No comments yet