Drunk on Ink Q & A with Saadia Faruqi and ‘Meet Yasmin’ 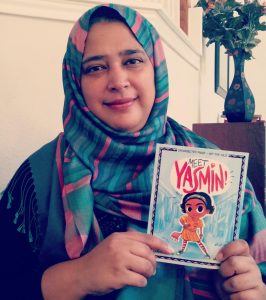 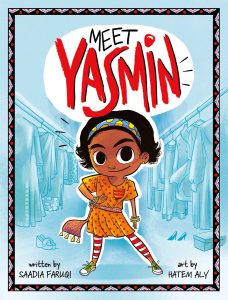 Saadia Faruqi is a Pakistani American author, essayist and interfaith activist. “Brick Walls: Tales of Hope & Courage from Pakistan” is her debut adult fiction book, and her children’s early reader series “Yasmin” is published by Capstone. She trains various audiences including faith groups and law enforcement on topics pertaining to Islam, and has been featured in Oprah Magazine in 2017 as a woman making a difference in her community. She is editor-in-chief of Blue Minaret, a magazine for Muslim art, poetry and prose. She resides in Houston, TX with her husband and children.

Yasmin Ahmad is a spirited second-grader who’s always on the lookout for those “aha” moments to help her solve life’s little problems. Taking inspiration from her surroundings and her big imagination, she boldly faces any situation?assuming her imagination doesn’t get too big, of course! A creative thinker and curious explorer, Yasmin and her multi-generational Pakistani American family will delight and inspire readers. [easy reader, for ages 5 and up].

SAADIA FARUQI: I always loved reading Shakespeare in high school, ranging from Romeo and Juliet to satisfy my romanticism, to Juliet Caesar and Merchant of Venice to feed my political and cultural curiosity. From American authors, I completely fell in love with Gone with the Wind in my teens, and must have read it several times. Of course as a Pakistani I had virtually no knowledge about the civil war and race relations, so it was just a good story to me.

Who is the illustrator for Meet Yasmin?

I’m ashamed to say I’m not a tea drinker despite spending half my life in Pakistan! My go-to poison is Diet Coke, which I consider the panacea of all ills, including healing migraines.

There are so many books which one should read, it’s a never ending list for me. For essays and opinion pieces, or for book recommendations, I always send people right to the Electric Literature website. I’ve found such gems over there, electric words that speak to the heart and the mind.

I was a good girl! I read all the classics. Possibly Dr. Zhivago is the one I couldn’t finish, and also anything by Hemmingway put me to sleep. So maybe those are ones I’d read again now. But on the other hand, now I’d much rather be reading newer books by women of color, immigrant stories and the like, rather than what is termed as classic.

A favorite quote from Meet Yasmin.

Meet Yasmin is an early reader for children, so there aren’t any deep, philosophical sentences I could quote.

The Breadwinner by Deborah Ellis. It’s the story of an Afghani girl who dresses up like a boy to earn for her family during the Taliban rule in Afghanistan. The book was a bestseller but the animated film, produced by Angelina Jolie, was equally fantastic.

Blue Willow Books in Houston. They have the best events, especially for children’s authors, and they are really a part of their community.

How much self-doubt I would have, and how seldom true inspiration would strike.

Yes it does. You learn by making mistakes and improve yourself in every aspect of the craft. A writers’ first book is not as good as the second one, and so on. You also learn about marketing and publicity, and things that worried you on book 1 don’t even make an impact on your mind on book 2 or 3. It’s definitely something that gets better as time goes on.

Love cats, but refuse to actually keep one as a pet. I don’t want to add to the number of living things that depend on me!

The Meet Yasmin! Cover is simply adorable. Once the book is published I may lose some of my wonder and begin to admire other books too.

Anything by Asha Boshle or Kuman Sanu. And Junoon. I’m old school like that.

Road tripping in the Norwegian mountains. We did this last summer and the scenes were just breathtaking! The sun doesn’t fully set in those parts in the summer months, so we literally would drive until midnight and not realize what time it was. I recommend it to everyone.

Van Gogh’s Starry Night. I realize it’s extremely popular, but I like it because of sentimental value. When my husband and I first got married, it was the first print we ever bought to hang in out tiny apartment. We’ve moved four states over the last twenty years but that painting still hangs in every bedroom we’ve ever slept in. It keeps me grounded in reality, and gives me a boost of confidence like nothing else.

I am not a huge fan of Jane Austen, but my favorite novel of hers is probably Emma. I just love the headstrong and misguided main character so much! In terms of adaptations, I’ll have to go with Bride and Prejudice, a Bollywood retelling with Aishwarya Rai as the heroine. If one is watching Austen, one might as well make it lively and colorful, with all the music and comedic drama of a Bollywood film.

I have to plug my own literary journal Blue Minaret, which publishes poetry, art and fiction by Muslim creatives. Other than my own I love Catapult not just for its literary offerings like essays but also the books it publishes.

Too many to count. Serpent’s Secret by Sayantani Dasgupta was the very latest one because Bengali mythical creatures and princesses.