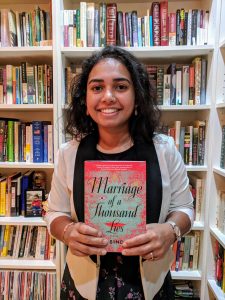 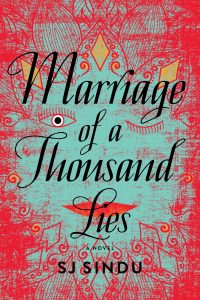 SJ Sindu was born in Sri Lanka and raised in Massachusetts. Sindu is the author of the novel Marriage of a Thousand Lies, which is a finalist for the Lambda Literary Award and the Publishing Triangle Award, and which was selected by the American Library Association as a Stonewall Honor Book. Sindu is also the author of the hybrid fiction and nonfiction chapbook I Once Met You But You Were Dead, which won the Split Lip Press Turnbuckle Chapbook Contest. A 2013 Lambda Literary Fellow, Sindu holds a PhD in Creative Writing from Florida State University, and currently teaches at Ringling College of Art & Design.

About Marriage of a Thousand Lies

Lucky and her husband, Krishna, are gay. They present an illusion of marital bliss to their conservative Sri Lankan–American families, while each dates on the side. It’s not ideal, but for Lucky, it seems to be working. She goes out dancing, she drinks a bit, she makes ends meet by doing digital art on commission. But when Lucky’s grandmother has a nasty fall, Lucky returns to her childhood home and unexpectedly reconnects with her former best friend and first lover, Nisha, who is preparing for her own arranged wedding with a man she’s never met.As the connection between the two women is rekindled, Lucky tries to save Nisha from entering a marriage based on a lie. But does Nisha really want to be saved? And after a decade’s worth of lying, can Lucky break free of her own circumstances and build a new life? Is she willing to walk away from all that she values about her parents and community to live in a new truth? As Lucky—an outsider no matter what choices she makes—is pushed to the breaking point, Marriage of a Thousand Lies offers a vivid exploration of a life lived at a complex intersection of race, sexuality, and nationality. The result is a profoundly American debut novel shot through with humor and loss, a story of love, family, and the truths that define us all. A necessary and exciting addition to both the Sri Lankan-American and LGBTQ canons, SJ Sindu’s debut novel Marriage of a Thousand Lies offers a moving and sharply rendered exploration of friendship, family, love, and loss.

First author/book you read/fell in love with?

I grew up reading, and have had a lot of obsessive loves for certain books, but I’ll say that these two were special. Tim O’Brien’s The Things They Carried, and Tanuja Desai Hidier’s Born Confused. Each of these reflected experiences I’d had and had never thought I could write about.

Beer! Though I love tea as well.

That’s so tough! I would say, right now, with the world the way that it is, Octavia Butler’s Kindred should be required reading. For Americans, it’s important to know about our horrific past with slavery in respect to the present. For non-Americans, it’s still important to know the awful things the U.S. has done on its own soil, and where the current race tensions come from.

“Most people think the closet is a small room. They think you can touch the walls, touch the door, turn the handle, and walk free. But when you’re inside it, the closet is vast. No walls, no door, just empty darkness stretching the length of the world.”

I could name a lot of hoity-toity titles, but honestly the only films I end up watching over and over that are based on books are the Harry Potter movies.

I have a soft spot for the Harvard Bookstore in Cambridge, MA.

It’s not so much I didn’t know this but that I didn’t believe it when someone told me. I wish I’d believed that everything does not magically become clouds and rainbows after you sign your first book contract. There’s still so much plodding, important, hard work that follows. There are highs and lows, and the only difference now is that you’ve published a book—which, to be fair, is still an accomplishment to be celebrated.

Yes. Definitely. The longer your cred list, the easier it is to get people to take you seriously, whether they be publishers or readers. And as far as writing, it gets easier and easier for me to put my butt in the chair, but the actual writing? That’s always a carrot on a stick—you never reach your ideal, and that’s the point. That’s what makes it worth doing. 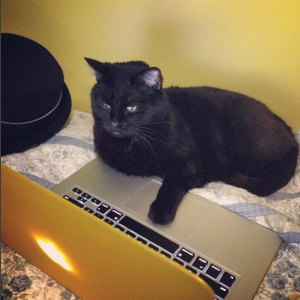 I love the little silver dots on Exit West by Mohsin Hamid. I don’t know why, but there’s something about the blues and the silver that I just love.

I cycle through favorite songs on a weekly basis. This week, it’s “Mama Said” by The Shirelles.

I think this was at AWP Minneapolis a few years ago—I went to my first South Asian American writers’ meetup, and it was mind blowing. I’d been so cut off from this community for so long, and had no idea how much I actually needed it. I’m so, so happy I went and met some amazing people.

Tropical beach house with a bunch of friends, and easy access to queer-friendly bars and dance clubs.

I don’t have a particular piece of artwork, but I love Frida Kahlo and Salvador Dali.

Favorite novel is Emma. I used to love the Bollywood version of Pride and Prejudice–  Bride and Prejudice — the one with Aishwarya Rai. It’s not great art, in terms of acting or writing, but there’s something so subversive about brown people appropriating an English novel.

I love The Cupboard Pamphlet, and I have a special love for The Normal School.

I was in Charis Books, a feminist independent bookstore in Atlanta, and picked up Trust No Aunty by Maria Qamar, because I love her artwork.