Drunk on Ink Q & A with Anne Boyd Rioux and “Meg, Jo, Beth, Amy: The Story of Little Women and Why It Still Matters” 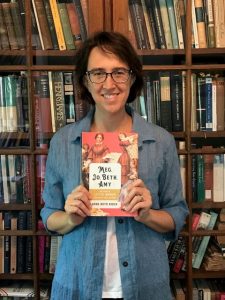 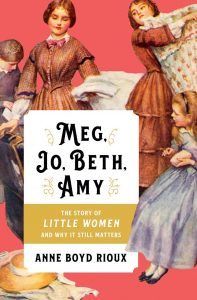 Anne Boyd Rioux is the author or editor of six books about nineteenth-century American women writers, including Meg, Jo, Beth, Amy: The Story of Little Women and Why It Still Matters, which will be published on August 21, 2018. She has also written Constance Fenimore Woolson: Portrait of a Lady Novelist,  named one of the ten best books of the year by the Chicago Tribune. She is a professor of English at the University of New Orleans and the recipient of two National Endowment for the Humanities fellowships, one for public scholarship.

About Meg, Jo, Beth, Amy: The Story of Little Women and Why It Still Matters

Soon after publication on September 30, 1868, Little Women became an enormous bestseller and one of America’s favorite novels. Its popularity quickly spread throughout the world, and the book has become an international classic. When Anne Boyd Rioux read the novel in her twenties, she had a powerful reaction to the story. Through teaching the book, she has seen the same effect on many others. In Meg, Jo, Beth, Amy, Rioux recounts how Louisa May Alcott came to write Little Women, drawing inspiration for it from her own life. Rioux also examines why this tale of family and community ties, set while the Civil War tore America apart, has resonated through later wars, the Depression, and times of changing opportunities for women. Alcott’s novel has moved generations of women, many of them writers: Simone de Beauvoir, J. K. Rowling, bell hooks, Cynthia Ozick, Jane Smiley, Margo Jefferson, and Ursula K. Le Guin were inspired by Little Women, particularly its portrait of the iconoclastic young writer, Jo. Many have felt, as Anna Quindlen has declared, “Little Women changed my life.”  Today, Rioux sees the novel’s beating heart in Alcott’s portrayal of family resilience and her honest look at the struggles of girls growing into women. In gauging its current status, Rioux shows why Little Women remains a book with such power that people carry its characters and spirit throughout their lives.

ANNE BOYD RIOUX: Betsy, Tacy, and Tib by Maud Hart Lovelace because it transported me to a simpler time of evenings gathered around the piano and afternoons roaming the outdoors with your best friends. I wanted desperately to go there. And ever since I’ve had a romantic attachment to the 19th century. Go figure.

Little Women because we all need to read more books about women and girls and this one is the best for thinking about what it’s like to grow up in a female body and to adjust your dreams along the way.

Little Women—sadly I didn’t read it until graduate school. Although it did me a lot of good in my early twenties, I wish I had read it earlier, and I think it’s an important YA book, although it’s often pigeonholed as a book for little girls.

This is from Elena Ferrante’s acclaimed novel My Brilliant Friend (2011).

Lila and Lenú meet every day for months in the courtyard to read Little Women together, “so many times that the book became tattered and sweat-stained, it lost its spine, came unthreaded, sections fell apart. But it was our book,” Lenú explains, “we loved it dearly.”

I’d sound like a broken record if I said Little Women, so I’ll say Pride and Prejudice. I loved the BBC miniseries with Colin Firth. I think I watched it twenty times, and I had the soundtrack on cassette tape. I listened to it while I was studying and writing all through graduate school.

Octavia Books in New Orleans. They are amazing.

It’s hard to pinpoint one thing. I keep being surprised by it. Probably the most important thing I’ve learned, though, is that, as a nonfiction writer, I need to tell the story in my own voice. As an academic, I learned to let other people tell the story and to quote a lot. But I’ve had to retrain myself as I write for a general audience now.

Yes, thank God! There are still many things to learn, though, as each project is different. 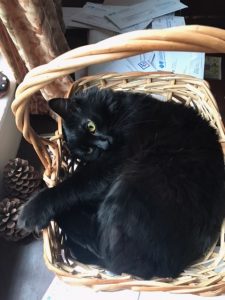 English countryside with a trip to London.

I’m a sucker for the Penguin Classic black covers.

“Sunday Bloody Sunday” by U2

I love meeting fans of Little Women and hearing their stories of how they read the book to rags growing up. The most astonishing was from a woman in her fifties who recited Beth’s death scene from memory, although she hadn’t read the book in decades.

I’m not sure if this counts as a small press, but I’m very impressed by the books being put out by the New York Book Review Classics.

Becoming Americans in Paris: Transatlantic Culture Between the World Wars—because I’ve become fascinated with an American woman writer, Kay Boyle, who lived in France between the wars and actually stayed there until 1941, only leaving when she had to after the German invasion.