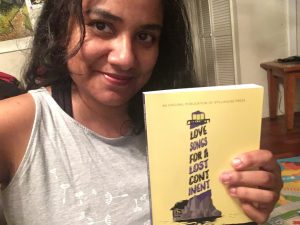 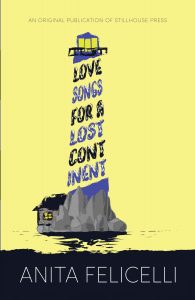 Anita Felicelli is the author of the short story collection “Love Songs for a Lost Continent” (Stillhouse Press) and other books. Her writing has appeared or is forthcoming in the New York Times, Salon, SF Chronicle, Los Angeles Review of Books, The Rumpus, Joyland, Kweli Journal, Eckleburg Review, The Normal School, and elsewhere. She was born in South India and raised in the Bay Area, where she lives with her family.

About “Love Songs for a Lost Continent“:

Imbued with magic, Felicelli’s stories center on first- and second-generation Tamil Americans–immigrants, daughters, and lovers exploring what it means to lose and to love, to continually reinvent oneself while honoring the personal histories and lost continents that shape us all.

ANITA FELICELLI: The first books I fell in love with were the Betsy-Tacy series by Maud Hart Lovelace and The Wizard of Oz series by L. Frank Baum. The former because I had two best friends in elementary school and saw myself in Betsy who was an aspiring writer and who needed a private place to write stories and poems and plays. The latter because it was so fantastic, so full of strangeness and wizardry and humbug and powerful women.

James Baldwin’s long short story Sonny’s Blues should be read by everyone. The ache in the relationship between the narrator and his brother is so potent. I think about that story so often. Other mandatory short stories for me are Denis Johnson’s Car Crash While Hitchhiking, Gabriel Garcia Marquez’s The Very Old Man With Enormous Wings, Robert Coover’s Going for a Beer, and Rebecca Lee’s Slatland.

Oh, I’m still embarrassed I didn’t make it through War and Peace as a teenager. My self-concept was based so wholly on reading, I might as well have been a walking compendium of paper and ink rather than flesh and blood, and I loved Anna Karenina, yet when it came to that giant beast of a book, I just threw up my hands thinking there were too many boring bits (yet somehow I loved even the whale bits in Moby Dick).

“Watching flames destroy the land that I love, it is Howl, my familiar, my double, my twin, who starts to sing for the first time. The sound escaping his body is magnificent and otherworldly, telling of ghosts and cities and sirens — an unyielding green scream.”

I loved Stephen Daldry’s adaptation of Michael Cunningham’s The Hours. It didn’t strangle itself trying to hold on to the text, but in translating the story into a visual medium, it also didn’t butcher what made the novel so lovely, the way some adaptations do.

Honestly, whichever one I’m in. I adore my local indie bookstores, from which I’ve been buying books for decades: Book’s Inc., Bell’s Books, and Kepler’s, but I have a particular soft spot for City Lights Bookstore. I’m partial to City Lights’ narrow little staircase, its door that announces itself as a door, the mural out in the North Beach alley that runs alongside its outer wall, and most of all, its substantive subversive and radical literature section.

I wish I’d understood how much rejection would be involved in the writing life, which I decided to enter when I was five-years-old. I remember finally getting a handwritten rejection letter from Seventeen Magazine when I was 18. It praised my short story and said it was a near miss, but also noted that the ending was “a little hard.” As an intense perfectionist, I thought about that note for years, trying to figure out what it meant and how I could use this feedback to “fix” my stories. In fact, decades later, I have not excised my hardness, but I so wish I had been the kind of person who’d briefly considered how cool it was that I got a note at all and moved on!

Dog! But specifically corgis, which some people think are cat-like.

I’m desperate to visit Antarctica before it melts and disappears.

For a period I wanted to be an art director or design book covers as my day job, and my favorites were the covers of Vladimir Nabokov novels from the 80s or 90s, designed by Susan Mitchell. She was the art director at Vintage International and I basically would buy or borrow books solely on the strength of her covers – judging books by their covers was how I discovered Diane Ackerman and Julian Barnes and many others in my tweens and adolescence before I ever read book reviews.

The Pixies’ cover of Head On… I’m also terribly vulnerable to Iris Dement’s Our Town and Social Distortion’s Story of My Life, both of which recently made me pull over in my car and sob on the side of the road.

Too many! I used to be a visual artist. At present, Olafur Eliasson’s One Way Color Tunnel and Louise Bourgeois’s Spiders.

I don’t get out much.

Emma is my favorite, but the older I get the more I realize Persuasion will eventually overtake it. I love the Greer Garson-Lawrence Olivier “Pride & Prejudice,” the first Austen film I ever watched – what a fluffy, lovely, if defanged, viewing experience.

Anyone running a literary journal or small press is a hero, but I especially recommend two literary journals that are close to my heart and are helmed by fearless, outstanding women editors – Kweli Literary Journal and Eckleburg Review. Kweli is a beautiful online journal that consistently publishes some of the most illuminating writing by people of color in America. Eckleburg is a literary journal that’s so sharp, weird, and intelligent, you could cut yourself on its gleaming brilliance.

Lauren Groff’s Florida – I’ve read all her books – I geek out over her gorgeous sentences.

From: Blog
← Drunk on Ink Q & A with Sonya Huber and “Drunk Women Takes Your Keys’
Chaitali Sen and ‘The Pathless Sky’ →
No comments yet