by Soniah Kamal on August 14, 2018
Drunk on Ink is a blast interview series by Soniah Kamal author of  the novel Unmarriageable a parallel retelling of Jane Austen’s Pride and Prejudice and set in contemporary Pakistan 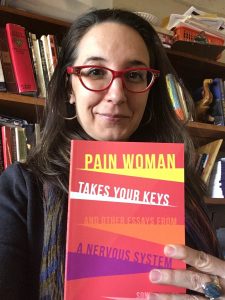 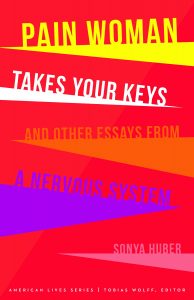 Sonya Huber is the author of five books, including Opa Nobody, Cover Me: A Health Insurance Memoir, and the new essay collection Pain Woman Takes Your Keys and Other Essays from a Nervous System. She teaches at Fairfield University, where she directs the low-residency MFA program. She is a displaced Midwesterner, mom, Buddhist, loud-laughter, and says “dude” and “awesome” much more than she should.

Rate your pain on a scale of one to ten. What about on a scale of spicy to citrus? Is it more like a lava lamp or a mosaic? Pain, though a universal element of human experience, is dimly understood and sometimes barely managed. Pain Woman Takes Your Keys, and Other Essays from a Nervous System is a collection of literary and experimental essays about living with chronic pain. Sonya Huber moves away from a linear narrative to step through the doorway into pain itself, into that strange, unbounded reality. Although the essays are personal in nature, this collection is not a record of the author’s specific condition but an exploration that transcends pain’s airless and constraining world and focuses on its edges from wild and widely ranging angles. Huber addresses the nature and experience of invisible disability, including the challenges of gender bias in our health care system, the search for effective treatment options, and the difficulty of articulating chronic pain. She makes pain a lens of inquiry and lyricism, finds its humor and complexity, describes its irascible character, and explores its temperature, taste, and even its beauty.

SONYA HUBER: Oh my gosh…. My first true love of an author was George Orwell. It was when I read 1984 in high school that I fully understood exactly how deep an author could get into my head and heart. What Orwell does with language continues to thrill and inspire me.

Right now I think Orwell’s “The Politics of the English Language” should be wallpapered everywhere.

I really really wish I would have read Portrait of a Lady by Henry James because I needed that kind of warning about dysfunctional relationships and how a woman could be almost consumed by a controlling man.

“The pain-woman speaks in a pared-down voice; she is a dreamy laser. You can’t tell her a single thing. She has room for only one emergency. She has to creep slowly and hold onto the back of chairs as she moves, but she has a strange superpower. She cares more about the vulnerable soft flesh of everyone more than my normal busy pre-pain self.

She aches in slow motion for everyone’s crumbling life.”

Your favorite book to film

I can’t think of one!

Women and Children First in Chicago. Also the Strand in New York.

I wish I’d known that I was as good a writer as anyone else. I gave up on writing after I graduated college because I thought I was lacking something essential. I later learned that the only thing writing requires is persistence, plus a brash ability to bother strangers.

I think each book offers its own problems and challenges, and at a certain point (or many points) in the middle of each book, those problems appear to be practically impossible to solve. But what I think gets easier is the routine of working through a book; the general feeling of being lost inside a book comes to feel more familiar and even becomes comfortable as a place to live rather than as a crisis. I think each round of book marketing is as challenging as the first time, but I know not to just appear at a bookstore and hope people will show up.

The cover of Lynda Barry’s What It Is, a beautiful hand-drawn and hand-painted sea of monkeys and fire and sea creatures and other images.

“No Depression” by Uncle Tupelo

My ideal vacation would be to go to a literary city (maybe London) and just have time all by myself to write and to wander around museums, do research, etc. BUT I would also love to go to India someday, or Greece! So many places I haven’t been.

This is a terribly difficult question. I will have to say that when it comes right down to it, I always go back to the box assemblages made by Joseph Cornell.

I have to say my favorite film adaptation is Sense and Sensibility because: Emma Thompson. As far as the novels themselves, I loved Mansfield Park for its social critique.

University of Nebraska Press! And I love Brevity: A Journal of Concise Nonfiction.

I took a trip to Mass Museum of Contemporary Art and bought a thick book entitled Explode Every Day: An Inquiry into the Phenomena of Wonder. It’s a miraculous hodgepodge of images, interviews, and ideas that all circle around the concept of wonder, which I love.