Drunk on Ink Q & A with Anju Gattani and ‘Duty and Desire’, a novel 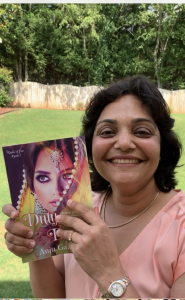 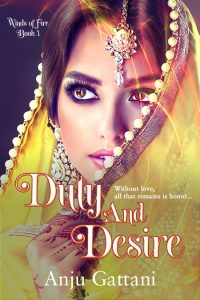 About Duty and Desire

To uphold family honor and tradition, Sheetal Prasad is forced to forsake the man she loves and marry playboy millionaire Rakesh Dhanraj. As her world splinters into a web of lies, deceit and betrayal, Sheetal must find a way to ally with the stranger she married in order to protect their infant son from his family’s tyranny.

ANJU GATTANI: My first book crush was ‘The Owl Who Was Afraid Of The Dark’ by Jill Tomlinson. I must have been around 7 or 8 at the time and was petrified of the dark. However, the title piqued my curiosity because owls are night animals and I figured it might be a fun read! I finished the book and lo and behold! I was no longer afraid of the dark! I couldn’t believe the power of story and its ability to fade away my fears. My second crush shortly after was ‘Charlie and The Chocolate Factory’ by Roald Dahl. I was heartbroken for Charlie Bucket. I desperately wanted Charlie to win the golden ticket. I also remember wanting to eat buckets of chocolate and drown myself in chocolate during the read and it hit me again—the power of words to arouse our senses. The author was able to whisk me off to a land of chocolate delight and make me feel emotions for a character that didn’t exist! As a teenager, master storytellers, Sidney Sheldon and Virginia Andrews opened my eyes to the power of creating living, breathing characters, taking readers across continents and travelling the mind to deep, dark places where secrets, mental disorders and hidden children (Flowers In The Attic series) lurk.

I’m a coffee drinker but to unwind lemon tea is my passion—not because I live in Georgia where iced tea is a southern thing. Lemon tea is a Hong Kong thing, and the drink always hits my unwind and rewind buttons.

The Kite Runner by Khaled Hosseini has the power to change perceptions, an understanding and interpretation of the world as we see it and the ability to spark hundreds of conversations. The international runaway bestseller is a story of redemption and follows Amir from a tender elementary school age to adulthood but is a reminder that we are human, prone to making mistakes and have the ability to atone for our past… it’s never too late. The Kite Runner left me with a deep impression that these sort of books should be mandatory reading at higher levels in schools because of the gripping story, numerous symbols and metaphors that change with the story and characters everyone can relate to.

Favorite quote from your book J

From Duty and Desire:

A vortex of heat spiraled up Sheetal’s gut. She screamed as flames danced on her hand, leaping to the hathphools, mehndi, and gold bangles.

This couldn’t be happening. But it was real. She was burning. She was on fire. She was fire.

The perseverance and determination required to solve problems in story, revisions, rewrites and more. Then there’s the business side of finding the right agent, publisher, marketing… it’s like living a whole other life parallel to your own real life. And when you’re writing fiction, you sometimes wonder which life is fiction and which one real?? My greatest prize is finding my tribe!

The more you know, the more you grow and the more to figure out. I’ve been developing the Winds of Fire series for 20 years now so applying changes to 1 book has often meant a chain reaction in the series. I’d love to say it gets easier, but the truth is the writing part does to some extent because you learn some along the way. As you deal with more complex stories and points of views, the writing does get harder but you continually want the next book to be better than the one before.

Marketing, however, is a whole other ballgame. Anyone want to play?

So we have a pet lionhead bunny, Maurice aka MoMo, and he thinks he’s a dog or one of us or something like that. I’m a dog person at heart and love all furry creatures great and small (hamsters and guinea pigs included). I love watching animal documentaries and David Attenborough is my all-time favorite!!

Cancun! Or Safaris or places full of adventure!

‘The Henna Artist by Alka Joshi. I’m from Jaipur and that book cover just blew me away!

‘Hear Me Now’ by Alok

‘All Or Nothing’ by Lost Frequencies

‘All The Lovely Pieces’ by J. M. Winchester – friend’s recommendation and I can’t put down the book!! It’s a gripping psychological thriller and I can’t turn the pages fast enough!