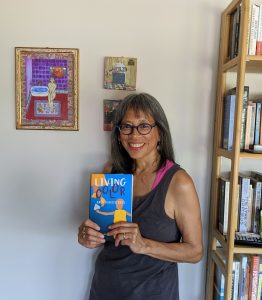 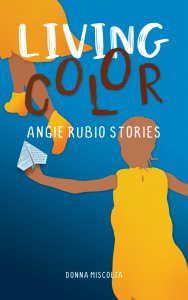 Donna Miscolta’s third book of fiction Living Color: Angie Rubio Stories is due out from Jaded Ibis Press in September 2020. Her story collection Hola and Goodbye, winner of the Doris Bakwin Award for Writing by a Woman and published by Carolina Wren Press (2016), won an Independent Publishers award for Best Regional Fiction and an International Latino Book Award for Best Latino Focused Fiction. She’s also the author of the novel When the de la Cruz Family Danced (Signal 8 Press, 2011). Her book reviews, stories and essays have appeared in various print and online journals. She grew up in National City, CA but has lived most of her adult life in Seattle. Find her at donnamiscolta.com.  Twitter    Instagram

Set in California in the 1960s and ’70s, the linked stories in Living Color take Angie Rubio year by thorny year from kindergarten through high school, offering a humorous, biting, but always compassionate portrait of the artist as a shy, awkward Mexican-American girl. Against the backdrop of the Cold War and civil rights eras, Living Color delivers the milestones of American girlhood—slumber parties, training bras, proms—through the eyes of “brown, skinny, and

bespectacled” Angie, who learns early that pageant winners, cheerleaders, and the Juliets in school plays are always white, and that big vocabularies are useless in navigating cliques and clubs. Living Color: Angie Rubio Stories traces Angie’s formation as a writer, from the diffident, earnest child who jots down new words in a notebook to the emboldened high school student publishing unpopular opinions in her new “loud-enough-to-be-heard” voice.

DONNA MISCOLTA: I read Little Women multiple times while in elementary school. It was about sisterhood, dreams, ambitions, and rebellion. I sort of had those things, but not in the same way these fictional little women did. If I failed to be like them, I could always rely on the fact that they weren’t real and lived in a long-ago time. So for me, it was escapist literature.

I love Lauret Savoy’s book Trace. It’s both her personal journey to uncover the story of her forbears, which included slaves, Native Americans, and white settlers, and a broader history of the land. A geologist, her exploration of the land upon which her ancestors lived, suffered, and died reminds us that everywhere we walk in America, no matter how it has changed through natural or manmade forces, it is land that belonged to someone else. Tied in with its geological and ecological history are human stories, painful, unjust, and vital to our understanding of ourselves as a country.

Anna Karenina. Maybe I was a little afraid of its voluminousness. Now I have an unread copy on my shelf, one I picked up at a book swap some years ago. It’s a 1944 edition with illustrations. It seems a bit fragile so now I’m a little afraid of breaking it if I were to read it. 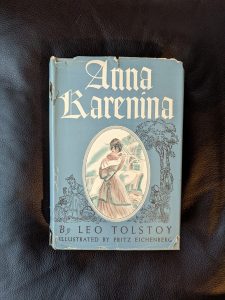 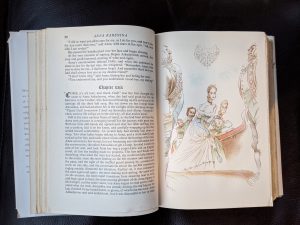 She went off in search of illumination.

The Remains of the Day is one that stands out to me. The performances by Anthony Hopkins and Emma Thompson were so exquisitely wrought. The melancholy and sense of loss evoked in the book were made big-screen-real.

Elliott Bay Book Company has been a vital part of both my reading and writing life. I always feel at home there. I also have a fondness for Phinney Books, a lovely narrow, little store with an excellent reading series in pre-Covid times, a delightful newsletter, and T-shirts for sale labeled Made-Up and True.

I wish I’d known sooner that it was something I could have. The writing life just means that you include writing as part of your life. It took me a long time to acknowledge the deeply suppressed desire to be a writer and then to just do it.

Writing is always hard, but now I’m probably more confident that I can eventually get something good out of what often starts out flat and directionless.

Publishing doesn’t seem to get any easier. I feel lucky to have landed with the three small presses I did. I’ve tried at various time to get an agent but it’s like when I was ten and had to go door-to-door to try to sell Girl Scout cookies. It was demoralizing. There was no answer. No one home. Or it was, no thank you. Or I love your cookies, but… The but, always the mystifying but. Yes, rejection is part of the process, but …

The marketing mystery does get a little less mysterious each time. You learn something with each book. Still, I’m not great at it, so I’m always grateful for my press’s efforts to get my book noticed. And I’m grateful for opportunities like this one to share information about my work and the quirks and impulses behind it. 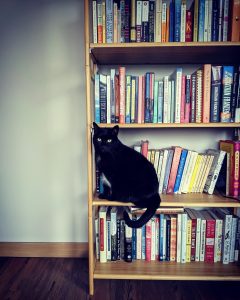 Last year my husband and I visited several cities in Spain, including Málaga where we rented an apartment overlooking a small plaza in the Centro Histórico. Each morning from my sixth-floor window, I watched the restaurant staff set up tables and chairs in the plaza, smelled the coffee, and listened to the greetings. We left the apartment mid-morning to explore the city. After lunch, we rested, then walked to the beach. Each evening we listened to whichever musician happened to claim a spot in the plaza. It was at that time of the day that I wrote. Later after the music stopped, I watched the restaurants close and listened to the sound of tables being folded, chairs stacked, and awnings collapsed. I watched the lights dim and then I drew the curtains and wrote some more. At some point, I heard the footsteps of the last person leaving the plaza. I want more of this kind of vacation.

Well, besides the cover of my previous book Hola and Goodbye, which has a gorgeous papel picado design, I also really love the cover of my friend Anne Germanacos’s first book In the Time of the Girls. It’s stark and moody and suggests much depth of emotion.

Oh, that changes with time and mood, but a perennial favorite is Marvin Gaye’s “What’s Going on?” The voice, the vibe, the lyrics with that big question trying to make sense of the world – all of it making you both sad and hopeful. Lately, I’ve been charmed by Jose Conde’s “Bolitas de Arroz con Pollo.” It’s a song about food – rice and chicken – to a mambo beat. It’s delicious and fun.

I’m not sure it’s my favorite, but Oswaldo Guayasamín’s painting Lárimas de sangre is one of the most affecting and grotesquely beautiful paintings I’ve seen. It hangs in the Casa Museo Guayasamín in Quito. It’s dedicated to Salvador Allende, Pablo Neruda and Victor Jara, all of whom were killed during the 1973 U.S.-backed, right-wing coup in Chile.

At an AWP conference several years ago, Robin Miura of Blair approached me after my panel ended to introduce herself. I had earlier learned that my story collection Hola and Goodbye was a finalist for the press’s The Bakwin Award for Writing by a Female-identifying writer, with Randall Kenan making the final selection. Meeting Robin, whom I immediately liked, made me hope more than ever that my book would win the prize and publication with Carolina Wren Press, which it did. I’m forever grateful.

Pride and Prejudice is the one I’ve read multiple times. Favorite film adaptation is the BBC miniseries with Colin Firth.

In 2014 my story “Ana’s Dance” won the Lascaux Review’s Lascaux Prize in Short Fiction. Since then, I have received periodic emails from editor Stephen Parrish asking for publishing news to share in the Review’s newsletter. It’s such a generous gesture by Parrish to stay in touch with contributors and show an interest in their published work subsequent to their appearance in Lascaux Review.

Last year when travel was still a thing, it was my first year as a retiree and I managed to visit three Spanish-speaking countries. Each time, I felt compelled to visit bookstores. In Oaxaca, Mexico, I bought El cerebro de mi hermano, a memoir by Rafael Pérez Gay about his philosopher/ writer/ diplomat brother’s degenerative disease. In Madrid, I bought a novel by a madrileño; in Málaga, I bought a novel by a malagueña; and in Quito, I bought a novel by a quiteña. I bought these books because I love books and love to support bookstores wherever I happen to be, but also because one of my goals is to become fluent in Spanish before I die. I figured reading books in Spanish is one way to accomplish this. The only book I managed to finish was the memoir by Gay. I read it twice, in fact, dictionary at the ready. I hope to get back to the others one day and I hope to be able to read Spanish with more ease when I do.