Drunk on Ink Q & A with Ruth Franklin and “Shirley Jackson: A Rather Haunted Life” 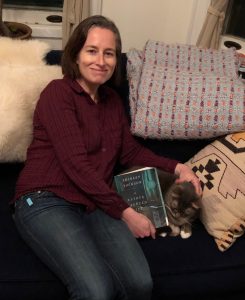 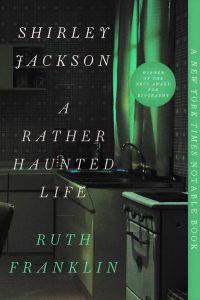 Ruth Franklin is a book critic and former editor at The New Republic. Her book Shirley Jackson: A Rather Haunted Life (2016) won numerous awards, including the National Book Critics Circle Award for Biography, and was named a New York Times Notable Book of 2016, a Time magazine top nonfiction book of 2016, and a “best book of 2016” by The Boston Globe, the San Francisco Chronicle, NPR, and others. She is also the author of A Thousand Darknesses: Lies and Truth in Holocaust Fiction (2011), which was a finalist for the Sami Rohr Prize for Jewish Writing. Her criticism and essays appear in many publications, including the New Yorker, the New York Times Magazine, the New York Review of Books, and Harper’s. She is the recipient of a Guggenheim Fellowship in biography, a Cullman Fellowship at the New York Public Library, a Leon Levy Fellowship in biography, and the Roger Shattuck Prize for Criticism.

About Shirley Jackson A Rather Haunted Life

Instantly heralded for its “masterful” and “thrilling” portrayal (Boston Globe), Shirley Jackson: A Rather Haunted Life reveals the tumultuous life and inner darkness of the literary genius behind such classics as “The Lottery” and The Haunting of Hill House. In this “remarkable act of reclamation” (Neil Gaiman), Ruth Franklin envisions Jackson as “belonging to the great tradition of Hawthorne, Poe and James” (New York Times Book Review) and demonstrates how her unique contribution to the canon “so uncannily channeled women’s nightmares and contradictions that it is ‘nothing less than the secret history of American women of her era’ ” (Washington Post). Franklin investigates the “interplay between the life, the work, and the times with real skill and insight, making this fine book a real contribution not only to biography, but to mid-20th-century women’s history” (Chicago Tribune). “Wisely rescu[ing] Shirley Jackson from any semblance of obscurity” (Lena Dunham), Franklin’s invigorating portrait stands as the definitive biography of a generational avatar and an American literary genius.

RUTH FRANKLIN: The first book I was truly, madly, head over heels obsessed with was Emily of New Moon, Lucy Maud Montgomery’s coming-of-age story about a girl who wants to be a writer. I even named two trees in our backyard after Emily and her best friend, Ilse. Emily was everything I wanted to be: orphaned, psychic, and an amazing writer.

It should be mandatory just to read, period.

Moby-Dick. Will I ever make the time for it now?

Can I give my favorite Shirley Jackson quote instead? It’s the first line of The Haunting of Hill House:

“No live organism can continue for long to exist sanely under conditions of absolute reality; even larks and katydids are supposed, by some, to dream.”

Rebecca. Film and book are both great.

Shout-out to my locals, Community Bookstore in Brooklyn and McNally Jackson in Manhattan. I’ll never get tired of browsing in The Strand. On my book tour, I visited Midtown Scholar in Harrisburg and was blown away by their gorgeous building and huge selection.

Writing anything—a biography, a book review, an email, this questionnaire—takes at least twice as long as I think it will.

Does writing/publishing/marketing get any easier with each book published?

I definitely found the process easier for my second book than for my first. But I wrote my first book with two tiny children and tried to market it while going through a divorce, so just about anything would be better than that. In all seriousness, though, one thing that helped with SHIRLEY JACKSON was that I connected with readers throughout the writing process via social media. There are a lot of Jackson fans out there, and it was fun to be able to share tidbits about my research along the way—like the barn full of previously undiscovered letters I was lucky enough to find. 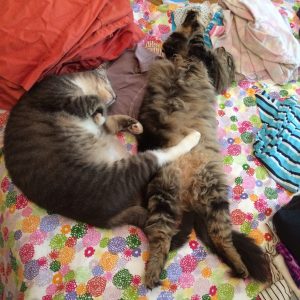 Funny, this question gave me the most trouble of them all. I’m not a very visual person, and either book covers don’t linger in my mind or they become inseparable from the experience of reading the book itself.

“Heroes” by David Bowie or “Aicha” by Cheb Khaled (for sentimental reasons).

Europa Editions, although do they still count as a small press after publishing Ferrante? Pushkin Press has the most adorable little editions of classics. As for literary journal, RIP Tin House.

I’m embarrassed to say I impulse-buy books all the time. I just treated myself to two new cookbooks—Saladish by Irene Rosen and The Smitten Kitchen Cookbook—because I’m bored with all my food. I also just bought both of Zadie Smith’s essay collections to potentially use in a criticism class I’ll be teaching next semester.