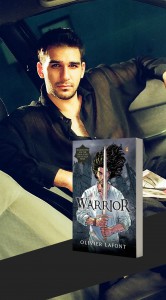 Shortlisted for the Tibor Jones South Asia Prize, the novel Warrior (Penguin 2014) opens with a compelling image of a watch repairman sitting at his store along Marine Drive, sighing at the 40-degree Celsius heat and waiting for the monsoon to stop “flirting” with the citizens of Mumbai. When it finally does break “without warning, the air turn[s] to water, drenching him in seconds” as he hears the city “finally exhale after the long hot summer months.” This cinematic opening, lush with sensual imagery, seamlessly flows into an epic fantasy story spanning nearly the entire geography of India.

When asked about his writing process, author/actor Olivier Lafont said he first wrote Warrior as a feature-film screenplay more than a dozen years ago. According to him, “the entire process—of writing, editing, publishing—all happened in a really lovely, flowing way.”

OL: I wrote the original film screenplay in Delhi in, I think, about a month. I moved to Mumbai to write my first film, and then it was some years before I returned to the story and started the novel. I was working full-time and writing Warrior on weekends, so my sense of the time it took is distorted. I estimate about three-four months total.

SP: What inspired the story?

OL: I had just graduated from university in the US and had decided to return to India, and I wanted to write a film that would be Indian but have Hollywood’s scale, epic feel, and special effects—that was the specific inspiration.

SP: Indeed, the novel features a wide range of visual landscapes, epic battles between gods and humans, and a warrior demi-god protagonist with powers akin to a superhero – all key ingredients for the making of a blockbuster action film with a mythological base. Why Hindu mythology in particular?

OL: I was very young when my family moved from France to India, and my first introduction to Indian culture was through Hindu mythology. I have always had an interest in world mythologies, so I absorbed Hindu mythology enthusiastically. In Warrior, I was writing an Indian story and a fantasy story, so Hindu mythology felt like an apt choice.

I looked into my Indian influences for more general inspiration and inevitably turned to the Mahabharata.

SP: Why that particular text?

OL: The Mahabharata is in essence a story of warring families, of cousins who grow up together and end up slaughtering each other, set against this massive backdrop of a divine conflict, where gods and demigods and demons walk amongst us. In Warrior, I wanted a fractured family at the centre, with a similar epic setting of a world about to end.

SP: How much of the mythology is accurate, and how much did you make up?

OL: The broad strokes of mythology in the book are accurate, and all the detailing and characterization of it is where I allowed myself the liberty to create something new. The Pure Glass, the horse mythology/history, and the supreme blessing were inventions, but I was careful to tailor them according to Indian thought and culture. For example, the concepts of the multiverse and traveling along quantum shifts, and ultimately Shiva re-ordering the universe with a single yogic breath, are all tied, in my mind, to the concept of maya.

SP: When you conceived the idea for Warrior, which came first— theme, plot, or character? And what was your research process like?

OL: I think the theme came to mind first, of something epic and dramatic, and the structure and plot came closely after. The research was part of the writing flow. Whenever I introduced a new element, I would explore that fully in order to see how I could best place and use it narratively. 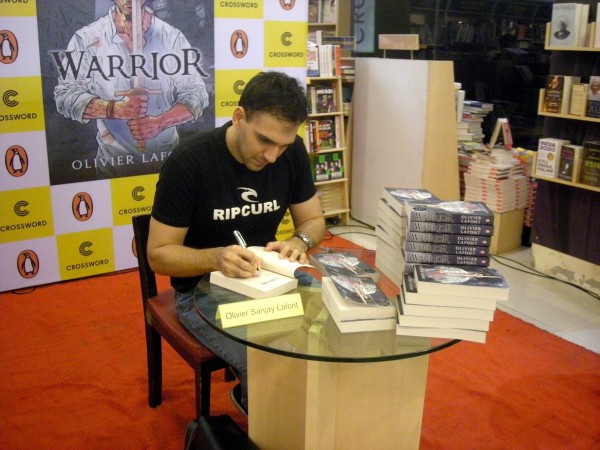 SP: The story is at once very particular and universal. Broadly speaking, the central theme of the novel can be seen as heroism, against a backdrop of good vs. evil. How do you define heroism? How does your protagonist Saam define it?

OL: For me, heroism is having the courage to know who and what you are and to carry out your purpose with conviction. In many respects, it’s the same with Saam, who has struggled with his own capacity for bad choices, thoughts, and actions – so his heroic turmoil has a heavily moral tinge. But Saam’s story is fictional, and has a three-act structure, and he’s a classic tragic hero who redeems himself. His heroism, as I’ve crafted it, is symbolic and easy. Real-life heroism, the kind that raises us above the mundane realities where habit and laziness of thought are common and easy, is a far trickier thing, and very often there’s no tangible reward for it other then your own satisfaction and peace of mind.

SP: The gender portrayal in your novel is fascinating. There are strong women in the novel, including female warriors, and Saam’s team also includes his wife, Maya. Who or what inspired such strong female characters?

OL: I’m glad you liked the female characters—I would like to have even stronger and more complex female characters in my next books. Maya is a noncombatant in the middle of a war between demigods and superhuman creatures. I deliberately made her mortal, since I intended for her to be Saam’s weakness and strength. Her human fragility contrasts with his divine powers, and if he were to lose her I daresay his divinity and immortality would not prevent him from dying of grief and loss of will to live. As for the general female characters, I can’t say there was any specific inspiration. My heroines will, however, probably always have a little air of something from my wife.

SP: You are an accomplished actor as well as novelist and screenwriter. Which of these is your greater passion? In what ways do you see the two (acting and writing) as related?

OL: Acting and writing fulfill two distinct needs in me. I’ve always looked at them as facets of storytelling, which is my central passion. In fact when I act I ‘write’ my character and scene as I do it, and when I write I act out the characters and scenes in my mind. So the two are inextricably linked.

SP: Tell us a bit about your French-Indian identity. What influence does it have on your writing and on your acting?

OL: I grew up in a French family in India and went to an American school, so I’ve had some distinctly different influences. Although I taught myself to speak, read, and write Hindi only after the age of 21, I think in Hindi as well as English and French, and I’m familiar with many different modes of writing in each: Indian mythology, sacred texts, comics, theatre, and films; American and British films, television, theatre, fantasy, comics, and cartoons; French films, television, bandes dessinées (comics), literature, theatre; even Japanese manga and anime. All these have syncretic influences on my writing and acting. In preparing for my role in 3 Idiots, for example, I turned to the French tradition of comédie de moeurse (comedy of manners) to develop the comedy and physicality of my character.

SP: As an action-packed fantasy adventure, Warrior has a lot of transmedia potential. What are your future plans with it? Can we expect this story to be told in other media soon, such as film, graphic novel, or video game?

OL: Warrior has existed as a feature film screenplay for a while, and now as a published novel, and it would, of course, be exciting to see it in other media. I could see it as an animated film, a Japanese anime, a graphic novel, a video game… Right now, however, I’m focused on the novel form. I’ve kept world publishing rights, so I’m working on getting it published in new territories like the US, the UK, and Europe. We’ll have to see how it all develops.

SP: Are you currently working on any other projects?

OL: I’ve just written a new feature film screenplay. It’s the first time I’ve written a film with myself as the main character, and I’m looking for a producer to partner with on the project. It’s a really fun comedy, and could be an international film as well as an Indian film, so the producer could also be international or Indian.

SP: From my own perspective as a writer and producer, I would be very interested in reading it.

What followed next was the arrival of Lafont’s new screenplay in my inbox – which I read within the week. Indeed, it’s a much lighter story and a good read, entirely different in tone and genre than Warrior, demonstrating Lafont’s wide range as a writer along with his ability to write marketable narratives for the screen.

Between modeling in advertisements, acting in films such as 3 Idiots and Babysellers, writing cartoon strips for Men’s Health Magazine, penning comedy screenplays such as Hari Om, and writing novels such as Warrior, Lafont’s range of artistic ability is undoubtedly impressive. Oliver tells me his biggest fear is losing his passion. Yet with his engagement with an array of art forms, his clarity of purpose, and his avid curiosity, it seems that passion is the one thing that Lafont is in no danger of losing anytime soon.

Dr. Summer Pervez has taught in the English Departments of several universities as a specialist in South Asian literature and film. She is also a filmmaker, photographer, and imagist poet who has recently set up her own screenwriting and production business, called Samar Ink Productions.