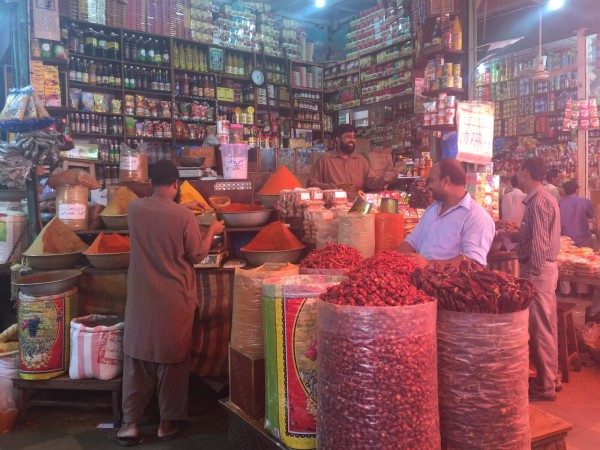 Karachi is for the dreamers and the doers. Eyes scour the streets and roads always searching, always looking for the next muse, the next inspiration. The buildings, exquisite and alluring, beckon the eyes and bewitch the onlooker with things old, new, and blue.

The essence of Karachi lies in the old parts of the city. Here, the streets are narrow and only seem to get thinner as vendors line them, selling delicacies. Smells make the mouth water. The buildings might appear dilapidated, but that’s where true beauty lies. The trained eye notices the carving on the stone, the exuberant colors on the doors, and wrought iron gates that no longer hold the power to keep people away. The stairs have been worn out, a reminder of every single step taken. To some, the area might appear gloomy and dull; however, each old building represents a part of our history pushed aside to make room for other lives.

The old man huddled in a corner shuffling cards awaits his neighborhood friends. They are a family of five making room in an apartment for one, snuggling into one another for warmth in the winter but never far enough away in the summer. Cricketers continue to find places, even in the narrowest of allies, to play the game that has the power to unite all ages. There is a stronger sense of community among the people of the old city. Everyone is informed and welcoming of each other.

Karachi remains quite unexplored for most of the new generation. Those hailing from middle-class and upper-class backgrounds no longer visit places that their parents frequented in youth. For them, such areas are nothing short of foreign, almost alien. The shopping malls that continue to increase in number are new developments. I grew up visiting them, but the old markets of the city are what remain enigmatic to me. My earliest memories are of being a chubby child, clutching onto my mother’s hand as we navigated a maze of shops of cloth and lace and silk; each color more vibrant than the next.

Empress Market, which gets its name from Queen Victoria, the Empress of India, has been present since the late 18th Century. Karachi’s oldest market, situated on a ground where native sepoys were executed following the Indian Uprising of 1857, continues to be a popular shopping destination. The magnificent market lies in the area of Saddar. Standing before the entrance, with its wrought iron gates and dilapidated steps, the building already has more personality than the modern shopping malls that have become a staple of my life. I am shocked at the bustle. Empress Market remains open from the early morning to the wee hours of the evening.

It’s the wafting smell that hits you first, but soon, your nose grows accustomed to all odors. The next thing that you notice is the genuine, smiling faces that urge you with shining eyes and salaams to come and buy from them. This is a side of Karachi that perplexes me. This city has seen its fair share of tragedies, and also, like in any city, residents are always in a hurry. And yet, I can’t help myself from smiling back at them.

This city of mood swings and attitude emanates warmth and solace to me in this market. Or maybe it was the camera in my hand and the prospect of being on television that made the vendors more than happy to comply with my request for conversation.

Vendors and shopkeepers opened up to me like I was a part of their family. One such man had the sweetest smile, and salt and pepper hair. I asked him how long his shop had been there and he replied that it was an heirloom passed down from his grandfather, who initially opened it in 1946. This shop was a part of his inheritance.

I was in awe that the shop had been through so much over the years and I wondered how much had changed since then. He answered that one had to change with the times because the era of his grandfather and father were so different than the one he was living in. There had been times when his own friends had questioned whether it was wise to continue running the shop, especially after the fire that took place four years ago when most shops burned down. But it was his grandfather’s legacy and he had an emotional attachment to it. Leaving was never an option, which is why he renovated and modernized it to the best of his ability, while keeping to its original essence. Business has fortunately picked up since then.

I wouldn’t have minded chatting with him a bit longer but his customers demanded his attention and from their appeals, it seemed he was the MVP of the market.

His answer about keeping the legacy alive stuck with me even after I left the market and continued on with my life. Whenever I look at old buildings, remnants of our history, I wonder why we’ve paid no attention and care to them. They have been demolished to make room for newer, taller, shinier buildings that pale in comparison to their beauty. It’s almost as if we want to erase a part of us that no longer holds significance, a tattoo etched over another tattoo.

Over the years, we have started to lose the historical essence of our city and even our country. Yet, this man who could have tried another endeavor was content to keep his hardworking grandfather’s dream alive. I wish we all had the courage to appreciate our roots and learn from them. Would our ancestors’ hearts break upon seeing us, the next generation, throwing away our inheritance?

Sana Noor is an avid reader, travel enthusiast and writer. Her interests include poetry, history and music. She blogs at?slewnwords.wordpress.com/?and tweets as @Novella_vialli