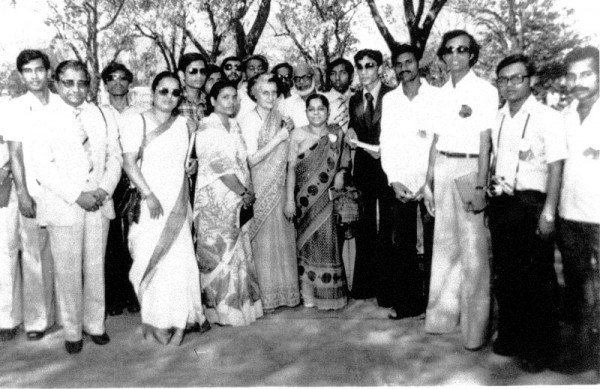 My maternal grandmother, the woman in the sunglasses , and paternal grandfather to her right, on a historical tour with former Indian Prime Minister Indira Gandhi. Gandhi traveled across the world to mobilize support for the Bangladesh Liberation War and raise awareness of the Pakistani atrocities against Bengalis. © Professor Dr. Sirajul Islam, Delhi, India, 1974

Somewhere on the N4 Intercity Highway, between Dhaka and the Brahmaputra River

I had to shut my eyes. Our car was racing against huge diesel trucks, vying for space on the narrow, bumpy road that didn’t even seem to fit the width of two sedans. The prospect of hitting another vehicle in the night’s darkness filled me with fear. Even though I was with my Khalamoni and my Nani, Ammu’s cautionary words from Florida rang in my head: Abbu, don’t go. Are you sure you want to go? You don’t know what the roads are like. It’s not like here.

I hadn’t been worried. I had come to Bangladesh this year after a long gap of seven years, determined to spend time with my ailing grandmother, and I wasn’t going to miss this chance.

But on the intercity road, I saw what my mom meant about the danger. Once we got on the highway, we were constantly overtaken by speed demons, racing to reach their distant destinations before fajr marked another sweltering Ramadan day.

To beat traffic, we left Dhaka for Rajshahi in the middle of the night. Tonight was Laylat-ul-Qadr, the Night of Power, believed to be the holiest night of Ramadan. Millions of Muslims stay up all night, hoping their prayers are heard. Namaz porthe porthe jabo, Khalamoni assured us before our trip. After a few hours of expertly snaking through the roads, we found a decent, well-lit truck stop where we could park and eat our sehri before another day of fasting began at sunrise.

Nani’s nurse doled out the food. She handed me a roti, a banana, and some curried vegetables and meat that we had gotten from the Dhaka hotel restaurant. Throngs of truckers, travelers, and passersby were awaiting food at the tiny rest stop food stand. Only one more hour till dawn would break.

Khalamoni walked over from her car, checking on me several times. “You have everything? Need any more food? Ar akta kola nao,” she encouraged, handing me the banana. Khalamoni’s generous nature explained why she dropped her American life three years prior and moved to Bangladesh: she served as Nani’s primary caretaker. During that time, Nani’s health continued to worsen, requiring constant vigilance, support, and treatment. Although much of the family knew that Nani’s days were numbered, we couldn’t have expected that both Nani and Khalamoni would be gone shortly after this night.

The night before our departure from Dhaka, I was in the hotel room that Khalamoni had booked for Nani and herself. The hotel was clean and polished, located in the wealthier Dhaka neighborhood of Gulshan. They had just returned from a whirlwind medical tour in South India. Alhough Rajshahi is close to the Indian border, there is no direct, easy route from Chennai to Rajshahi. Thus, they stopped in Dhaka for a few nights before making the final leg of the journey home in advance of Eid al-Fitr, marking the end of Ramadan. Khalamoni, with one hand tending to her daughter Sanaa and the other tending to Nani, was the conductor of this grand operation.

I saw Nani for the first time in four years and noticed how much her health had deteriorated, her dialysis treatments chasing her like an unwanted suitor. Is she going to make it? I wondered. I remembered the last time I saw her, in the summer of 2009, when Nani made the epic journey from Bangladesh to the United States by herself to attend my college graduation. As a learned professor of political psychology, she held education in higher regard than anyone else in my family.

“This is the last time I’m coming to America,” she had assured us in her deep, assertive voice.

Sitting in our hotel room and considering our travel options to Rajshahi, we learned that the trains and planes were booked up in the pre-Eid exodus back to the gram. Our only option, Khalamoni told me, would be to rent a car and make the overnight journey back to Rajshahi by road. When concerned family members asked Nani, “Why don’t you spend Eid here in Dhaka? It’ll be easier and less hectic,” Nani firmly replied, “No, I want to go home.”

Before our nighttime departure, Choto Fupi dropped off homemade food for us to enjoy before fasting would begin again the next day.

“Finally, some good food!” Nani exclaimed, as she heartily ate the bhath, dal, and shrimp jalfrezi. Her short haircut—remnant of a prior battle with breast cancer—further accented her no-nonsense, professorial aura. “The food in Chennai is so bland, no taste at all.”

After packing the remainder of the food in tin containers for our morning sehri, we began our overnight journey. I was looking forward to the change of scenery from the unbearable Dhaka congestion.

As Nani sat in the car with me, the engine humming quietly along the nighttime road, I asked about her life. I knew my family was involved somehow in the Bangladeshi Independence Movement leading up to 1971, and that they had connections to the key leaders of the time. I asked Nani if she knew Sheikh Mujib Rahman, the founding father of Bangladesh.

“He was a very respectable, kind man,” she began. As a professor whose work centered on political movements in South Asia, she must have had an ocean of knowledge about a topic that would drown me if I dived in too quickly. I later learned that when she was around my age, Nani was a political organizer while Bangladesh was East Pakistan. Ammu had told me that Nani was targeted as an intellectual, and fled with her whole family to her mom’s house in the gram for nine months of hiding, until Bangladesh’s independence was officially secured with India’s support. My Nani was only twenty-five then, a woman—and not even a full professor yet.

While West Pakistan controlled Bangladesh, all visible manifestations of culture and nationalism were suppressed. The suppression became more and more violent over time, as intellectuals actively urged Bengalis to be proud of their own culture and heritage and to resist Pakistani control. Nearly 1,000 academics, journalists, physicians, lawyers, writers, artists, and engineers were murdered, and my Nani and Dada were two of few who escaped this systematic slaughter.

Sheikh Mujibur Rahman made a speech in New Delhi after being held in prison during those nine months of terror: “The journey is a journey from darkness to light, from captivity to freedom, from desolation to hope. . . In those nine months my people have traversed centuries” (Payne 140). Before that speech, exclaiming “Joi Bangla” in front of the wrong people could get you shot, but now the Bengalis were free to shout it proudly. The desh where so much blood soaked the soil and flowed into the rivers is the same place to which my Nani and Khalamoni chose to return.

Our conversation turned to Nani’s academic career, her transition from philosophy to psychology, and then silence gained a larger presence as dawn approached. While I looked out the window, a familiar feeling set in as we entered Rajshahi’s town limits. The city felt more open than Dhaka: the skies were blue, the pastures green, and cows and livestock grazed. A peaceful optimism wafted in the air, in contrast to the chaotic struggle amongst hordes of people and rickshaws on every corner you turn in Dhaka. I felt rejuvenated on this Eid trip to Nani’s and Khalamoni’s home, the last Eid I would ultimately spend with either of them.

As I prostrated in Jummah prayer, my uncontrolled tears soaking the carpet, I prayed for Nani’s soul and a safe journey for Khalamoni. I was in Jerusalem as part of a peace delegation to Palestine and Israel, and I found myself at a mosque considered the third holiest site in Islam. Beneath the beautiful stained-glass windows and vaulted ceiling, I participated in the religious rite I turn to most when I’m grieving or remembering loss.

Less than a year before this prayer, Nani passed away peacefully in her own bed. She could tell the end was coming soon. Khalamoni recounted to us how after her night prayers, she bathed and dressed in a nice sari to go to bed. She never awoke after that.

Not even a month after Nani’s passing, my Khalamoni was diagnosed with liver cancer, which she battled for nearly eight months before doctors concluded palliative care was the only option left. Once she knew, she, too, made preparations for the end. As I flew to Tel Aviv, she was on a flight to Bangladesh, where she wanted to die. Doctors warned us of the risks involved with traveling in her frail condition, but she was adamant.

I could not control any outcome, so I prayed for her. The day before I left Palestine, my mom called to tell me that Khalamoni passed on peacefully in Rajshahi. An overwhelming feeling of sadness filled me, but I also felt resolved that several journeys had concluded at that moment, leaving me the stories that I would remember of my courageous Nani and Khalamoni.

Nabill Idrisi is a Bangladeshi-American writer, educator, and life coach. Currently based in New York City, he is exploring intersections of family memories with historical events surrounding 1971 Bangladesh.