Nothing matters, he said; an extravagant claim
That slow Sunday. A quick kiss later

Prints and used pillows. His new lover was pregnant
From Tunis. They had sex in Tibet

Months ago. I wanted to tell you before, he wrote
But that would have been too soon, too late

If nothing mattered, then this would pass
No dogma to distrust, no damsel in distress 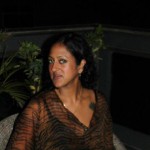 Shobita Mampilly teaches Anatomy and Physiology to high school seniors in the Bronx. Floating continents often, poetry is her chosen vehicle to detoxify. She performed in Anita Nair’s A Twist of Lime, staged at Jagriti Theater in Bangalore. Armed with graduate degrees from Columbia and New School universities, Shobita relies on yoga to navigate her cosmos. She has published Malayalam poetry translations, and her own work has appeared in journals like Rattapallax and Lips Poetry Magazine.