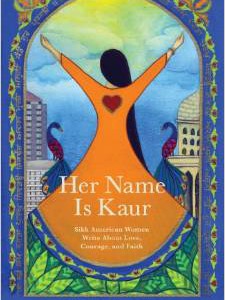 Edited by Meeta Kaur, a talented and passionate writer herself, this anthology is a pleasant and refreshing surprise. I found myself captivated, moved, and inspired by the wide-ranging essays written by young Sikh-American women. While they are all bound by the common threads of Kaur, Sikhi, and a profound faith in Waheguru, their distinct personalities come through loud and clear in their respective narratives.

From finding romantic love and muddling through the typical challenges of growing up Indian-American in a strictly American milieu, to the graceful acceptance of one’s own faith as well as fate, the contributions traverse a broad spectrum of the immigrant experience. Every essay is each young woman’s intensely personal spiritual journey, expressed with genuineness and sincerity. A couple of the stories seemed to drag a little at times, but the crisp prose and the sensitivity with which the subject is handled compensate for this minor drawback. Each author is a proficient storyteller, hence the collection reads more like fiction, replete with entertaining tales rich in cultural detail. Some stories are laced with wry, self-deprecating humor, and others are fraught with angst and heartbreak.

Two major events, the 1984 Golden Temple attack and the 2012 shooting at the gurudwara in Oak Creek, Wisconsin, appear to loom large in some of the stories, and even seem to have shaped the life philosophies of one or two of the writers. Harleen Kaur (“Moving On Forward”) was apparently close to one of the Oak Creek victims, and her story about the loss of her “Satwant Uncle,” who is described as a benevolent hero, is heartrending.

Another storyteller I could closely relate to was Sonam Bhimbra (“Gone with the Pind”), the bold, slightly rebellious girl who grew up in a Southern state and attended an all-white school. The devastation her family suffers when her gentle and dedicated doctor father is arrested and humiliated touches readers at the core. Ultimately, it is her mother’s courage and undying faith combined with her father’s strength in the face of adversity that keep the family together. In every one of these accounts, it is the family and its faith that play vital roles in the author’s life.

To some of us first- and second-generation immigrants cocooned in our cozy arranged marriages and conventional careers, this collection of stories is a bleak reminder of the deep heartbreak experienced by others less fortunate: lost love, untimely death in the family, financial disaster, gays and lesbians grappling with their sexual identity, and most of all, surviving the horrors of discrimination. Yet many of these brave individuals have managed to live their lives in America with grace, forgiveness, and a generosity of spirit. This spirit of Sikhi and the women who have wholeheartedly embraced it is the recurring theme of the book.

Overall, Her Name is Kaur is both entertaining and educational. Meeta Kaur has done a fine job of collecting and editing the autobiographical gems within. I would have liked, however, to read a few stories by first-generation Sikh immigrant women about their experiences as well as their challenges raising families in another culture, dealing with their adult children’s marriages, divorces, births of grandchildren, and other social issues. Perhaps Meeta Kaur will make that a future literary project.

Shobhan Bantwal is the author of six novels and co-author of two anthologies. Her articles have appeared in The Writer, Romantic Times, India Abroad, Little India, New Woman, and India Currents. Her short stories have won honours/awards in contests sponsored by Writer’s Digest and New York Stories, and New Woman magazines. Two of her novels have won The Golden Leaf and National Indie Excellence Awards. Visit her at www.shobhanbantwal.com or on Facebook.