Geography of Tongues by Shikha Malaviya 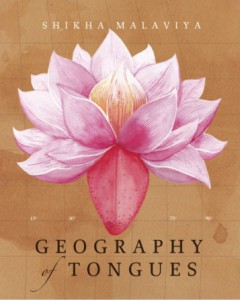 Geography of Tongues, Shikha Malaviya’s first book, is a collection of poems that awakens the reader’s sense of taste, offering poems about pineapple pastry, mashed bananas and milk, guava leaves, red chilis and pomegranates, strawberries and mangoes. Her words are fruity, peppery, spicy, tangy, salty—a million licking tongues. Geography of Tongues is a magical read, with a bittersweet longing for home and familial love woven throughout.

Those who have been to India know what a contradictory experience it can be. Opulence and poverty live side by side. There is extreme tolerance and equally extreme intolerance. There is both feasting and fasting. Malaviya revels in juxtapositions of this sort. For example, in the poem “Pineapple Pastry Flashback,” she writes,

Malaviya expands on the idea of “tongue”; for her, conversation somersaults between languages and continents. In “A Rapid Tongue Thing Going,” the speaker of the poem talks back to her daughter’s pediatrician:

The tongue that you call rapid has a thousand fires in it and a thousand showers of lotuses. Perhaps we do speak as if we have to catch a train . . . A rapid tongue can trace the world in one lick with the force of a Ghost Chili kick.

The collection as a whole is filled with humor. For Malaviya, humor seems to be the antidote to the trials and tribulations of being both from India and apart from it. Part I of the book deals with Malaviya, who was born in the UK, experiencing India with new eyes: visiting “home” to see her grandparents, grappling with learning Hindi, attempting to understand the place she is from and simultaneously an outsider.

Her imagery is crisp; the concrete images in “Lingua Franca” transport the reader to Hindi alphabet books from childhood:

Like many poets from the subcontinent, Malaviya addresses issues like poverty and injustice. She plays observer and empathizes with the sorry plight of daily wage laborers, the paradoxical anonymity and omnipresence of beggars, the disturbed polity in Kashmir, and the unfading horror of the anti-Sikh riots, making the reader acutely aware that most of us remain outsiders to many situations that crop up in the news.

Denial has been dealt with interestingly, not so much as a qualm as one would expect but as a necessary evil. One may love one’s country, but at the same time, one must play pretend a lot. For example, in “1984,” one of the most ambitious poems in the collection, Malaviya describes the year of the Indira Gandhi assassination and the anti-Sikh riots from the point of view of her teenage self:

Thirteen and riding with feelings like the whir of a motorcycle, without a helmet on. I thought I was living dangerously. I stood on the balcony so the boys could see me.

Later in the poem, the descriptions of children playing street cricket, tequila shots, and the Indian mask of goodness are ways of dealing with the darkness that violence brings; in fact, these seem to be the only way to bring a sense of normalcy to an otherwise horrific situation. The large events of that year are given equal treatment with the small, the personal, even the mundane, resulting in a new, shimmering narrative of a historical event.

Geography of Tongues is an accessible book, combining innocence with humor, a touch of Gulzar love and Bollywood song. A poem called “India calling” begins,

Go you, go you
fly you bird
lands outside
go you
here what is
my love?

These lines are in fact a loose and literal translation from a Hindi song. There is a sweet playfulness to the disruption in syntax, which has not been reframed into English syntax. Malaviya uses Hindi song lyrics to embellish poetry the way an Indian homemaker adds red chilis to curry. The language of India never goes away, Malaviya seems to say, whether you travel to the UK, Minnesota, or the Coliseum in Rome.

In Part III, Malaviya visits and revisits other geographies. She enters the realm of prose poetry, and once again with humor and flippancy, she explores the problems of being multilingual and “steals Matisse’s paintbrush” to understand the lingo of a painting. The book comes full circle with “Silver Bangles,” where the poet paints the geography of her life from the UK to Uttar Pradesh to the prosaic dilemmas of adolescence in the US, and at the end, arrives in India to the jingle of silver bangles.

Geography of Tongues has a lilt of joy that is rare in poetry today. This is a book one must taste and digest with much relish.

Neelima Vinod writes fiction and poetry. She acquired her M.Phil in English literature and has worked as editor, teacher, and writer. Her debut e-book Unsettled (Indireads) is an effort to bridge the gap between fiction and poetry. Her work has appeared or is forthcoming in The Unsettled Winter (Raedleaf Poetry anthology), the Brown Boat, Urban Confustions Journal, eFiction India, Thresholds’ short story forum, Dhvani, and others. She has reviewed books for the New Indian Express. She lives in Bangalore, India. neelthemuse.wordpress.com