When I was approached to write a piece on South Asian food for this magazine, I jumped at the chance to understand more about a cuisine I’m intrigued by and don’t know enough about. I am a pasty, pasty white person who loves spice and who likes to step out of my bubble of inherited and developed likes and dislikes. It was when I began that I realized not only did I not know enough about South Asian food, I knew barely anything at all. This was a cooking journey that needed to begin with some self-education.

Being from Vancouver, I’ve tried South Asian cuisine in fusion form because Vancouver is the First Lady of fusion food cities. However, I don’t recall ever having a traditionally prepared South Asian dish, let alone preparing one myself. I hoped with the available resources I would be able to meet the challenge. So, to Google.

This is where I encountered my first set of difficulties. Firstly, no two websites contained the same information on the region, and secondly, there is the inherent difficulty in defining regional cooking at all. A search for “South Asian cuisine” comes back with a lot of results for Southeast Asian, which is a very different thing. Lots of sites will lump together a bunch of cuisines and call it “Asian food” or worse, the wince-inducing “Oriental food.” Getting accurate, nuanced information takes some time and effort, and I realized that people who don’t have the time or inclination to do a deep dive might get misleading information, thanks to search engine efficiency and the urge to amalgamate. At best, it will muddy the waters; at worst, it could breed ignorance and assumption, those tricky twins that sometimes accompany misunderstanding.

Adding to the confusion, it seems that each person has a different take on what makes a cuisine authentically regional. At first I found this irritating because I craved one definitive answer, but the more I sat with it, the more I found it interesting. We form ideas around our personal experiences, so one person’s heavy dose of spice is another’s bland fare. When you take into account material circumstances like scarcity versus abundance or a million other factors, you get a million differing definitions. That said, there are non-limiting generalities and guidelines to the cuisine.

The areas we are talking about when we refer to the region of “South Asia” are: India (North Indian, South Indian), Pakistan, Bangladesh, Sri Lanka, and Nepal. Each is very distinct in flavor. Notwithstanding the diversity in each area, some generalities can be made: North Indian food consists of unleavened—or flat—breads, milder curries, lots of vegetables, and chutneys. South Indian cuisine includes many rice dishes flavored with coconut, chilis, curry leaves, and fenugreek. Pakistan has Afghan-Turkish-Iranian roots and includes meat, vegetables, beans, and lentils. Bangladeshi cuisine relies heavily on rice, legume crops, and seafood with healthy doses of garlic, ginger, coriander, turmeric, and chili. Sri Lanka’s staples are rice and curry in white, red, and black varieties, flavored with dried fish and served alongside chutneys. In Nepal, ginger, garlic, coriander, pepper, cumin, chili, cilantro, and mustard, as well as ghee and yak butter, are used in dal and curried vegetables alongside rice and may include chicken or mutton. 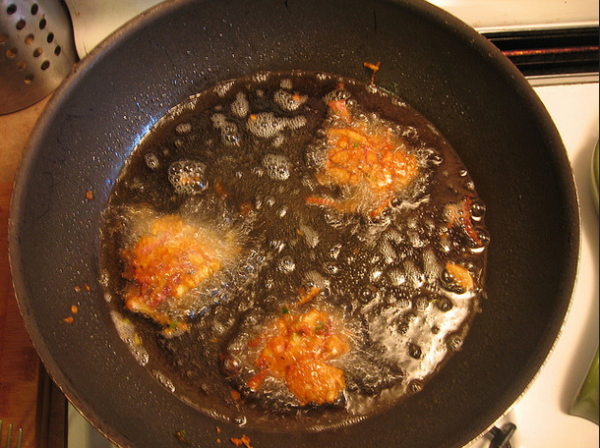 There are certain parts of cuisine that need to be seen to really be understood: a texture, a thickness, a blending technique. Proper documentation is always appreciated and valuable, but the worth of a live demonstration is immeasurable, and I found this in a surprising place: YouTube. I decided to start with a Bengali dish, and I had two criteria: it must be representative, and it must be something I want to eat. I found exactly what I was looking for in the form of a recipe for piaju, a Bangladeshi onion-and-lentil fritter that has mouth-watering ingredients and, best of all, is fried in oil (I have a deep fondness for fried food). I found a video demonstration on YouTube, and the woman who made them was much braver than me, mixing the raw chilis, seeds and all, into the mixture by hand, which I have learned from experience leaves my wimpy little hands burning hot and requires me to sit with them in a container of cold plain yogurt all night to draw the heat out. Such is life.

I did not have any trouble finding all the ingredients I needed, except one: black salt (kala namak). Its description sounds wonderful, and I want some. If you find it, grab it. Although it was not called for in the recipes that I found for piaju, I craved something to dip them into, so I made a simple mint chutney to go alongside.

I read and watched recipes for piaju, and some called for soaking the lentils in warm water overnight, while others said only thirty minutes. I split the difference and went for about four hours. The lentils will soak up some of the water, so keep an eye on them for the first half hour, and top up if necessary.

Once the lentils are soft, pulse them in a blender to get them to a smooth, muddy texture. DO NOT add water to the mixture to help it along, as this will make the fritters harder to form later on.

Empty the lentil mixture into a bowl. Add salt, turmeric, rice/chickpea flour, chilis, cilantro leaves, and baking powder. Mix thoroughly. Add onion and ginger last, and mix together. Form patties by picking up 1–2 tablespoons of mixture and making it into a flattened patty with your finger.

Heat oil to medium/hot temperature and drop the fritters in one by one. Fry until golden-brown on each side, flipping once. Remove with a spider or slotted spoon and place on a paper towel to blot excess oil. Serve over rice or alongside chutney.

For the chutney, place all ingredients in the bowl of a food processor and chop finely. If you would like to add a bit of heat, add 1–2 green chilis, but since the fritters themselves would be spicy, I decided to skip them and make the chutney nice and cool.

I had an idea they would be good, but I had no idea how good. The pureed lentils are filling, so only a few piaju are needed to satisfy your hunger. The baking powder makes a huge difference in terms of how they puff up in the oil, resulting in light, fluffy batter that still manages to be dense enough. Fresh ginger, onions, and cilantro take on crispy edges with a satisfying crunch.

This is also a recipe that will take a lot of time, which I love. It would be a fantastic recipe to make with friends or family, because the actual process is most of the fun. Working on something together and then getting to eat it is the sort of labor I enjoy.

So if you haven’t yet tried Bangladeshi cuisine, I recommend this as a simple, elegant, and delicious way to start.

Jessica Hardy is a Vancouver-based food and culture writer. Her work has appeared in BCliving.ca, Montecristo magazine, the Vancouver Observer and Vancouver Slop, as well as her own blog, Crass Cuisine. She has been featured in the Wall Street Journal, the New York Times blog and on CBC Radio One. She subsists mostly on red velvet cake, Stanley Park, and interesting dinner guests.