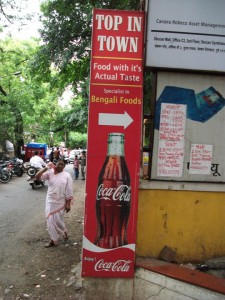 So you’ve scarfed cheesy gorditas
at Taco Bell, but no greasy
papads at a roadside dhaaba?
Never watched Barrister Vinod
or serials on Doordarshan?

So you’ve never used IST,
or Indian Stretchable Time,
as genuinely plausible
excuse for your perpetual
lateness or said za as a kid—

with fear of losing a rupee
to such crazy degree they’d suck
ghee from a just alighted flea.
And if your mobile lost charge,
you’d burn for an STD booth.

for an epic confrontation
with a sad power pakora
bladu bore of a co-worker
wagging her thumb shame shame puppy
shame over a missing cool drink,

like Thumbs Up, Limca or Mango
Maaza, from the call center fridge.
A tale to mockingly relate
to your chaddi buddies, your boys
from childhood. Your bros. Your bum chums.

Or say the alphabet with me.
Say A-B-C-D-E-F-G-
H-I-J, for American
Born Confused Desi Escaped From
Gujarat Hiding In Jersey.

You don’t have to be Indian
to be Indian, just possess
a sense of Hindu rate of growth:
the economy clamoring
along at 3.5%

while the population splutters
at nearly 25%
during much of the latter half
of the 20th century.
Forget the Raj. The crisps-loving

* Pankti (associated with food and the god of rain) is a Vedic meter found in one of the later books (Book V) of the Rig Vida. Also known as the fifth horse pulling the golden chariot of the sun god, the meter is said to be derived from bone marrow. The pankti meter is stanzaic with 40 syllables, written in any number of quintains, five padas, or feet of eight syllables. 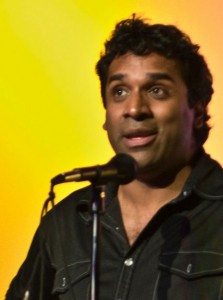 Ravi Shankar is the founding editor and executive director of the online arts journal Drunken Boat. He is the author of the 2010 National Poetry Review Prize winner, Deepening Groove, and Instrumentality, the 2005 finalist for the Connecticut Book Awards, and he co-edited W.W. Norton’s Language for a New Century: Contemporary Poetry from Asia, the Middle East and Beyond. He has won a Pushcart Prize; been featured in the New York Times, the San Francisco Chronicle, and the Chronicle of Higher Education; and received fellowships from the MacDowell Colony, the Blue Mountain Center, the Djerassi Resident Artist program, the Ragdale Foundation, and the Connecticut Commission on the Arts. He is currently chairman of the Connecticut Young Writers Trust, on the faculty of the MFA program at City University of Hong Kong, and an associate professor of English at Central Connecticut State University.