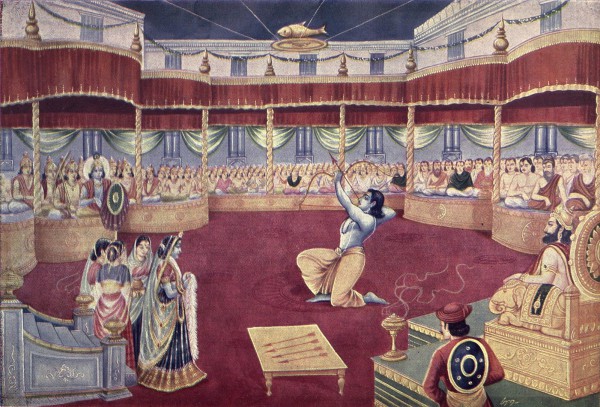 1996 was a big year.
I was living in a small town in Ohio
so white the snow
didn’t bother to fall come winter,
but it was the nineties
I was a five-year-old brown girl
I had a closet full of neon leggings
big glasses
and the comic books to match.

I first read the Mahabharat,
the longest ancient Hindu epic ever
in a comic book.

In the version I got,
All the gods were white people.
All the bad guys were Muslim.
All the women were helpless.
The rest of us were blue
like darkness doesn’t have its own ink yet,
like India was printed as one big colonial afterimage.

Her name was Draupadi.
In real life, she wasn’t blue like in the comics,
she was dark as soot,
probably darker.
She appears when we’re not looking
like
her parents only wanted a boy to do all the fighting,
as tends to be the case
and he steps out of the fire sacrifice
fully dressed in battle gear,
white like hot fire and violently masculine
then suddenly from the ashy remains
here comes Draupadi so dark
reflectance never had a chance.
They say
she was invisible in the night
with eyes like lotus leaves
and hips to match.

Draupadi has always pissed me off.
See the way I figured when you are at the heart
of all the violent destiny
unfolding in your universe
you can do something more than letting it happen.

When I started taking testosterone,
I had nightmares about all the angry men in my life,
all the tears of my many, many mothers,
all the ways they are afraid,
all the ways I should attempt to find some rest
in my body.
And I am always dressed in my battle gear,
what I mean when I say
I am always dressed to kill.
My narrative white like hot fire, and violently masculine.

I remember how Draupadi was won,
an arrow in a live fish,
anxious beating heart
contracted until the opening
one shot piercing willing muscle.
And then there is a gutted fish
and a warrior dynasty flaring all over the ceiling.
Four millennia later,
Michelangelo
would paint the Sistine chapel red—arrow and fish
becoming Adam and god
the holy reinvention of manhood
proving itself on contact.

I remember how Draupadi was lost,
how the oldest of her five husbands
threw his dice
and gambled his kingdom away
then himself
and finally as a last ditch
risked his wife because
some of us have those high stakes bodies.

When Draupadi’s new captors tugged at her clothing,
I remember her soft praying hands,
the gods letting her sari stretch infinite
not like magic like resistance:
the boundless, uncontainable suffering of a dark queen.

Draupadi,
What if instead of contemplating the contexts of each of our fates?
What if we both got lifted?
What if we didn’t give a fuck?
What if we weren’t building from the ashes of all this burning manhood?
What if we got ourselves a spaceship and got naked in the dark?
What would it mean to be darkness and get naked?

What if we flew to the part of the cosmos
where gravity is only a suggestion,
where we are both something like refusal
flashes of pink in a black whole.

Draupadi, what if darkness could just love itself?
What if we
stayed together as five-year-old brown girls
huddled in the Andromeda Cluster
refusing all the blue lies
we’ve been told about attractive forces,
pressing our own inked bodies
into the cosmic books. 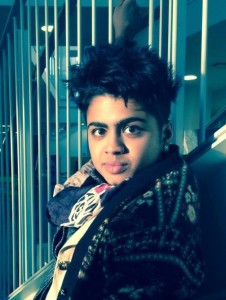 Janani Balasubramanian is a South Asian literary and performance artist based in Brooklyn. Their work deals broadly with themes of empire, desire, microflora, ancestry, apocalypse, and the Future. Janani is one-half of the spoken word duo DarkMatter and a writer at Black Girl Dangerous, an online forum for QTPOC. They’re also an organizer at the Queer Detainee Empowerment Project, which serves queer, trans*, and HIV+ detainees and their families in New York. Janani’s currently working on their first sci-fi novel, H. queerdarkenergy.com