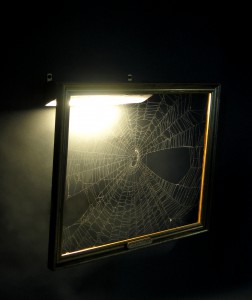 Inside the asylum where my thaththa works—his first job in this country—there are cocoons and casings hanging from the ceilings but few moths and no butterflies. Some cocoons are delicate, like cotton balls; others look as if made from papier-mâché. A chrysalis dangles, its nacre surface hard and iridescent. They all hum and vibrate; none speak. The presence of so many cocoons but no butterflies or moths perplexes my father. It has an unsettling effect, like being continually surrounded by pregnancies but never hearing an infant’s cry.

My thaththa conducts a neurological exam on his newest patient, the cricket. Antennae quiver as thaththa speaks. He asks the cricket to explain the meaning of the following expression: he kicked the bucket. But this is a female cricket, thaththa notes in the patient’s records, and as such doesn’t have a voice. The sun streaming through the window etiolates the surfaces of the table and exposes the wads of bubble gum stuck underneath. My father experiences nausea at the thought of who might have chewed that gum—is it even gum? Perhaps it is frass?—and a bitter after-burn at the back of his throat. He wonders if the cricket notices the smell of camphor—the mothballs the orderlies have strewn in the hospital corridors the night before.

He thinks of quipping, This isn’t cricket, cricket, then reconsiders. The American wouldn’t get the Subcontinental joke.

The next day, outside the examination room, a commotion. Thaththa finds orderlies cutting down the case of a bagworm moth. This case is surprisingly beautiful—made from elderberry bark and pine needles that shimmer wet with mist. It is not suppurating or exuding noxious fumes to ward off predators. The corridor smells as if he is standing in the middle of a small forest instead of next to the hospital cafeteria. My father stops the orderlies, tells them to leave it, and they don’t resist. It is a small victory for the immigrant doctor though perhaps it won’t matter because tomorrow my thaththa will have moved on, and the orderlies will do with the cocoon what they want. Thaththa returns to the examination room and writes in his patient’s chart: It can never be satisfied, the mind, never.

What am I working on?
I’m working on something
that will change the world,
and human life as we know it.
You don’t have to understand
things for them to be.
Bites kill you. The fever burns you.
One scientific mishap, and hours later
I’m sewing a costume. Even a man
who is pure in heart
and says his prayers by night can be
transformed in his bed
into an enormous vermin.
Nothing in your Christian world will help.
Not prayers, not holy water.
Not the weight of a
thousand of your churches.
Because, they are mad; they are fools,
said the Dog-man,
but their senses were the same as before,
and they remembered everything.

I hated the way they all felt sorry for me.
All they could see was that I was
not what I used to be. Once I falsely hoped
to meet the beings
who, pardoning my outward form,
would want to go full time
into the super-hero business,
but someone in this camp ain’t who
he appears to be. Need
I remind you that we
are the evil mutants?
I hope this dream
or whatever it is goes away.
I think it’s bullshit.

In the lobby, my thaththa tries to stop the orderlies from crushing the Luna moth with their nets. There’s a powder on the wings. If you disturb that, she won’t be able to fly. The orderlies chide thaththa for believing in fairy dust. A nurse takes my father’s side. She explains my father is half right: butterfly wings aren’t covered in dust but in chitin, in scales, and if the scales are destroyed the butterfly can’t use its wings. The orderlies still refuse to believe. You’re telling me the thing’s a lizard not an insect? The Luna moth shudders and moans. Its thorax curves as if bowed by a great weight. See what you’ve done. But the orderlies are not there to pity the creatures. This is a job, and they want to do it well. The Luna moth scuttles away, her wings trailing like coattails. As my thaththa watches, he thinks, we are so afraid of being rendered voiceless, mouths sewn shut, so that we must resort to grunts; yet, what does it matter, giving ourselves a voice, when it helps us understand so little.

* Section iv consists of found lines. These are the sources: The Fly, A Wrinkle in Time, The Walking Dead, Spider Man (comic), The Werewolf of London, The Metamorphosis, Manitou, The Island of Dr. Moreau, The Odyssey, Frankenstein, Animorphs, X-Men, The Thing, Birdy. 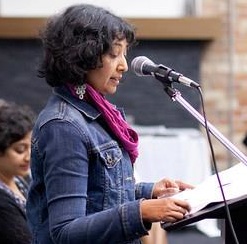 Hasanthika Sirisena’s stories have appeared in Glimmer Train, Epoch, StoryQuarterly, Narrative, and other magazines. She is a recipient of fellowships from the MacDowell Colony and Yaddo. In 2008 she received a Rona Jaffe Writers’ Award. She currently teaches writing at the City College of New York.