The Summer of Young Uncles 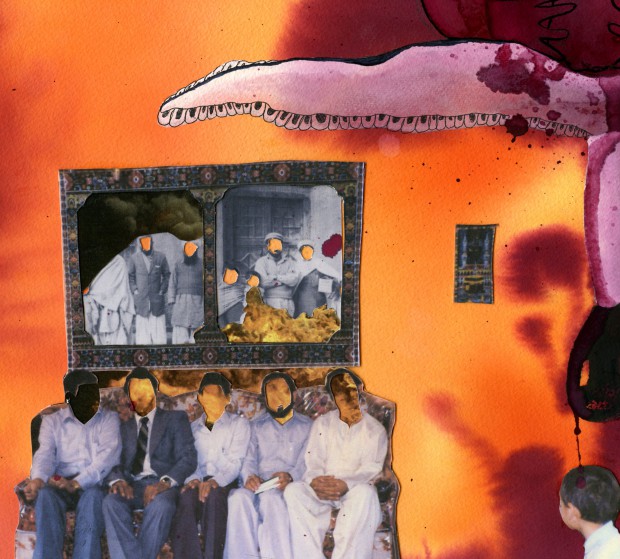 It was the summer of young uncles. Somewhere in some office in Pakistan, the go ahead was given. Or maybe somewhere in some office, someone who didn’t follow the rules, or only followed the rules of his wallet, was given a promotion so in villages all over Pakistan, young boys who had been surly teenagers kicking crows on dirt roads had turned into men. Moustaches burst onto their faces. Heads burst out of the ceilings of their houses. Enough airmail letters crisscrossed the Atlantic. Enough mothers and wives were consulted or told. Feelings of happiness and concern passed through their faces. Permission was given or not given and young Pakistani men flooded the streets of Corona.

That summer, all of Saima’s uncles began appearing. They were like those Russian nesting dolls made out of the same mold: some with red moustaches, some with brown, some short, some skinny, some fat, but they all had the same look. They were Pathans: white skin, handlebar moustaches, and like all Pathans, they carried their sex around with them like wild cats. A few paired up with overweight Dominican and Italian women who had been in the country longer. The uncles needed green cards, and they needed them fast.

I would see a handsome uncle, a man who looked like he could live in the pages of a magazine, and he would be with a woman as large and beautiful as an air balloon. She’d bend down and say, “Oh she’s so cute.” I’d pull away. I wasn’t used to that kind of adult attention. When I’d see the uncles with their ladies coming, I’d run and hide.

I felt guilty, even back then. I knew something wrong was going on. These women loved the Pakistani uncles. They bought them new clothes, sunglasses, and shoes. In exchange, the uncles walked with them down the street, their eyes wandering to all the younger girls who were off limits. Next to their beds were picture frames of the women they had married or were supposed to be marrying back in Pakistan.

Saima’s most handsome uncle, Azim, got a job at my father’s Gosht Dukan. My father owned a butcher shop called Corona Halal Meats. It was on the corner of 99th and National Street. Before it was a Halal meat store, it had been an Italian butcher shop, and even though my father didn’t hang sausages and pigs’ heads out front, the meaning was the same. Dead animals arrived there to be cut, sold, and eaten.

It was fine real estate for religion on National Street. The Jehovah’s Witness, an Episcopalian church, and our masjid were crammed next to each other, wall to wall, skin to skin. And, if you crossed the street, there was a Catholic store selling crucifixes and paintings of women and men in hell burning. The sinners looked like all of us, but I always thought all of us in our agony looked like Jesus.

It was only right then that there should be a place for animal sacrifice as well. There could have been people slaughtering goats on that very spot for centuries. Men might have gathered, talked, and joked, the smell of blood and flesh making their jokes funnier, just like it did in the Gosht Dukan.

My mother always gave me tea to take to the store around four o’clock. It was one of my favorite things to do because I loved visiting my father. In this country, with so few people to love, he’d showered me with affection until even my mother and neighbors said I would get spoiled.

On the front door of the Gosht Dukan there was a dirty sign that said OPEN and another that said OUT FOR PRAYER. A bell rang when I entered. My father looked up and smiled a smile as large as an onion rack. He was standing at the back by the register with Yaqeen Uncle and Azim. Yaqeen Uncle worked as a mechanic in the gas station across the street. He always came at this time because he knew he would get free tea. He was sitting in one of the collapsible chairs my father had especially for him.

“Shafiq Saab!” Yaqeen Uncle tossed a bag of pistachios at my father. It landed on the counter. I knew he wasn’t going to pay for it. Azim looked to see if it was okay, but my father didn’t hesitate. He opened the pistachios and passed the bag to Yaqeen Uncle. Azim brought out a plate. My father took the kettle from me, and Azim pulled a bag of Styrofoam cups from the shelf. My father poured full cups for Yaqeen Uncle and then Azim. There was only half a cup left for my father at the end. Only I noticed this. The uncles didn’t.

Yaqeen Uncle started on one of his favorite subjects: Comparative Religion. “The Yuhovah’s Witnesses came to the Garage!” Bits of pistachio fell out of his mouth. Some of the shells missed and fell to the floor.

Azim got out the broom to sweep them up. “Why are they called that? Did they witness something?”

My father laughed. He brought out the sugar, a half-pound bag torn open at the top. It had a hot-pink label and a plastic spoon with tea-soaked sugar crusted along the edge. Then he reached under the counter and brought out a pamphlet that said “Awake!”

“They gave it to me when they came to the Gosht Dukan. I tried to give them my Quran, but they wouldn’t take it.”

Azim and Yaqeen Uncle started laughing. I giggled, too. I was usually quiet around the uncles, happy just to be near my father, a little planet circling about. But this time I said, “They don’t celebrate Christmas.” My father looked over at me and smiled.

Yaqeen Uncle grabbed the spoon and loaded his cup full of sugar, then took a loud slurp from his chai. “This Christmas, I finally understand, but Easter—”

“I know Easter,” my father said. “Easter is when Jesus goes upstate.”

We all looked at him. My father’s English was sometimes a little confused.

My father pointed his chai cup in the air. “Upstairs, upstairs.”

“Upstairs, acha,” and they both started laughing.

Azim, who had only been in the country for a few months, looked at them, then asked in all seriousness, “But what do eggs have to do with it?”

They were all laughing so hard, they didn’t hear the door chime and Hafiz Saab walk in. My father looked up, and everyone quieted down and said salaam.

Hafiz Saab was our imam. Before he came, we children would run wild on the streets, but after, we were rounded up and sent to the basement of the masjid to learn Quran. Hafiz Saab had just come from Pakistan, but he might as well have come from a different planet, he was so strange to us. But to our parents, looking at him reminded them of home. The men would slap him on the back and follow him around like lost puppies, and the women would hide behind doors and giggle whenever he passed.

“Here’s Hafiz Saab. Ask him.” Yaqeen Uncle got up from his chair and offered it.

Azim, who hadn’t touched his chai yet, handed his over. “Hafiz Saab, what is it that the Yuhovahs witness?”

Hafiz Saab’s lips puckered. He said in Punjabi, “Don’t make yourself crazy thinking about these things. Learn a little bit about Islam, why don’t you?”

Everyone looked down guilty. “Haan haan, yeh to hai.” That is what they paid Hafiz Saab for, to keep them in line.

He sipped on his chai. “Ek chicken kaat key dey do.”

My father went into the back and sifted through the parts of chicken to give Hafiz Saab his favorite pieces: four legs, three necks, no breasts. He threw these into a plastic bag where the blood clung to the inside edges. Hafiz Saab took the bag of chicken, wet and floppy.

He made a half-gesture to look in his pants pocket. Hafiz Saab had started a new fashion among the uncles, a salwar on top and pants on the bottom. That way, they could still look Pakistani, but have pockets for all the things necessary to carry in this new country: keys, identification cards, money. All the men had started to dress like Hafiz Saab. All except Saima’s uncles. They still wore tight jeans and shiny, polyester shirts.

After coming up empty-handed, Hafiz Saab looked at my father. “Write it in The Book.” My father didn’t hesitate. He pulled out The Book. For Pakistanis in Corona, there were two books. One was the Quran and the other was where my father fed everyone in the community for free. If my mother ever found out about The Book, she would go crazy. What everyone owed was written down in there.

At first, people only owed small amounts, but when they realized my father was never going to ask them for payment, the sums got larger, and the items went from packs of roti to burlap sacks of flour. From half a chicken to a whole goat. It was all written at first in my father’s flowing handwriting, but now it was written in Azim’s. It was hard to tell the difference. To me, all men in Pakistan had the same script.

“Chalo, it’s time for namaaz.” Hafiz Saab took one last long sip and put his cup down on a shelf next to the counter. He didn’t bother to throw it in the garbage, even though it was right next to his feet.

I drifted to the back of the store, touching bags of all different kinds of daal by color. My father called me back to the front. “Do you want to come with me?” ?

I nodded excitedly, and everyone laughed. The masjid had just gotten speakers, and Hafiz Saab was going to give the azan so the whole neighborhood could hear. The masjid wasn’t even close to finished, but our fathers had started from the top and were building their way down.

The uncles and Hafiz Saab left. I waited while my father threw away the cups and put the towel back on the tea kettle, then put it where the mice couldn’t reach. He locked the door and turned the sign to OUT TO PRAYER. We walked to the masjid together, quiet, the way we always were when we were alone.

It was Maghrib time and the light was dimming. The sky was turning from blue to orange to pink. We heard Hafiz Saab even before we got there. I didn’t know his voice could sound like that, like a man’s voice turning back into a boy’s. He recited into the air, “Allah ho Akbar . . . Allah ho Akbar. . . .”

The azan came through over the loudspeakers. Men and women everywhere came out on the street. Everyone in the neighborhood tilted their heads and listened. Out of basement apartments and sixth-floor walkups, Muslim men started walking toward the sound, pulling their topis out of the backseats of their pockets.

The sun went down, and the clouds bent low over the buildings. I stood in front of the masjid and held my father’s hand. The light was turning pink and darkening, and I saw my father was weeping as a sleepy, blue light settled on everything.

Bushra Rehman is a writer from Queens, New York. “The Summer of Young Uncles” is an excerpt from her recently-released debut novel, Corona, a dark comedy about being South Asian in the United States. Corona (Sibling Rivalry Press 2013) was cited among this year’s Best Debut Fiction by Poets & Writers. Rehman is also co-editor of the anthology Colonize This! Young Women of Color on Today’s Feminism, and her writing has been featured in several publications and anthologies. http://www.bushrarehman.com