Renowned for use of the humble felt-tip marker to boldly re-interpret the tradition of the salon nude, TextaQueen explores politics of sex, gender, race, and identity in tangent with ideas of self-image and interpersonal relationships. Texta’s practice articulates delicate interplays between vulnerability and empowerment, intimacy and exhibitionism, and subjective and collective expressions of feminist, queer, and cultural identities. 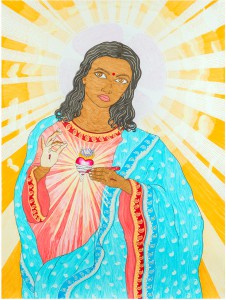 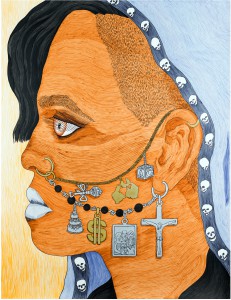 Reclaiming the gothic appropriation of the Indian nose chain while claiming my latent gothic identity, each of the charms represents my cultural influences. A baby’s rattle saying “It’s a Girl,” imposing binary gender from birth. The wedding cake normalizing heterosexuality, monogamy, and marriage. An ABC building block of growing up learning only the colonial language of English. The dollar sign of capitalism. The rosary beads and crucifix of Catholicism, which is often used in gothic nose chains also. The map of India cut out of the map of Australia representing cultural identity, seen both as racial over locational and my dual identity as (non-Indigenous) Australian and Indian. And a family portrait, invisibly embodying many of these influences. 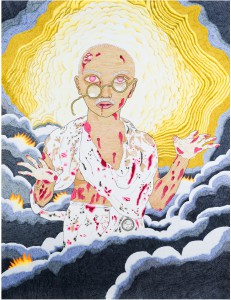 Possibly the most globally famous Indian cultural icon, Mahatma Gandhi was important to the movement for Indian independence from the British through non-violent resistance, yet Gandhi expressed anti-black racism in South Africa and misogynistic sexual behavior towards young women. Here, returned from the dead as a salivating zombie, Gandhi is a literally imperfect figure. I’m questioning our idolization of leaders into one-dimensional icons, how we erase their complexities and ignore their humanity, and the dangers of fixating on hierarchies of leadership. As a self-portrait, I’m contemplating my own imperfections. 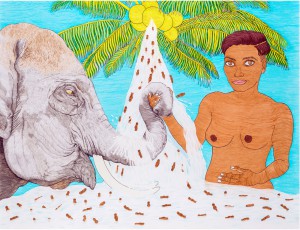 Who am I from?
How do I connect to my ancestors?
An elephant never forgets
But when my research tool is Google
Searching: Goa India
It’s “a top vacation destination”
White hippies drumming at sunset to find themselves
Private beach resorts with white chairs along the sand
Each click brought to my screen via the flashy lenses of
Those finding or selling “exotic escape” or “affordable luxury”
Reminders of my heritage
As changed and stolen by colonizers and capitalism

But my body remembers who I am from
My body holds connections
Naked, I arm/trunk wrestle with the long memoried elephant
My ancestors shimmied up coconut palms
And now they float down around me in coconut water
As supermarket chocolate jelly babies called “Chicos”
A rare visible brown consumable of my childhood
I delighted to eat myself while others were eating my otherness

But my body remembers where I am from
My body holds connections
Naked, I wrestle, my arm with the trunk of the long memoried elephant
Both an embrace and a struggle, to connect
My ancestors shimmied up coconut palms to collect their fruit
And now I see them falling down from the coconut palm,
floating around me in coconut water
I see them as chocolate caramel gummy babies
labeled in Australian supermarkets as “Chicos”
A rare visible brown consumable of my childhood
I delighted to eat myself while others ate my otherness
Now I hold my belly over my womb
Pondering the continuation of my bloodline
What I carry and what I may pass on.

TextaQueen has exhibited widely and wildly at white-walled galleries with acronyms such as MCA, PICA, AGNSW, GSCAS, ACMI, and GOMA, and internationally in Belgium, Amsterdam, and Montreal. TextaQueen’s work is held in the collections of Art Gallery of Western Australia, National Gallery of Victoria, National Portrait Gallery of Australia, University of Queensland, Mornington Peninsular Regional Gallery, Monash University of Modern Art, Cruthers Collection of Womens Art, Art Gallery of Ballarat, Artbank, and private collections in Australia, the United Kingdom and North America. http://textaqueen.com