Or How I Learned To Love Mangos, Bollywood and Water Buffaloes
by Jenny Feldon
(Sourcebooks, 2013) 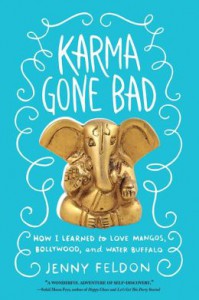 For an immigrant such as myself, who moved from a big city in a developing nation to battle the loneliness of living in the United States, I was eager to read Jenny Feldon’s reverse experience. In the mid-2000s, Feldon and her husband Jay, both twenty-seven years old, have been married less than a year and reside in Manhattan, where Feldon’s life is quite fulfilled with Starbucks, her dog, yoga, her blog, and her novel-in-progress. Then Jay’s company transfers him to Hyderabad, India for two years. Feldon has misgivings from the get-go. Despite the chance to, as she says, “ride elephants and visit the Taj Mahal,” she admits zero interest in traveling outside America. She also refuses to be practical. Although an expat guidebook advises taking only essentials on the plane, Feldon insists on packing designer shoes and cocktail dresses.

When the couple arrives in Hyderabad, a man tries to steal Feldon’s white YSL handbag; the drive to their apartment is an equally unnerving experience. By the end of their first day in the city, Jay falls ill with the strange chikungunya fever. He recovers soon enough and begins to settle down, but Feldon falls apart.

One could easily commiserate with Feldon’s misery and confusion. When I moved to the United States, I also felt unmoored—I had thought all of the US was some version of New York City and San Francisco combined. In much the same way, Feldon expected a glamorous expat lifestyle only to realize that India is not a brown version of Sex and the City (though I wonder if she would have adjusted any easier had she been able to let go of her preconceptions).

Many of Feldon’s complaints will strike the reader as all too valid—constant food poisoning, or being constantly pawed and photographed in public because she’s white and blue-eyed. India is dirty, dusty, and hot, with mosquitoes, stray dogs, and buffalo wandering city streets. Feldon, a coffee addict, can’t find a decent cup of coffee anywhere, not even at Café Coffee Day (a Starbucks-type place), and the plastic to-go lids melt. She tries to be part of the expat social scene but, just like the Indians, most of the other expats stare at her out-of-place designer dresses and shoes.

It is only after a serious threat to her marriage, and only after Jay reminds her they have six months left in India, that Feldon perks up enough to be curious about the country. It’s a pity that this turnaround happens in the last fifty pages because those experiences are interesting: she hires servants; she takes an interest in her driver Venkat’s sweet love story; she meets a savvy local, Anjali, and Feldon’s world opens up; she starts practicing yoga again; she gets some “retail therapy” at an old spice bazaar; she braves a local grocery in order to make Jay chicken soup; she visits a local orphanage.

That said, Feldon’s exotification of third-world poverty is disturbing. She sees beauty in the world after meeting a slum family, interacting with an orphan girl, and seeing a little barefoot errand boy. Does Feldon experience the same beauty when witnessing poverty in the US? In many instances, I was unsure of what to make of her tone. In the following passage, she goes to the cinema to watch a Bollywood film, but is she being funny or flippant?

The final credits of Dhoom 2 rolled, and I stood up, wiping a tear away with the back of my hand. I’d loved it. Well, loved it . . . but didn’t really get it. Why was everyone so happy and dance-y when life in India could be so unspeakably hard? . . . Here was something Indian I could get on board with: glitz and glamour and fairy-tale romance.

Can Feldon truly not see that Dhoom 2 is as much an escapist fantasy for her as it is for any Indian? That an American and an Indian share a common humanity? Ironically, Feldon decides she wants to be a Bollywood superstar, and to that end, starts taking Hindi lessons.

Feldon sees everything through the dichotomous prism of “her own self” or that of the “other” in an irreconcilable way. This is a shame, given that she otherwise offers social commentary, such as her focus on the Indian obsession with skin color and the glass ceilings imposed by caste, which prevent Venkat from living the American dream of rising above one’s circumstances. Venkat, who is Hindu, dislikes Christians and Muslims and yet has close Muslim friends. Feldon takes note of his hypocrisy, but she does not question it. When Hyderabad is under terrorist attack, Feldon allows Venkat to have the last word: “Muslim peoples no good people . . . No more Muslim meaning no more problem,” without any discussion or debate regarding his point of view. Is Feldon’s silence because of her lack of understanding of the social dynamics, or does she simply not think Venkat’s views may have consequences?

Feldon demonstrates deeper introspection when she writes of America; her words are subtle and nuanced. She is most engaging when she writes about her parents, in particular her relationship with her father, a man who comes across as a solid, decent human being and a very wise parent.

It would have made for a stronger memoir if Feldon explored what India meant to her, for better or worse. The subtitle, How I Learned to Love Mangos, Bollywood, and Water Buffalo, is misleading. “Love” ought to have been replaced by “tolerate” or “accept.” Many threads are left unfinished; for example, I would like to know why Monsoon Wedding is her favorite film and how she finally figured out how to do the laundry. As it is, Karma Gone Bad is a quick read written in the same clean, simple style as Feldon’s blog, and so will certainly appeal to her existing fans. It portrays an India that is confusing but not really demystified.

Soniah Kamal was born in Pakistan, raised in England and Saudi Arabia, and lives in the US. Her debut novel, An Isolated Incident, is forthcoming in 2014 and her short stories and essays have been published in the United States, Pakistan, India, and Canada. Soniah is in the MFA program at Georgia State University, where she is the recipient of Paul Bowles Fellowship in Fiction. www.soniahkamal.com