These pictures are part of Indiaworld, my forthcoming photography book about the global Indian diaspora. Indians have lived in the Caribbean since the mid-1800s, brought by the British as indentured laborers to work in sugar and rice plantations in Trinidad, Guyana, Jamaica, and other colonies. Most migrants came from the modern states of Bihar and Uttar Pradesh, with smaller numbers coming from Tamil Nadu. Indo-Caribbeans maintain unique traditions, often with roots in rural India, especially among Hindus, such as the puja ceremony around a prayer flag called a jhandi and the celebration of Phagwah, the Bhojpuri word for Holi. Many Indo-Caribbeans have further migrated to New York, Toronto, and London. Guyana has been one of the largest contributors to New York’s immigrant community since the early 1990s. The Richmond Hill neighborhood in Queens is called Little Guyana and is the center of the Indo-Caribbean community in New York. 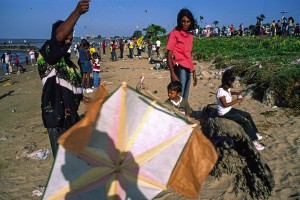 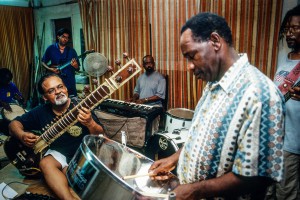 Mungal Patasar and his band Pantar, which combines his sitar with steel plan and other instruments. Chaguanas, Trinidad 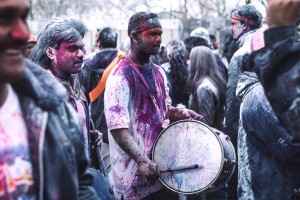 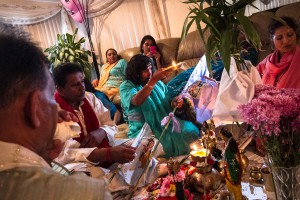 Radhika Drebaul and her brother Dennis Jaikaran perform a jhandi ceremony, the dedication of Hindu prayer flags in the Indo-Guyanese tradition, on the anniversary of their mother’s death. Ozone Park, New York 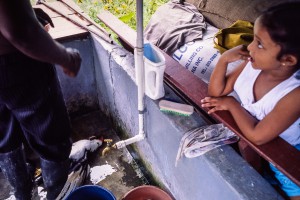 Ashely watches while her grandfather kills a duck. Hague, Guyana

Preston Merchant lives in the Bay Area, California. He teaches photography as an adjunct professor at Columbia University’s Graduate School of Journalism in New York. A selection of his images is featured in an exhibit by the Smithsonian Institute’s Indian American Heritage Project, opening in the winter of 2014, called “Beyond Bollywood: Indian Americans Shape the Nation.” http://prestonmerchant.com