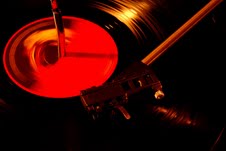 The three cognates of a triangle on a ghostly black background. The obscure, dispersive prism, redolent of unearthly pyramids. The splitting white light, turning multi-hued. No words, just the image. Straitlaced yet radical: the iconic jacket of Pink Floyd’s 1973 epic album, The Dark Side of the Moon.

I pondered on this visual entryway to the world of glistening black discs for quite some time before I took the vinyl out of its sleeve, placed it on the turntable, and dropped the stylus on it. With a stately gait, the needle moved on the spiral grooves. As I listened to the sound retracting from the spinning plate, I was suddenly gripped by a wave of sepia. The long glide through time took me to those rare nights of surreal beauty when Nat King Cole formed the backdrop of my childhood home in the north of Delhi. Despite decades of technological evolution, these flying saucers are my way of going back to a softer world, like pressed rose petals between the yellowed pages of an old book or family portraits that hang on the walls for generations. As I roamed a distant clime, the jump of the needle provided a much-needed pause in the narrative, an inconspicuous punctuation in the unmitigated fandom of long-playing records.

You can’t help but feel a strange relationship with the creator of vinyl records, a relationship similar to that of a poet and a practitioner. It forms an inescapable part of the listening experience. Lost in the grooves of these records is the history of discography, which began in 1902 with the founding of the Gramophone Company of India in Calcutta (now Kolkata). Recordings of classical artists like Gauhar Jaan, Peare Saheb, Lal Chand Boral, and Kali Jaan formed the mainstay of the Gramophone Company. The first vinyl record was created in the 1920s in a factory in Sealdah, in the suburbs of Calcutta (1991). In 1932, three Indian recording companies were born there out of a nationalist urge to compete with the British-owned Gramophone Company of India. One of these was Hindustan Records, which requested Rabindranath Tagore to record some songs and recitations. And thus, Ekla Chalo Re was recorded live—the first-ever recording of a song by Tagore himself (Mukhopadhyay 2009).

Through spools of time, the turntables and the cache of records reached the middle-class drawing rooms of black-and-white television sets and Rexene sofas. Records are icons from a time that seems light-years away from today’s technology.

But there are still places for record enthusiasts, who are given closely guarded entrance to this hidden world of vinyl. The Radio and Gramophone House in Connaught Place in Delhi, the pantheon for music aficionados, has mapped the trajectory of vinyl’s evolution from its beginnings to its status in today’s popular consciousness. In the old quarters of Chandni Chowk, opposite Moti Cinema, is the blink-and-miss New Gramophone House. Opened by the late Bhagwandas Rajpal and his son in Lahore in 1930, the shop relocated to its present spot after Partition. As I wade through a shop selling shoes and chappals, I see Avinash Rajpal, its present owner, surrounded by his artifacts of sound. Not many rummage through the shelves, but he has adjusted to the ebb and flow of the business.

Can a collector of melodies be the seller as well? Syed Akbar Shah is one. The records for sale at Shah Music Centre in Old Delhi’s Meena Bazaar are only a fraction of his collection. In the dim confines of his godown in Daryaganj rest just a few thousand jewels. Shah never sells a record of which he only has a single copy.

Kolkata, now the mecca of vinyl lovers, is home to many record shops. With the quaint shops in the Baithakkhana Bazaar or the pavement mosaic at Free School Street, the magic of vinyl never leaves the true collector. Even if buying is not on the agenda, a collector can while away hours rifling through the racks. Days after days of digging in dirt, one may find an art-filled sleeve with a scratch-free recording.

Schools of thought vary among collectors: there are the 78 RPM collectors who revel in the brittleness of shellac records, and then there are the somewhat more modern collectors of 33 1/3 or 45 RPM vinyl. Though audiophiles are a rare species now, there still are collectors like the Japanese writer Haruki Murakami, whose personal record stack stands at 10,000, or the Indian actor Victor Banerjee with a collection of 8,000 records.

Nostalgia is a sort of vanity. While musicians shine with the glory of performance, record collectors get their share of the limelight when they run their hands over a classic cover and remove a rare record to present before an audience (but not necessarily to give them access to it). A fellow collector is not a guru-bhai but a competitor, worthy only of condescension. Typically over thirty years old, record collectors come in all shapes, sizes, and generations. These antisocial creatures have their Sundays reserved only for records. For them, collecting is a journey to unearth the treasures hidden in dusty basements. Holding and hearing a record has a sensual quality that, like beauty, only the beholder can understand. Music is personal; it requires solace and privacy.

These fragile things are for the listener rather than the hearer. Picking up one from the shelf, putting it on, listening to it, flipping it over requires a delicate balance of attention and patience, an unyielding commitment. It is a ritual—like a Japanese tea ceremony that is rich in subtleties and takes years to perfect, or writing with a Parker 51, which requires you to hold the hooded nib snugly between your inky fingers as you witness the flow from the fountain pen onto parchment. It is for those who despise something produced by a boxy machine, requiring merely the writer’s signature. At the other end of the technological spectrum, the iPod generation, fixated on Twitter updates blinking on their phones, does not respond to these black beauties.

Spawning counterculture syndrome, records are said to be making a comeback—the arcane defying convention like everywhere else. With the price for a record ranging from Rs 1,000 to Rs 2,500, and for a turntable, Rs 17,000 to 2.5 lakh, it’s increasingly difficult to add to an existing collection. The musty old cupboards and shelves are not being reborn but replaced. A vintage delight, records are now for those who root for the retro. The authentic antique of a wind-up gramophone or turntable adds to the manjusha of the drawing room, even if it doesn’t play well.

The collector with the heart of an artist is left behind in the years of yore, a rasik hunting for reprieve from the new. For collectors, or as I like to call them, timekeepers, records produce a past that is paradisal but irretrievably lost. In the sodden soil of memories, they sow seeds of solitude. Amid frenzied lives, they look for the quietude of nostalgia, the quietude of sound.

Mamta Nainy is a children’s writer and editor based in New Delhi, India. She is an avid reader with a keen interest in visual art and literature. Her other pursuits include collecting music, failed attempts at drawing, a strong fixation with rivers, and an uncanny relationship with pens.