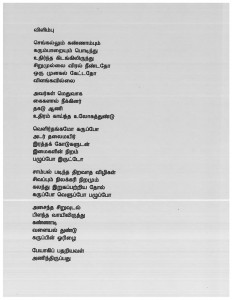 From a pit of shattered
Red brick and limestone and
Slivered black rock
Was that a little finger?
Did I hear a moan?
I’m not sure.

Blood-streaked eyelashes
Golden or dark
Closed eyes dusted with ash
Charcoal and red it clings to the skin
Ebony, brown or white?

In the open mouth of a small twitching body
Shattered glass
Bangles
A shred of black.

Was it a sari, skirt or niqaab
Worn by the
Screaming demoness?

Beside me the boy
Asks
Amma, when will you buy me
“Call of Duty?” 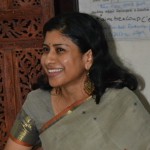 Geetha Sukumaran was born in Southern India. She is a graduate student in Humanities at York University, Toronto. She is the recipient of the N. Sivalingam award for her research proposal on Tamil poetry from Sri Lanka and Trauma under the title Contemporary Tamil poems from Sri Lanka: Regional Sensibility and Mainstream Trauma Theory. She is a poet and a translator. Her translation of Sylvia Plath’s poems, Tharkolaikku parakkum panithuli Otrai Pakadaiyil Enchum Nampikkai was published in 2014.

Nedra Rodrigo (translator) was born in Sri Lanka and came to Canada during the civil conflict. She is currently completing her PhD in the Humanities program at York University, on trauma and Tamil refugee identity in Canada. She is a spoken word artist who has been featured at Scream in High Park, Desh Pardesh, Masala Mendhi Masti, and the Asian Heritage Festival. Her poetry has been published in various anthologies including Understatement and Shakti Ki Awaaz. Her essays have been published in the International Journal of the Humanities, Global Tensions, Global Possibilities, and Human Rights and the Arts: Essays on Global Asia and Studies in Canadian Literature. Her translations of the poetry of Cheran, V.I.S. Jayapalan and Puthuvai Ratnathurai were published in the collection Human Rights and the Arts in Global Asia. Her essay, “Tamil Identity in the Age of Digital Media,” received the Tamil Literary Garden’s award for Outstanding Essay in 2013 and was published in Kalam.