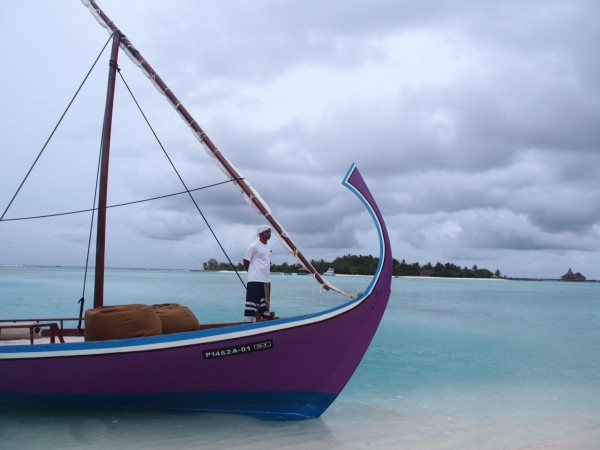 It would be ironic to say that an irrational fear of the sea brought me to Maldives. I had read alarming reports that declared Maldives a sinking nation. The sea is rising, usurping beaches and forests. It sits around Maldivian shores, roaring a threat that seems more real as time passes by. How long before it swells to seize the islands? I wanted to sense its might.

A speedboat took me from Malé’s Ibrahim Nasir International Airport to Dhigufinolhu, one of the many islands that cater to the thousands of tourists the Maldives welcomes every year. Local guides on the boat spoke to each other in Dhivehi, the native tongue of Maldivians, which bears a strong similarity to South Indian languages, particularly Malayalam. I listened to the brisk clatter of syllables and a subtle lilt akin to Sinhala, the mother tongue of Sri Lankan Sinhalese.

One of the guides talked to me about the tsunami of 2004. Monstrous waves, some as high as 50 feet, radiated from the epicentre of a massive earthquake in Sumatra, Indonesia and crashed into coastlines of eleven Indian Ocean nations from Africa to Thailand. The water rose quickly to engulf Maldivian beaches and resorts. Locals and tourists were stranded in chest-high waters as a hungry sea barged in. Many low-lying islands were devastated as the waves dragged and drowned people and animals. The recklessness with which the sea could invade the shore and endanger lives terrified Maldivians and the rest of the world.

The ocean thundered as our boat sliced through its blue waters. It heaved and hissed. Its frothy waves rose high while my fingers gripped the railings around our boat. We docked at Dhigu Island in less than an hour as the midday sun beat upon the still sea. I stepped onto a barge to the sound of local men beating the bodu beru, a traditional Maldivian drum made of stingray hide and bamboo wood. Like the rumble of the ocean surrounding the island, the rhythmic roll of these drums could be heard across the resort. Maldivian men danced to the beat and crooned folk songs that reminded me of the pulluvars of Kerala, whose melodies resonated in homes and temples, their one-string violins creating an air of melancholy and magic.

The torpid currents of a blue-green lagoon welcomed me in Dhigu where I was ushered into a villa that was barely a few feet away from the gentle waters that whispered to the shore. An expansive sky bent to touch the dark sea beyond while the lagoon lazily slapped the shimmering beach replete with moist sand, shells, and dead coral. Hundreds of hermit crabs lived near the villa and dragged their shells with them, burrowing in the sand and climbing on palm trees. Restless white spider crabs played frantically and disappeared into pin-sized holes on the beach as Maldivian water hens snooped around, croaking aloud. White herons stood still near the clear waters of the lagoon while seabirds fluttered above, skimming the surface of the water. The Maldivian sunset calmed my senses; it set the sky ablaze.

I didn’t see the ocean’s destructive strength until powerful, stormy winds pounded its restive waters at night. The sky pelted it with torrential rain as it agitated against fierce gusts that roared through the villa. Angry waves lashed the very sand they had kissed barely hours ago. The sea’s sudden mutiny made my hair stand on end. Its placidity was just a charade.

A new day dawned, smelling of the earth. The sky wore an intense hue of blue and the lagoon rolled out listless waves that touched the shore and retreated. The grey sea masked its belligerence again, its demeanour calm but playful. The sun lit up the sky, inviting flocks of birds and white wisps of clouds that obeyed the breeze. I scanned the waters and spotted stingrays swimming very close to the shore. An angelfish glittered at a distance.

The steely waters of the vast Indian Ocean flexed their muscles as the helmsman steered our boat into the sea’s foamy crests. Magnificent spinner dolphins swam close to the boat. They suddenly rose from the waters, spun in the air, and dove into the turbulent sea as young Japanese tourists clapped and hooted. The boat swayed with the swell, dancing dangerously on choppy currents. I sensed the indifference with which our boat was tossed as the heavy sea lifted and curled into unpredictable, savage surges.

A coral archipelago of about 1200 islands, Maldives faces a formidable foe in the sea that besieges it. Spread over 90,000 square kilometers, the islands are grouped in a double chain of 26 atolls and surrounded by the Indian Ocean. An average ground elevation of just 1.6 meters renders it vulnerable to growing sea levels, a phenomenon that threatens to create millions of environmental refugees across the globe before the end of this century. Rising sea temperatures and increased oceanic acidity caused by growing levels of carbon dioxide are the biggest threats to the coral reefs that not only sustain the ecosystem of Maldives but also protect its islands from a raging sea. Without the reefs, the sea could constantly intrude upon the land, rendering its soil and groundwater unusable. Salt intrusion could make the Maldives uninhabitable long before it begins to sink. While researchers predict a rough future for the island nations of the world, Maldives has begun to build its defences.

Aud, a local Maldivian guide, told me that his leaders are aware of the danger at their doorstep. Maldives banned coral mining many years ago and aims to be carbon neutral by the end of this decade. Former President Mohamed Nasheed, who came to power in 2008, had dealt with the issue of climate change forcefully, organizing an underwater conference for world leaders in an effort to show that if carbon levels continue to rise, the Maldives will be under the sea. Nasheed planned to replace fossil fuels with sustainable energies such as solar, wind and biomass. He also focused on energy efficiency and a good solid waste management system. A politically tumultuous 2013 saw the Maldives elect their sixth President, Abdulla Yameen. No one knows the fate of Nasheed’s climate change policies, but in an interview last month, Mathias Hammer, the director of international conservation organization, Biosphere Expeditions, revealed that President Yameen intends to make the entire Maldives a marine protected area with stricter regulations on human activity. Many conservation organizations have chipped in to help Maldivians protect the reefs that sustain their livelihood. Biosphere Expeditions has engaged the locals by launching reef education booklets for Maldivian children and scholarships for adults to work with marine biologists who train them to conduct reef checks. The organization believes that local interest and engagement is indispensable to the survival of the islands.

There are diverse views on whether the Maldives is doing enough to prevent further environmental damage, and a glimpse of the massive seas surrounding Maldivian atolls makes one wonder if the Republic and its estimated population of 394,000 can afford to take a gamble. The warnings are subtle, the message isn’t: Maldives must fight back or fade away.

Aud pointed at a few environmental slogans scrawled on walls in Maafushi, a sleepy town close to Dhigu. Maafushi’s laidback air almost negated the cataclysmic danger it’s up against. It was the month of Ramadan and the town lay still. Most shops were shut as Maldivians fasted and prayed. People ambled on narrow streets lined with double bougainvillea and tall papaya trees while tourists cycled along the beach. Chair-like hammocks welcomed weary travellers on lanes that held modest homes. A line of palm trees stood near the sea, some erect in rebellion against heavy squalls, some bent and sullen. The sun glimmered near the chasm that awaited it, shooting golden rays of light onto the still waters of the evening. It would be night soon.

Snug in a small boat that rocked near the shore, I gazed at the star-lit sky that winked at the sea below. The boat crossed the static waters of the lagoon from Dhigu to Veligandu, which was closer to the sea. Connected to Veligandu Island by a long, narrow bridge, the Thai restaurant Baan Huraa stood facing the churning waters of the grim ocean. A dry lagoon with small puddles of water lay below the bridge awaiting the tide that would embrace it at noon and abandon it by evening. The blue sea of the morning looked black and deadly at night. It lurched forward like a fiend, its waves fighting to slam the shore. I crossed the lonely bridge that stood above the dry lagoon as the wind pushed the wild sea. Its rumble grew as the night advanced.

Before leaving for the airport the next morning, I said my goodbyes to the sparkling waters of the lagoon. Little waves lovingly nudged my toes as the lagoon stretched and withdrew. It was determined to swallow the land around it but sand pumps worked hard to restore the shoreline. The arresting beauty of the island belied its fight for survival. My boat back to Malé rode the clear waters of the lagoon and entered the sea. Massive swells and high waves signalled its power. The ocean constantly reminded everyone of its presence. Bound by the wind and the rain, it continued its endless dance with the shore as I left the island stunned by the enormity of what lay ahead for this paradoxical paradise. It would take nothing short of sustained global commitment towards better climate change policies for the Maldives to turn the tide in its favour. The sea isn’t giving up but Maldives isn’t either. Not yet.

An Indian national, Susheela Menon teaches creative writing to primary school students in Singapore. She dabbles in fiction frequently, and one of her short stories was recently seen in From the Depths, a literary journal published by Haunted Waters Press, USA. Her first short story, “A Night in the Deccan Express,” was one of the five winning entries in Elle Singapore’s writing contest and was published by the magazine in November 2013.