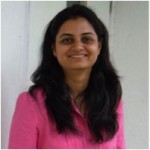 Poornima Laxmeshwar has authored a small poetry collection named Anything But Poetry published by Writers Workshop. Her works have appeared or are forthcoming in magazines such as Vayavya, The Aerogram, Northeast Review, Kitaab, Brown Critique, and The Stockholm Review. Her haiku have appeared in several magazines. She resides in Bangalore and works as a content writer for a living.