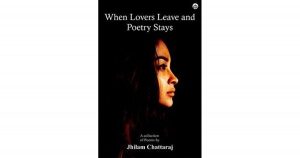 The three-line opening of Jhilam Chattaraj’s poem, “Distance,” shows the effects of separation from a loved–one. The poem reads like an embalmed memory. According to the poet, poetry is the house that “preserves” lovers with “perfection.” The quintessential tropes of leaving and longing have been in etched in poetry since time immemorial. For instance, the separation of Lara Antipova and Yuri Zhivago in Boris Pasternak’s novel, Doctor Zhivago births poetry. Chattaraj’s debut collection, When Lovers Leave and Poetry Stays is no different. Chattaraj offers forty musings—all inspired mostly by love and relationships but also desire, career, travel, creativity, and literature.

If we plot on the cognates of time, the points of lovers’ leaving and connect those lines, we get elliptical diagrams of poetry. These ellipses with multiple foci are poems, which cannot be dissected with the forceps of theory. There is the infiniteness of the Fibonacci Series, the complexity of Lagrange’s Equation, the certainty of Rolle’s Theorem, the beauty of Euler’s identity formula and an eternity found encompassed in Zeno’s Paradox. And that is what love has always been: a set of irrational numbers; a Venn Diagram of imaginary spaces; a matrix of impossibilities and a logarithm of improbable probabilities. And so, when a poem, which is a labour of love, is presented to a reader, masquerading as a critic, how should we read it? This is how Chattaraj puts it:

So, this reviewer too will try not to pin her poems on the wall and choke them with questions based on the bias of literary theory. What does the poet say in “Lovers Leave, Poetry Stays?” She says: “Pour me love/ to rain the pages that/ refuse to remember you,” (p. 47). And, does she get what she desires? Yes: “The seed once planted by a kiss/ now grows in words, / spreading in sheets/ and scribbles,” (p.47). Here, unwittingly, I am doing what I vouched I would not do – asking questions. This is the dilemma of the reviewer. Just as “grief” becomes impatient to leave when the poet starts finding comfort in it, a reviewer too becomes impatient to ask questions of a poem. In her poem, “I Made Grief a Cup of Coffee,” Chattaraj writes that this grief, preserved carefully, gives birth to poetry. And, one secret cause of such grief is revealed in the lines of the poem “Losing”: “I lost a lover/ to a husband,/ followed by/ lust-lapped clouds/ to a lonely, gentle breeze” (p. 30). How can one reconcile with such a separation – a distancing that goes beyond time and space? Perhaps, it is a weakness on the part of the poet to use grief as a crutch to propagate her poetry writing, but it is so aesthetic and unapologetic.

Travelling to different places is the concrete form of distancing from a place of origin. A number of poems by Chattaraj, are on those lines. When she writes about Hyderabad, she writes that “This is a city of cities/ spread on the henna laced hands of three sisters,” (p.23). When she writes of Kolkata, she writes: “we/ walked back into the foggy, blue light/ of a joyous city,” (p.42). She writes about Bidar: “Her unwilling hands still nurture the decaying/ Bahmani eras,” (p.13). And of Benares, she writes: “Benares unpasts all that we know,” (p.12). Just as there are places, there are also people. In a very poignant poem, titled, “Origins” Chattaraj writes:

I sat by your bed,
as if I were your mother
and imagined you,
a handsome young man
marching through the rebellious streets of Bengal.
I whispered, ‘walk on, walk beyond winter, papa, be brave (lines 12-17, p.37).

She also writes about her grandmother: “My hands are not mine/ but elfin heirlooms/ of a woman I see rising/ from the flossy folds of my flesh,” (p.22). She compares her academic ambitions with the domestic delights of her grandmother andimagines her mother as a bohemian, “village stamp collector,” (p.33), who settled in marriage instead of spending her life, “smiling alone at a book,” (p.33). There is much tenderness in Chattaraj’s words that just by virtue of being tender ripen into poems.

Another element that suffuses Chattaraj’s poetry is the idea of creativity itself. First, as a student and then being a professor of literature has given her a space where she can tackle creativity as a subject on its own terms. In the poem, “The Way I Write,” she explains her poetic process of sitting by the “window,” on “starless nights,” to imagine and wait for the lone fox to enter the forest in her head. The poem seems to be written in response to British poet, Ted Hughes’s “The Thought-Fox.” Instead of the animal, her words “boil over tea,” “peep through the cauliflower,” “leak from the body,” “stick on broken hair and the pages are flooded,” (p.52). In “Uninked,” she invokes technology and writes: “My fingers tap dance on delicate keys/ and thoughts trot on plug-in pages,” (p.54). In “Writing,” she explicates her vocation as a poet: “I’m on a trip with myself,/ travelling miles of language/ in search of a country without prose,” (p. 54). Chattaraj raises questions on gender, politics, society, and popular culture. Her approach is inquisitive and coloured with imagination. For her, poetry is an “unimagined home” because when lovers leave, they leave behind unimagined “walls, windows, novels, bed sheets,” (p.47). This is her first collection of poems and is promising enough show that she will grow in the course of time experimenting with forms and themes and developing into a better artist of an art form, she is already good at. 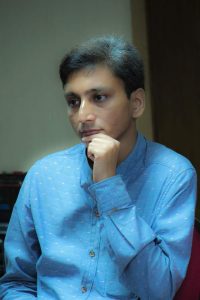 Amit Shankar Saha is a widely published award-winning poet and short story writer. He has won the Poiesis Award for Excellence in Literature, the Wordweavers Prize, and the Nissim International Runner-up Prize for Poetry. He has been nominated for the Pushcart Prize and the Griffin Poetry Prize. He is the co-founder of Rhythm Divine Poets, the Assistant Secretary of Intercultural Poetry and Performance Library and the Fiction Editor of Ethos Literary Journal. His poems have been included in Best Indian Poetry Anthology 2018 and he has read his poems at Sahitya Akademi, Apeejay Kolkata Literary Festival and at other literary events. His two collections of poems are titled Balconies of Time and Fugitive Words. He has co-edited a volume of short stories titled Dynami Zois. He has a PhD in English from Calcutta University and teaches in the English Department of Seacom Skills University.