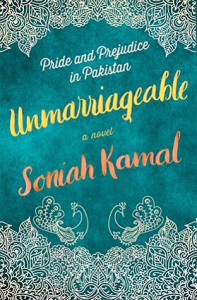 As a person of Pakistani heritage, I was especially thrilled to hear of Soniah Kamal’s Unmarriageable: Pride and Prejudice in Pakistan and couldn’t wait to get my hands on a copy. I eagerly delved into its pages and found it a compelling and enthralling read. Those who have never read Pride and Prejudice will find that Unmarriageable is a unique novel that stands on its own.

Written with the playfulness and irony of our beloved Jane Austen, Kamal cleverly weaves the familiar with the unfamiliar. Instead of the Netherfield Ball, we are given the NadirFiede wedding, which lasts three days – with the Mehndi, Nikah and Walima – as a traditional Pakistani wedding with all the old songs like Chitta Kukkar Banere to boot! It is quite refreshing to see the contrast and similarities of Pakistani culture with Regency England in relation to marriage, class, gender and double standards.

The Binat family are living in the small fictional town of Dilipabad, having left their luxurious life in Lahore after suffering financial loss.

Thirty year old Alysba Binat- to her mother’s constant worry and dismay- is still unmarried. The story opens in Alysba’s classroom of ninth graders discussing Pride and Prejudice. The story unfolds in Lahore, Islamabad and some parts in Karachi. Kamal skillfully creates her own unique characters that have the essence of the original, but something more modern. Kamal takes on all of society’s ills, including racism, ageism, post-colonial-beauty-standards and the blatant double standards of society towards men and women, with her adept satirical eye. Her use of literary and artistic references throughout the book provide depth and many layers to an already engaging read, amidst the luxurious and colorful backdrop where sizzling samosas are consumed with plates brimming with biryani. I enjoyed the play on names and the social commentary on the stark class differences and the superficial worry about “Log kya kehenge” – what will people say. Even though we laugh at Alysba’s mother whose actions are recognizable, as any desi who knows an “aunty” would recognize, Kamal reminds us that though we are laughing at her, she does it all out of a desperation to see her girls married, even if their happiness is not guaranteed. There is sincerity in her desperation.

Alysba’s tries to teach her students to think critically, to know there are alternative choices for women. She is as compelling, memorable and endearing as any classic heroine who knows her own mind and is not willing to settle, even if it means taking on the world and being judged.

There is something infinitely gratifying in finding that the hero and heroine connect on their love of books and their passion for social justice. I found it fulfilling and assuring to see how the author tied up all the threads of the story together, in a surprising and very satisfying finale. I must own that for me the ending was so perfect that I got very emotional. A fitting tribute that the last lines of this book are the first lines of the original. It leaves one perfectly content after closing the book. Superbly written.

Shirin Shamsi was born and raised in the UK, and now makes her home in the Chicago suburbs.  Laila and the Sands of Time is her debut middle-grade novel.  Shirin has raised six children- three human and three cats- all of whom have provided much inspiration for her stories.  When she is not writing, Shirin enjoys reading, oil painting, and spending time with family.