To Complicate a Love Song: An Interview with Vivek Shraya 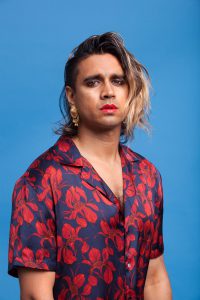 Vivek Shraya is a Toronto-based artist whose works span many genres, disciplines, and modes, including those of poetry, fiction, film, music, visual art, and criticism. She is the author of God Loves Hair, 2010; She of the Mountains, 2014; even this page is white, 2016; The Boy and the Bindi, 2016, and has published several essays. She is one-half of the music duo Too Attached, which released its debut record Bronze earlier this year, and has also released several solo albums. She has served as creator and collaborator for four short films: Seeking Single White Male, 2010; Ache in My Name, 2011; What I Love about Being Queer, 2012; and Holy Mother My Mother, 2014, as well as three visual art pieces: Trisha (2016), Your Cloud (2015), and Heartbeats (2013). Her works often explore themes of religion, sexuality, gender, identity, and race through an intersectional lens. She has twice been a finalist for the Lambda Literary Awards, and was the recipient of the 2015 South Asia Book Award for Children’s & Young Adult Literature for her debut collection of short stories, God Loves Hair. Shraya’s latest work, The Boy and the Bindi is a playful picture book for children aged 4-8 and is now available in stores.

Dheeraj Waran: One could claim that, in part due to the increasing significance of technology in the contemporary landscape, social media is gaining momentum as a mode of dialogue. As a Queer artist and activist with an active social media presence, how do you curate this landscape as your readers, viewers, and listeners engage with your work?

Vivek Shraya: As a brown, queer artist, my relationship to social media began as a necessity—platforms like Myspace were a way to promote and distribute my art when I didn’t have institutional supports. In many ways, this necessity remains, as social media allows my work to reach people that I wouldn’t have the means to reach otherwise. I also try to ensure that I am using these platforms not just to post photos of my food but also to show support and allyship with other artists, writers and activists.

DW: When you spoke at “Don’t Let Them Know” at the Indian Summer Festival held in Vancouver, BC earlier this year, you stated that you use she and her pronouns, and used the phrase “Fuck gender.” Could you elaborate on what actively queering gender means to you?

VS: For me, queering gender suggests a kind of deliberate subversion of gender. I am not trying to subvert gender — I am trying to be myself in a world where I am seen as a boy who is subverting gender.

DW: In one of your projects, Trisha, you recreated photographs of your mother; could you tell us a little bit about this project and your experiences embodying (your) mother(hood) and femininity?

VS: While transitioning, it’s been surreal to see the ways that I look like older photos of my mother. This is where the idea for the project came from. As the project developed, I realized that it was not only a tribute to my mother, it was a tribute to the daughter she prayed not to have.

During the actual photoshoot, embodying her required a particular commitment to not worry about “looking bad,” and support from a loving team who adjusted my body and guided my expressions based on looking at the original photos.

DW: Your work is incredibly interdisciplinary, spanning the realms of literature, poetry, film, music, and visual art. Could you tell us a little bit about the forces, individuals, and artists that have influenced and continue to inspire your work?

VS: Lately, I have been thinking about working on class presentations for elementary school and how much my mom pushed us to make our presentations stand out, not just by repeatedly practicing reading them aloud, but also incorporating collage and music. These presentations were very much interdisciplinary and I owe my ability to think and create this way to her.

I realize now that she wasn’t particularly invested in our presentations from an artistic standpoint or just being overbearing. As an immigrant, she was trying to cultivate in us the necessity of having our work stand out to be valued or seen.

DW: You were interviewed by Harper’s Bazaar (India) and The Hindustan Times earlier this year. How has your experience encountering and engaging with the not necessarily diasporic Desi viewership/readership been?

VS: I think there is a fascination with transness, but I don’t think this is limited to Desis.

DW: A large portion of your work refashions elements of pop culture in extremely meaningful ways. What kinds of limits have you encountered when trying to rework pop culture while navigating the realms of Canadian, Desi, and Queer Literatures?

VS: Most of my favourite pop culture is made by Black artists. My biggest challenge with incorporating Black pop culture in my art, such as my tribute album to R&B producer Babyface, is considering how to do so respectfully, and without appropriating.

The other challenges I have faced around incorporating pop culture in my work have been around age and culture. In my first book, there are a lot of 90s references that are completely unknown to younger audiences. Similarly, there are Indian pop references, like Sridevi, that are unknown to Western audiences. I don’t think it’s necessary for audiences to know every reference but I am more conscious about thinking through whether a story or sentence can work without the reference. Pop culture references can also feel a little gimmicky so I am careful to not use them as a punch line.

DW: God Loves Hair and She of the Mountains engage with Hindu mythology and “sacred” figures through a tangible and humanizing lens. Especially in light of the present landscape of tightening religious freedoms, the increasing visibility of the notion of the acceptable Desi identity, and the tumultuous relationship that a lot of Queers share with religion, could you tell us a bit about your experience navigating the intersections of artistic freedom and the realm of the sacred?

VS: Growing up, Hinduism and Hindu spaces provided a safety for me that I didn’t have in Western spaces — I would even say that my some of my first queer role models were Hindu gods because of the ways I identified with their soft masculinities. Consequently, it has been important for me to showcase the ways in which queerness and faith can co-exist.

DW: The Boy and the Bindi is your first work catering primarily to children. What factors mediated/ affected/ inspired your interest in this genre and this work?

In my day job, I work at a college doing anti-homophobia/transphobia training and so often I have thought about the necessity to have conversations about gender diversity at an earlier age. The Boy and the Bindi is my brown contribution to the white arena of children’s picture books that hopefully inspires children to reflect on gender expectations and the beauty of defying them.

DW: The role of the self-identifying Queer artist is a complex one. How have you addressed the challenges of expectations as well as that of homogenization in your creative process?

VS: In my book of poetry, even this page is white, there is a poem called “how to disappoint you completely” that speaks to some of the challenges of expectations, especially in relation to community accountability which often demands artists that embody any marginalized identity to be infallible.

Dheeraj Waran is a Fourth-year English Honours student at the University of British Columbia, Vancouver. A Queer desi who moved from Ahmednagar, Maharashtra, India to Vancouver in 2013, he is primarily interested in Postcolonial, Queer, and Postmodern studies. He currently works with New View Society; a mental health non-profit based in Port Coquitlam and intends to explore the realms of academia, creative writing, and publishing, while navigating the sinister path towards debt-repayment.
Image credit: Johnny Bass, 2016. @johnny506