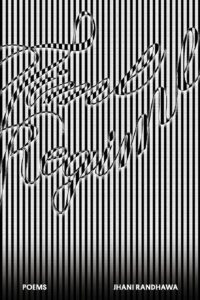 John Donne views poetry as a yoking of the unfamiliar ideas. These poems overdo it. At least in the first part. Sensory vicissitudes are yoked quite forcibly right in the first poem. Except for a couple of lines towards the end, the poem is about as obscure as obscurity can get. Cutting out wordiness or verbs does not mean they all get deleted, poets. Spacing could have been reduced in the first poem, “Primavera.” There was excessive white space—to the point of incorrigibility. Choose your first poem carefully, play it safe, I wanted to say to the poet. Luckily, just when I began craving for full sentences, with more meaning in them, they appeared.

Subsequent poems had full sentences towards the end. The poems introduce a multitude of interesting concepts from the sciences such as the negative pyramid or engage with the Humanities, mentioning the historian Walter Benjamin. The poet’s wide reading oeuvre was exciting to uncover. There are urban images of driving, a road trip, hiking. There is a nice ode to the fire element every now and then. There is a play of light and darkness and related visceral experiences. There are good words, better sentences, excellent phrases. Yet, I yearned for more explanation while I reeled under the splatter of resonant and new images. Clear meanings do not emerge. Everything is cloaked in words. Obfuscated by meandering connections. The poet makes her reader work very hard. She needs to drop more hints to her readers.

One rare full sentence in the early part of the book that made me pause was: “I’m looking at the ways we travel to meet our lovers, or leave them. At the grammar.” There are glimpses of ecological themes: “I have considered the spaces silver, grey, an absence of green. Citations. How I am upset by this modernity.” And then, the urban sadness theme: “Your workday carves stone. To make room for their emptiness, you express becoming sad about getting older, and it feels profound.” Some of her lines require us to skip a phrase and backtrack while reading to make better sense and to read them together again: “When I shock open, I meet the dream: stones are in our stones are in our mouths.”

And then again in this poem, the indented sentences must be read together, while the unindented go together. I am not demonstrating that through this poem as much as offer a glimpse of the style:

“Germ aligns with edge, love at the
Formal, fast
corrodes with
My empress spread her news
Into the earth in augur bruises
The sand mistook for cloth, and salt
Her letter
on the glittering turn.”

I loved the internal dialogue voiced out in this fashion:

“Which food, whose music was revolutionary, what revolution, how have
we been, and how will we continue because of course we will. We will? We will.”

The poems prompt an endless back and forth reading to simply stay on topic:

The South Asian references feel like a chance encounter. There is no excessive nostalgia or reverence.

“i begin to feel sad for reasons that my dead grandmother might not have felt sad
about: no women can facilitate gurdwara service, perform simran for a group
gathered
in a sacred place like this temple on the west london high street” …

“…the death i am mourning. or is it her life i am mourning?
or, as v says, the death of someone else crashes into one’s mourning
for one’s own death”.

The academic style sentences that sprang up in a poem that was sorting through some issues not necessarily simply about identity were nice:

“Dealing in
the casual language of empirical psychoanalytics, Hershmann tangles himself in
category
error again and again, and repeats ritual scenes, displacing their historicity
and his own presence as witness within the theater of convention.

Throughout his argument, Hershmann reiterates (though this is not his intention)  the limits of Eurocentric reasoning. Meanwhile, he still manages to convey that the Punjabi subjects—whose sexy, dirty hair he’s been detailing and chasing—remain opaque to themselves; they are subjects, Sikh, Hindu, Muslim, whatever, whose private performative languages are illegible even to them.”

The rush of words here are well-done: “We must decide how we love in these seasons. Some might say to whom we how it takes precedence.”

Some of the poems demand the reader to have infinite patience, to work backwards. Words often act like clues and the poems are like jigsaw puzzles. I ended up grouping similar words first in order to work my way back to make sense of them. This reminded me of how we read poetry in my BA class for an ‘annotation.’ If I had a hard copy of the book, the page would have numerous encircled words talking to each other, looking like a mind map with arrows connecting words and their various senses. There is too much distance between words and ideas and images, and the poet only gives the faintest clues, stretching associations to the farthest possible distance. The poems get better with fuller and longer sentences as we progress through the book. I just hope the reader sticks to discover the latter ones! Although a difficult read, I would recommend these poems to readers and ask them to appreciate their ingenuity. 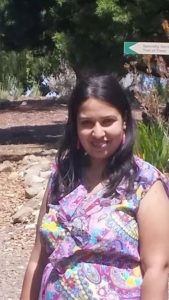 Senior Reviews Editor Sushumna Kannan has a PhD in Cultural Studies from Centre for the Study of Culture and Society, Bangalore, India. Her research on the South Asian devotional traditions and feminist epistemology focused on the medieval saint, Akka Mahadevi and her vachanas. She received the BOURSE MIRA, French research fellowship in 2006 and 2007 and the Sir Ratan Tata fellowship for PhD Coursework and Writing in 2003 and 2007. She has published her research on Bhakti, dharmashastras, ethics, women’s writing in Kannada and English as well as on translation theory in peer-reviewed journals and as book chapters. She is currently working on a couple of book projects and the translation of Kannada fiction into English. She also writes poems. One of her articles was nominated for the Laadli media awards 2017. She is currently Adjunct Faculty at the San Diego State University, San Diego, USA. For more of her writings,
visit: www.sushumnakannan.weebly.com