The Year that Was: Life, Art and Feminist Axioms

Perhaps not as furiously as the raging pandemic and certainly not as demurely as the silent passing-on of Aishwarya Reddy – the young woman who went into the dark night without as much as a whimper[1]— but talk regarding the unsuitability of Meera Nair’s adaptation of Vikram Seth’s magnum opus certainly prevails, in chat-rooms and otherwise, across the country. Literati expressed surprise that a sensibility that gave the planet a movie of the stature of a Salaam Bombay could produce something as frivolous as Nair’s adaptation of Seth’s A Suitable Boy. Furthermore, the babble iterated that Nair’s portrayal of India and Indians seemed rather extreme, false and completely cut off from reality. What was missing in these discussions was the fact that when Seth’s novel first appeared in print, more than a decade ago, it was celebrated more for its resuscitation of the canon of Indian-English literature, and Nair’s movie, in 2020, had given it a new lease on life. Clearly there appears to be a disconnect between the India of the fifties as set in word by Seth and Nair’s 2020 viewers.

As per the verdict, Nair was declared her guilty of racial prejudice and also an obnoxious aping of western accents by the characters of her adaptation. These moreover were seen as liberties that she as director had taken with the novel. Now while ‘fidelity’ to the original has long been discarded as criterion for judging cinema or at-least following NYU professor Robert Stam’s dismissal of its efficacy, the same does not hold true for audience-reaction, which evidently continues to hold sway. In this regard none would dispute the jubilatory reception awarded to Satyajit Ray’s depictions of the India of the fifties particularly the Indian/Bengal village in some of his films. While this earned Ray pride of place with the masters of world cinema – Godard, Fellini, Orson Wells and such like and also rescued Hindi cinema from being subsumed by a consumerist Bollywood tag it also offered to the western eyes at Cannes an India they were most comfortable with –one that agreed with discourses facilitating colonization. Not that Ray was on the side of the gooras but his films offer a voyeuristic display of the grueling poverty of rural India while the absolutely brilliant cinematic aesthetic renders palpable the inhumanity therein. Decades down the line such versions of India continue to prevail, take for instance Danny Boyle’s long-shot of the opening sequence of Dharavi in SlumDog Millionaire or the much-acclaimed class-divide thematic as touted to acclaim by Arvind Adiga in The White Tiger.

Seth’s A Suitable Boy on the other hand is contextualized against a lesser known India- the India of the Brown Sahibs – a class of upper-class Indians reared as per Macaulay’s A Minute on Indian Education – a class, British in all matters except the color of their skin. Nair faithfully adheres to this and hence the British accents! For instance, Lata’s brother intones a perfectly clipped, anglicized version as the Queens lingua franca as would be the case with most of his ilk but has never set foot beyond Indian soil. His embarrassment when he admits this to Harish— who in the final instance is the suitable boy— accrues not on account of intonations alien to the local landscape but on having to admit the absence of an Oxford pedigree. The contemporary critic as audience appears to have missed this point altogether confronted as they are on a daily basis with a variety of accents by Gen X through internet forays into distant lands. 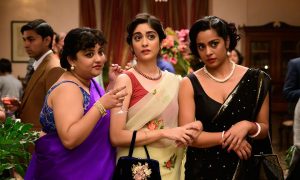 As regards the charge of racial prejudice levied against Nair on account of her portrayal of Lata’s mother’s muslim-hating predilections, need we be reminded that this was a generation who had witnessed Partition firsthand, an event where women were mercilessly pilloried on account of their religious affiliations? Even as much as a cursory glance at the research of scholars such as Urvashi Butalia and/or Ritu Menon would testify the veracity of this understanding. Lata’s mother, however tutored be the affability of her inculcated social mannerisms clearly carries the scars of Partition and while this does not justify her rudeness towards Kabir it is in keeping with the realist frame deployed by Seth for the telling of this story. We have here the portrayal of human nature with all its possible flaws and fallible imperfections; and so, in the final instance Lata chooses Harish, over Kabir – clearly a soulmate !! To many this affords fresh insight into the character of the fictional Lata or rather into the deceptive cunning cleverly cloaked under what now stood exposed as but a façade of innocence. But then, the act of choosing in itself does appear to be a progressive step for Indian womanhood considering choices are normally dictated to Indian women and their compliance taken for granted, particularly in matters such as marriage which involves the carrying forward of lineage. The educated and liberal-minded Lata treds the path well traversed and does not split hair regarding the irrationality of her mother’s Kabir/muslim paranoia. In a volte face, she just chooses Harish, and it appears that all has ended well. But then, has it really?

In the final instance, Lata has been an obedient daughter after all and it is with this that Seth presents before his readers and Nair before her viewers the crux of the problem besetting Indian womanhood. Obedience, submission and compliance, as represented by the fictional Lata of the fifties continue to be the hallmark of well-bred India womanhood and Lata, in the eventual count has proven her mettle regarding these traits. My contention is that this investment in obedience, submission and compliance continue to exist in an unbroken continuum from Seth’s fictional Lata to the flesh and blood, real-life character of Aishwariya Reddy — the second year BSc (Mathematics) student who took her life for sadly she was way too obedient, way too submissive and way too compliant. Snuffing out her existence was the only recourse this young lady could fathom, given her situation – poverty, a pressing loan procured by her father- a motorcycle mechanic in Bangalore- for her education and bleak chances of repaying it following the economic backslide caused by the pandemic. Guilt regarding the financial burden her family was enduring on her account was augmented on receiving the dictate issued by the college authorities to vacate the subsidized student accommodation. Aishwarya knew that she could not possibly afford board and lodging in the city. The choice before her now was to drop out of college and procure gainful employment. However, for a stellar mathematician such as herself this was a fate worse than death and she chose the latter. Speaking up for herself, questioning the unfairness of the demand to vacate the hostel room did not even present themselves as viable courses of action to this young lady reared as she was under the tutelage of respectable Indian womanhood as defined by obedience, submission and compliance.

Aishwarya played by the rules; she believed the myth to be the reality— the reality of a patriarchal world wherein patriarchy is determined not by gender alone but the conduct of those in authority. The learned professors of her institution failed to take this into account forgetting that compliance with authority is the first myth that feminism shatters. Had they applied this textbook awareness to the young lives coping with the reality of a pandemic perhaps Aishwarya’s tragedy could have been averted. 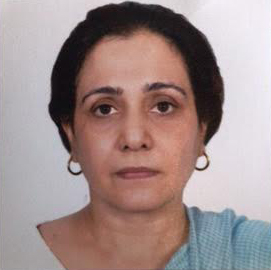 Dr Simran Chadha is an Assistant Professor with a Delhi University college. She curates, publishes on and teaches courses in postcolonial south Asian literatures in English, Film theory including adaptation of classical texts into Hindi cinema and Women Studies. Her most recent publications include an article entitled “Refugees and Three Short Stories from Sri Lanka” for Rodopoi, Amsterdam and a short story “Autumnal Leaves” for Muse India. Dr Chadha lives in New Delhi with her three children, two daughters and Pepper.