In the middle of the lake are four trees. Their branches reaching for the sun, as if in prayer.

These trees understand PTSD; their branches are hacked everyday. Purging in autumn, reborn every spring. They share in bounty, they share in pain.

The birds of paradise fly away. In loud, rasping mating calls, reaffirming their faith in life itself. Their cries, an homage to the gardens of past. My cries, a testament to the graves of war. A paradise lost. So many borders found.

gently tugging
at my heartstrings
a chinar leaf falls

A lone duck floats towards me. Surprised to find me here. Both of us, seeking respite from the daily visuals of life interrupted. Thoughts and dreams we shared with the mythical trees, no longer secret. 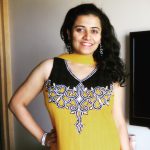 Sneha Sundaram is a poet, engineer and entrepreneur. Her recent work appears in Contemporary Haibun Online, Whirlwind, JACLR, Asahi Shimbun, The Fem, Yellow Chair Review and Haibun Today. She has won prizes and commendations in the 2016 Wordweavers haiku contest, 20th Kusamakura haiku contest, and British Council ‘Inspired by Museum’ contest, among others. Her poetry has been translated into Polish, Italian, Japanese, German and Bulgarian. Read more at www.snehasundaram.com.