In our Spring 2020 edition of Performing artists, Arts Editor of Jaggery Srividya Ramamurthy had a virtual sit down with Thanmayee Krishnamurthy.

It is fantastic to talk with you Thanmayee, so tell us did music choose you? (Smiling) How did you get into this form of classical Indian music?

Yes, you could say that. I was born into a family of musicians. My mother Smt. Rajalakshmi is a violinist and my father Sri. Krishnamurthy is an ardent lover of Karnatik music.

My initial training of music was at home under my mother, my grandmother Vidushi Krishnaveni and aunt Vidushi. Rajarajeshwari Bhat. My maternal uncle Vidwan. Vittal Ramamurthy, a world-renowned violinist is also my musical guide. Growing up in such an atmosphere, music was an inevitable part of my childhood. Since 2009, I have been blessed to come under the tutelage of my guru, Vidwan. T.M. Krishna. I had been a very big follower and a fan of T.M. Krishna Anna’s music all along. So, this was a very special moment for me as a student of music.

How wonderful! Blessed indeed. Apart from music what has you’re your other interests academically?

I studied bachelor’s in Computer Science in Nitte Institute of Technology, Bangalore and had worked as a software programmer for two years in Bangalore.

After I moved to the US, I studied my masters in Ethnomusicology from University of North Texas.

Ethnomusicology is a study of music within its social and cultural contexts. My thesis, entitled, “Sing Raga, Embody Bhava – The Way of Being Rasa,” phenomenologically explores the ontological connections between musical experience and rasa philosophy within the South Indian Karnatik vocal tradition. My other research interests include South Indian performance practices with an emphasis on Indian aesthetic, philosophical theories, literature of spiritual and bhakti traditions, and South Indian cultural history.

Apart from Karnatik music and academia, I have always been fascinated by language, literature, and poetry. I have also practiced and performed a form of expressionist poetry in Kannada language, which is popularly called as Bhavageethe. Recently, along with a few literary enthusiasts in Dallas, we released an album on D.V. Gundappa’s Mankutimmana Kagga, very famous literary work that is also referred to as Bhagavad Geethe of Kannada.

Ah! That is interesting. How can an interested person listen to this album?

Definitely. I would encourage them to listen to Kagga Lahiri. Also, here is a Bhavageethe I had recorded for an album in 2013.

Excellent!!! Can you tell us about your stage performances and any awards or recognitions?

Definitely. I did my debut performance at the age of 11, and since then I have been a regular performer and have given concerts in major music festivals in India and the USA. Including several prestigious venues like Chowdaih Memorial hall (Bangalore), The Bangalore Gayana Samaja, Music Academy (Chennai), Krishna Gana Sabha (Chennai), Shanmukhananda Hall (Mumbai), Vigyan Bhavan (Delhi) and Cleveland Tyagaraja festival (USA), to name a few. As a graded artist of the All India Radio, I have performed in both All India Radio and Doordarshan.

A few awards to mentions are:

That is amazing! Congratulations !! Tell us about your transition from India to the States. How easy or hard was it from a perspective of your musical pursuit??

Honestly, it was not an easy transition as the social and cultural set-up here in the US is not very similar to that of in India. The number of opportunities for a performer (who resides in the US) is lesser compared to those in India. Also, the constant learning process that materializes, while being in the vicinity of one’s Guru is something that I miss staying in the US. I try to catch up with these things by staying in India for 3-4 months a year. However, the most inspiring part of moving to the US was pursuing ethnomusicology, doing my part of research and writing about music, which has definitely been an enriching experience. Ethnomusicology not only has introduced me to different music cultures across the world, but also has given me tools to introspect my own culture, and music. In other words, it has made me unfold and experience music with more sensitivity.

Do you teach music? What are your experiences as a teacher??

I teach Indian music as a guest lecture for world music cultures and music appreciation courses at the University of North Texas, Denton, Southern Methodist University, and Dallas and Hiram College, OH. These courses are usually attended by both students doing music majors and non-music major students. I usually go to these classes with my Tambura and sing for the students along with explaining the technicalities of Indian music. Teaching these courses have always been an enriching experience, as they give me myriad opportunities to view Indian music from various perspectives. Some of the questions that are raised in these classes are very thought provoking.

Ah! Can you give us an example?

Well, students are generally enthralled with the process of learning in our tradition, which is intertwined within this unique association, Guru and shishya. The dynamics of a concert is also something that fascinates these students – where nothing is rehearsed with the co-artists. We meet them on stage at the time of the concert and an entire concert is done all extempore with each co-artist bringing their expertise and their bhava or laya to add the layers to a concert. The raga scheme and the interlayering, I can go on.

Interesting indeed. Are there any specifics where there is more interest based on these classes.

Yes, like the Jazz majors are interested in knowing more about the improvisation techniques, or manodharma. Along with the technique, there is also an interest in knowing how India musicians masters the art of various styles of improvisation. Some students are more interested in knowing the social structure and its implications on music culture. Recently, I had a session with Opera students who were particularly enthusiastic about the aesthetics of brugas (a type of stylistic speed phrases in Karnatik music). As I mentioned earlier, these sessions/classes have been an opportunity to contemplate and learn more about our culture, society, and music.

Thank you so much Thanmayee. On Behalf of Jaggery we wish you all the very best. 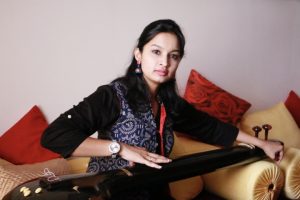 Thanmayee Krishnamurthy, a student of Vidwan T.M Krishna, is one of the most sought-after young artists in the Karnatik (South Indian classical music) scene today. She is best known for her emotive and expressive style of singing. Although primarily a vocalist in the Karnatik tradition, she also has a penchant for the Bhavageete style of music, which is a form of expressionist poetry. She performs regularly at concerts and musical extravaganzas in India and United States. Reach out to her at her website, Thanmayee Krishnamurthy.

Listen to some of Thanmayee Krishnamurthy’s concerts: Poorvi Kalyani alapana and Seethapati.