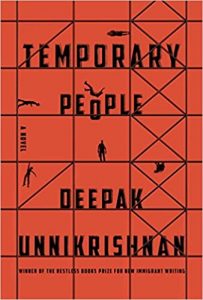 If you have ever wished for a book that is filled with rich magical realism along the lines of Salman Rushdie’s Midnight Children, then look no further. Deepak Unnikrishnan’s Temporary People is here.

Temporary People is a delight to read. As an ex-expat worker, I could relate to the truth behind these tall tales of escapist fantasy. The stories are a heady mix of the experiences of Indian migrants, mostly Malayalees who work in the modern day El Dorado a.k.a the “Gulf.” In the book, there is heat from the scorching desert sun, the sweat of desperation, the heaviness of longing, the lust for the dirhams, the stench of disillusioned dreams, the helpless rage and the determination to see a means to an end of all those who travel to the Middle East for a living.

The book is certainly unputdownable, thanks to Unnikrishnan’s narrative style that is humorous, absurd and imaginative. His employment of allegoric, satiric and parable-ic methods to dish out stories will remind you of Franz Kafka’s works. He has divided the stories (a.k.a Chabters) in the book into three sections, book 1, 2 and 3 with the numerals typed in Arabic, which appears to be like a personal tribute to the adoptive, temporary country; the UAE.

The very first story, Gulf Return, hits you with unexpected humor that will give a few loud guffaws and sets the mood for what’s in store for the reader. Underneath the humor, the desperation of the migrant workers to return home after having been away for too long is excruciatingly evident.

There are three stories by the same title; Pravasis, which loosely translates to ‘people living in a foreign land.’ The first and the second Pravasis contain just words and not sentences. The first Pravasis has precisely 63 words. 63 sharp words. The first story is harder hitting than the second one.  The third Pravasis has no words at all. It just contains two powerful cartoon sketches that shows many queues of immigrants who are presumably at airports. These three stories sum up the immigrant life in the Middle-East perfectly and in a way the book itself.

If you have ever been a constant taxi hailer while living abroad, then the Taxi Man is one story that you can relate to well. Taxi drivers are often the loneliest people in the world even if they ferry across people all the time, and even if they are with people all the time. The drivers indulge in a conversation with anyone who would give them half an ear and a pint of validation.

Mushtibushi is an impactful story where child sexual abuse is the central theme. Unnikrishnan becomes the voice of a 12-year-old, prepubescent girl named Maya who tells the tale of an anthropomorphic elevator named Mushtibushi which is a child molester. “Mushtibushi, the peep-show pimp, the looker upper hiker of skirts, the unzipper of flies. One more, I promise. Just one more. The harbinger of sleaze.” While this story is an excellent work of imagination it lacks empathy. I think the author has taken issue of child sexual abuse a tad too lightly; he has clearly never interacted with survivors of such abuse.

Throughout the book, Unnikrishnan has taken the liberty to add generous nuances of Malayalam and Arabic. This might be a challenge for readers who are not familiar with the jargon of the mentioned languages and places in the book. However, Temporary People is a brilliant piece of work and is remarkable as a debut novel. I believe that it has carved a spot for the author as one of the best emerging writers of Indian diaspora literature. The readers will not be left in a grey void after reading this book. They will either love it like I did or find it very claustrophobic so that they will stop reading half way through. And I am recommending this book to all those who are planning to go to the Gulf states to seek a fortune and to everyone otherwise.

Thangasurabi Bright Raj is a wordsmith, dancer and a chef at large. She published her first novel; Shall We Dance, Mr.Koshy? when she was just 24. Today, she runs Sinfully Delicious Cooking Studio in Hyderabad, India where she teaches West African, Italian and Thai dishes to enthusiastic home chefs. Her blog :  http://blogs.rediff.com/bronzegoddess/