In Feroz Rather’s short story “The Last Candle,” the reader is plunged knee-deep into effusive prose from a narrator-protagonist who may or may not be dying. A meditation on the past and present of Kashmir, “The Last Candle” is also a powerful testament to the stories we tell to sustain our selves in the midst of unmitigated acts of violence. Framed by the darkened bedroom of an unnamed present, we step back into a pristine valley of schooldays, scalding hot stoves, and morning rituals bound to be broken up by everyday terrorism. Soldiers ransack a shop in broad daylight, beating a suspect and leaving spectators in a weary panic. Any saving grace from these regular horrors must be found in the pages of past glories, and in epics yet to be fulfilled:

We stood looking into each other’s eyes, suspended in an ether of delicious unease. Then she lowered her gaze. The tips of the leaves crackled and began to catch fire near our feet. She ran back to the house and emerged with a book: Habbah’s Love Songs for Yusuf. I spread open both my hands. She placed it on them. On homemade paper, the songs were written in a flowing calligraphic flourish with a reed pen. The book, as I learnt decades later, was compiled by her great-grandfather a year before he was killed in the last half of the nineteenth century while leaving a mutiny against begaer, against the disgrace and misery of forced labour, against the soldiers of the despotic Dogra king.

You can read the rest of Rather’s story here.

The Towering Figure of Major Ali

Arif Ayaz Parrey’s short story “The Torture Manual of Major Ali” carries a sinister aspect beneath its bureaucratic tone. Whether he is real or not remains a mystery, but his minions appear to be fully gripped by his methods. Parrey writes with a cinematic crane panning across the many secret and not-so-secret torture sessions that continue beyond the sixty-odd year struggle for Kashmir. Using this wide-angle shot plunges the reader through multiple framings – of the state and military, of the rites of espionage, of the mendacity of political exile, of the purgatory of strife-ridden boundaries – before arriving at a language stripped of passions that nevertheless sound oddly familiar, especially in the wake of remembrances following Nelson Mandela’s death:

The thought of men in uniform working together as a corpus to theorize and institutionalize torture is the classic nightmare of restive populations. It is also a great rallying point for the men in uniform themselves; one around which they can build solidarity and overcome guilt and fear. The deniability factor is necessary so as to maintain the paradigm of organized madness, which is what counter-insurgency efforts must be in places where the guerilla aim is to swim like fish in water.

Ensuing passages extracted from this manual – which also may or may not really exist – serve to further glaze and subjugate the reader’s eyes, a numbing experience that leaves one searching aimlessly for the personal and familiar. Yet in the process of reading and examining the manual lies the uncomfortable truth of our complicity in state-sanctioned terror, redirecting the narrative from the mythical Major Ali to that of our contemporary times. Read more of Parrey’s story in the December 2013 edition of Caravan. 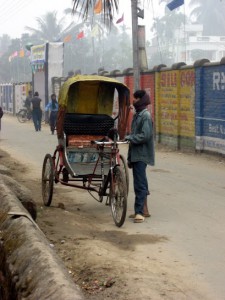